When people tell you to keep your toddler in a crib as long as is humanly possible, heed their advice! With night time potty training on the horizon, we succumbed to the big boy bed for our 3-year-old son, and our household has turned into the Wild Wild West.

What started out as liberating, with Wade getting out of bed to take himself to the potty, has given way to another power struggle. You can’t make somebody go to the potty, and you can’t make him sleep, especially when given free reign inside his room. Even my go-to bribes aren’t working anymore.

As I type this, it’s “naptime.” I can hear “I’m a Little Teapot” playing on Wade’s Echo Dot – his selection – as well as some unidentified noises I hope aren’t anything especially destructive. (We nixed the video monitor idea because I didn’t want to obsess. Ha! Who’s obsessing?!)

A couple of days ago, during a feeble attempt at some consolation quiet time, Wade decided to build a slide (his word) made of pajamas, bathing suits and books he rounded up from various parts of his room. His plan was to climb said slide to the top of his chest of drawers so he could reach the wall clock. He was then going to move the clock’s long hand to the 6, and voila, it would be 3:30! Naptime would be over.

I had to chuckle at the ingenuity. Luckily his engineering wasn’t exactly sound, and no bones were broken.

Ironically, today, while I was writing the last few paragraphs, Wade called out for me, saying he was up high and couldn’t get down. I went in to find him on top of the chest, which he had reached by scooting his crib-turned-toddler bed over to it, and he had the clock in his hands. Calmly – because that’s how the experts say I should be – I got him down, pushed the crib back, and left him there in his mess of a room.

Moments later, Wade opened his door, and standing at the baby gate I’d put in his doorway trying to stem the tide of crazy, he held up the clock. It read 6:30 thanks to his handiwork. 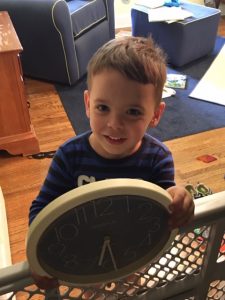 Sometimes you’ve got to laugh to keep from crying, especially considering that in the middle of all this, Wade woke up his 21-month old twin brothers who had been sleeping peacefully next door…in…their…cribs.

To those who aren’t moms, or are far-removed from having toddlers, it might seem bizarre how proportional my sanity is with the length of my children’s naps. But here I am, and it pretty much is. Their sleep equals peace equals 3,000 things I can do that I can’t when they’re awake. It’s my reset button between a busy morning and a busy afternoon. Sometimes it’s a shower, a nap, an important phone call, or maybe if I’m lucky, all three. Lately I’ve just taken to writing, so at least I can attempt something productive even if I’m interrupted every few sentences.

All in all, I’d say I’m handling this transition about as well as Wade is, which is to say, I’m wackadoodle on sleep deprivation.

And yes, I’m well aware of how lucky I am he has held on to his nap for this long. (Wade turns 4 in February.) And I know this probably means he’s ready to give it up, though I’m not fully convinced either. Wielding power has just proven more fun than sleeping. Wade is still exhausted by the end of the day when he doesn’t nap.

I concede that bedtime is a virtual breeze when he doesn’t nap, and when he does nap, mind games shift to bed time. I got a workout the other night just walking up and down stairs taking Wade back to bed. I’ve been attempting the “Super Nanny” technique where I walk him silently back to bed and kiss him on the cheek. Let’s just say I’ve been giving lots of kisses lately. And I have to hold back the laughter when he says, “Why you not talking, Mama?” He doesn’t usually have to wonder what I’m thinking!

In my back pocket this whole time has been a conversation I had with our pediatrician whom I adore, and she’s given me the green light to put a lock on the outside of Wade’s door. Her only caveat is that I unlock it after we go to bed. (Ethical questions abound, I know. Another blog for another day.)

In the midst of a recent power struggle with Wade, I asked my husband to order a lock from Amazon. He installed it when he got home from work today.

My go-to book on sleep training says you should take your child shopping for the lock, let him see you install it, and explain the implications of it before you actually use it because chances are you’ll never have to.

I neglected to do any of that. In my desperation one recent bedtime, I threatened using a lock before I actually had one. Wade’s response was something along the lines of, “A lock? Hey, great! Here’s something else I can get Mom talking about rather than going to sleep!” Then he told me he wanted me to put a lock on the door.

Wade saw the lock on his door tonight before I had any idea what I was going to say to him about it and before I had any intention of even using it yet. But there he went again, telling me he wanted me to lock his door. So what the heck, I did. And without one iota of a fuss – probably in large part because he didn’t nap this afternoon – Wade was out like a light.

I realize I’m pretty foggy-headed at this point, but I have no idea what all that was about. Maybe my 3-year-old is just enjoying keeping me guessing. The only conclusions I’ve been able to come to here recently are: hey, at least he’s got the night potty training down now. Transitions are always hard. I love and adore that little rascal even when he shows up at my bedside in the wee hours. And going forward, I’ll be that much better prepared when the twins ditch their cribs.

That’s what I’m telling myself anyway. One of our twins, Johnny, has been practicing climbing in and out of Wade’s toddler bed the past few days. He slowly lowers himself down to the floor, lands proudly on two feet and smiles up at me. Lord help me now.