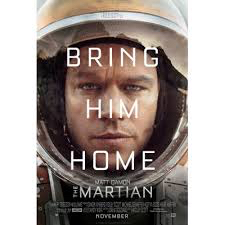 Reviewing this film was a family affair. The hubby plowed through the book written by Andy Weir and was eager to see the story on the big screen. My son is obsessed with space (he explained to me in detail why Pluto was no longer a planet and also highlighted the time paradox in Back to the Future) so he couldn’t wait to see it. So our daughter headed offf to grandma’s house while we went to watch what I lovingly refer to as “MacGyver On Mars.”

I was a little nervous taking my almost 12 year old to see The Martian since we know from the trailers that Matt Damon does drop the F-bomb, but if you were left behind on Mars, wouldn’t you? The most inappropriate stuff was actually shown before the movie even started in the previews for other movies. So except for one “medical emergency” scene in the beginning and a brief rear end shot the movie was suitable for his age.

The Martian is the story of NASA botanist Mark Watney (Matt Damon) who is separated from his team during a mission to colonize Mars. Presumed dead, the team leaves Watney behind during a massive storm and begins their long journey back to Earth. Watney survives the storm and realizes that not only is he stranded all alone, but that he has only a few months of supplies. He has no way of contacting NASA and the next planned mission to the planet is years away. That is when I would probably drop an F-bomb, curl up into the fetal position and cry. Luckily for us, Mark doesn’t give up. He decides to take stock of his situation and “science the sh*# out of this” to survive.

Matt Damon does a fantastic job of giving us a great character to root for. He shows us the vast range of emotions that Watney experiences–from early cockiness, to hopelessness, to steely resolve and the overwhelming loneliness of a character starving from lack of human contact (and a severely rationed food supply).

Another real star of the film is the planet Mars. Ridley Scott is known for creating amazing worlds whether in space (Alien), the future (Blade Runner) or even ancient Rome (Gladiator). His version of Mars is so detailed and realistic that you forget that we haven’t yet seen Mars with our own eyes. Scenes aboard the NASA ship Hermes are also technically amazing as the crew zooms around gravity free. While we saw the movie in 3-D, I think it would look amazing either way.

What is most uplifting in the film is the fact that the entire world becomes involved in the fight to get Mark Watney safely back to Earth. “Bring Him Home” becomes a rallying cry across the globe. You too will be cheering for Watney in hopes that he makes it back home. It doesn’t hurt that my son got the message loud and clear that science is cool and with it you can achieve amazing things. He also got to see that when you encounter a problem, you work through it and use your smarts come up with a solution. That’s not a bad lesson to take home after a fun Saturday afternoon at the movies!