Home Entertainment Check out our new Smarty Movie & Netflix Reviews!
EntertainmentThings To Do

What makes a great movie? A terrific plot? Interesting characters? Music, costumes, scenery or special effects that transport you? Or should a movie be considered great if it causes a genuine emotion–you are left tear-stained and grasping for tissues, your stomach hurts from continuous laughing or your heart rate has tripled in fear. Maybe there is a valuable lesson or a takeaway message in the story that stays with you? There are so many ways to critique a film and so many methods to determine if it is worthwhile.

Going to the movies costs a lot of money (especially when you factor in sitters and popcorn) and takes up valuable time. My goal is to help you find movies that entertain, thrill or inspire you and I will break it down into four categories:

1) This movie is amazing and you need to see it in the theater right away!
2) It’s a pretty good flick, try to squeeze in a matinee.
3) It was ok, rent it and watch from your couch.
4) Avoid this movie at all costs!

But wait! Not only do you have new releases to contend with, but now we have Netflix, Hulu, Amazon and many more streaming at the touch of a button available (not to mention Red Box at the entrance to every Harris Teeter!). What’s a girl to do?

So imagine that rare night when the stars align–the kids are all asleep and you actually have the remote all to yourself! You turn on Netflix and scroll around–not only are there countless movie options but you’ve got TV series, straight-to-video flicks and even a bunch of Hallmark wannabes to contend with. I will also highlight some couch-worthy films that are definitely worth viewing.

So without further ado, I bring you a terrific little movie for your couch date with Netflix: 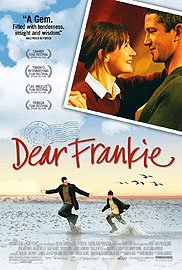 One universal theme among moms is “Am I doing what is best for my child?” We constantly worry over all of the decisions we make and then second guess our choices. I think we’ve all told a lie in our day in order to protect our loved ones and we stress over whether or not that was the right thing to do.

That’s why I would love to share a little gem of a movie that is currently streaming on Netflix called Dear Frankie. Released in 2004, Dear Frankie brings us into the world of Lizzie (the always delightful Emily Mortimer) and her nine year old deaf son Frankie (Jack McElhone). We meet Lizzie as she and Frankie are packing up their small, shabby apartment, another in a long line of moves, with Lizzie’s chain-smoking beleaguered mother (Mary Riggans). As they settle into their new home in Glasgow, Lizzie is afraid to even accept a part-time job in the shop below her apartment as she doesn’t know how long they will be staying. Their move brings to light a secret that Lizzie has been keeping for years. She has been writing letters to Frankie posing as his absent father who she pretends is working at sea aboard a freighter called the Accra. Frankie keeps track of the ship’s travels and writes back to a post office box set up by his mother. This plan seems to be working until Frankie learns that the Accra will be docking for a few days in their new seaside town. Lizzie is desperate to keep her son’s heart from being broken and decides to have a stranger pose as his dad for the afternoon.

It doesn’t hurt that the part of the stranger who agrees to act as Frankie’s dad is played by Gerard Butler. [This is NOT the Gerard Butler character you think of from The Ugly Truth or 300. This is the sensitive and talented Gerard Butler from Phantom of the Opera, another terrific film]. Butler is perfectly cast as a man without a name pulled out of nowhere suddenly pretending to be someone’s father. As he spends time with Frankie, their awkward relationship quickly blossoms–leaving Lizzie confused and somewhat jealous of their sudden friendship. She sees what Frankie is missing by not having a father present in her son’s life and can’t help but be drawn to this man as he bonds with her son. Not to spoil anything but there is one wordless scene between Lizzie and Frankie’s pretend father at her doorstep that is just complete perfection!

Shot on location in Glasgow, Scotland, this quiet little movie slowly and beautifully draws you deeper into Lizzie’s troubled history. Emily Mortimer does a fantastic job portraying Lizzie’s struggle as a mom who has emotionally shut down, unable to move forward as she fights to protect her child from their tragic past. This movie really did stay with me long after the credits rolled, thinking about how moms strive to do the right thing, how easy it is to let fear take over and prevent you from trusting and believing in others and just how important it is to ask for help and be open to receiving it. While steeped in sadness, Dear Frankie is overall an uplifting and heartwarming love story.

Smarty Fall Family Fun at the US National...

Mark your calendars for the CMOMs Consignment Sale...

The 2018 Smarty Camp Guide to the rescue!

Great recommendation — “Dear Frankie” was a perfect movie choice for a rainy Friday evening! I really enjoyed it and would’ve missed it without the advice. Thanks!