Well, the insane fall soccer tryouts in May are finally over and we survived.  Both of my children (U9 and U11) made a team, so they are happy.  It was touch and go there for a while last week.  As I have had time to reflect on the process, a few things stand out for my daughters’ tryout experiences. 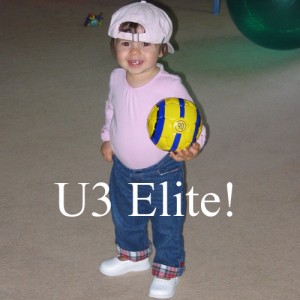 Being ‘Elite’-The big deal here the that the NCYSA (North Carolina Youth Soccer Association) has introduced a NEW ‘Elite’ program at this age, which roughly translates to “if you’re not good enough to be ‘elite’ at age 10, you might as well hang up your cleats.”  I’m only half joking, because my ‘always an optimist’ daughter was ready to quit soccer if she didn’t make the ‘elite’ squad.  I told her that was nonsense and she should play no matter what team she made.  Remember, for me this is all about staying active.  See link here

You see you shouldn’t think of these as tryouts as such.  You know how in school when you were learning to read it was all about finding the ‘Just Right Book’ – one that’s not too hard and not too easy?  Well, these tryouts are about finding the ‘just right team’ for you in soccer.  Competitive, but not overwhelming.  You can be good, but not dominate.  You may be ‘Elite’ or you may be at the bottom.  I can’t tell.  The most important thing is to try your best so you get put on the appropriate team.

Parent Stress– The end of the school year and end of the season are full of activities (school projects, school performances, EOGs, start of swim team, Memorial Day preparations…) and soccer tryouts are just one more thing to do.  I was surprised at the number of families that had both parents show up for the tryouts.  Not too many of them were smiling or laughing like they usually do at practice or games during the season.  Clearly the stakes were higher.

Player Stress -There appeared to be over a hundred players trying out for the U11 age group.  It was intimidating for my daughter to look out at that many kids and try to figure out where she fit in that group.  The main coach called out names for groups (teams) and the kids went off, did some skill drills and scrimmaged the rest of the time.  I was impressed at how hard the kids played for the ENTIRE tryout (three hours over two days).  That’s a lot to ask of a ten-year-old.   With that said, it did appear that some kids dropped out of the process after the first day and decided it wasn’t for them.  Better to realize that BEFORE you pay your commitment fee.

Let’s be honest here.  There’s definitely a pecking order to the teams and the scrimmages were a way for the coaches to decide about players on the bubble.  I’ve coached enough teams and been through enough tryouts to know how the game works.  Even the players figured this out pretty quick.  That’s why my ten-year-old was ready to quit soccer and take up flag football when she realized she probably wouldn’t make the ‘elite’ squad.

I saw a player sprain her ankle and she was paralyzed with indecision about what to do.  Keep playing on it because it was a tryout or take a break and rest it.  Her mom was equally conflicted about it.  The supervising coach told her to take a break which she did for a few minutes to consult with her mom and then ran back on the field.  She seemed like she was in a fair bit of pain, but decided to tough it out.  I realize that decisions like that are part of life even at 10 years old, but I felt bad for both of them.

The U9 tryouts were far more relaxed than the U11 tryouts.  Part of it was that we’ve been there and done that, and it was a breath of fresh air after seeing over a hundred girls at the U11 tryouts the day before.  The stakes are lower since there is no ‘Elite’ U9 team…yet (I’m sure it’s only a matter of time though).  It was the same format of tryout, but with a less obvious pecking order to the teams.  Also there were far fewer kids trying out, so that made it easier too.  There was definitely some apprehension among the parents, but noticeably less than the older group.  Everyone was just happy to make a team with the club and was not worried about the ‘level’ of the team.  Quite refreshing.

Two questions came up from a lot of parents that I have been able to research and answer:

1-Why are tryouts so early in the year?  It is because the governing body NCYSA stipulates that tryouts can occur any time after the State Cup Tournament in the spring, so it’s an arms race.  It would be nice if they would change the date to the end of summer.  At the same time, the NC clubs play against clubs from across the country and the more time the ‘elite’ teams have to practice together the better they will perform against teams from other states.

2-Do all the clubs have to have tryouts the same week?  The short answer is no, but the practical answer is they always will because they all want the best players to commit early to their programs.  Good players translate to better on field results, happier parents, good press and the program grows.  It’s a vicious cycle.

Here’s my question Smarty Parents: Aside from ditching them altogether, what small changes would you like to see in the ‘travel sports’ world that you think would make them better?

Talking to Children about Touching Safety

Jump into fall with Jumperoo at Urban Air...

Fall at Disney: Tips to Get Best Deals,...

I think travel sports are 100% a business enterprise. Look at the new soccer complex that CSA is building and sponsored by Orthocarolina. This is a BUSINESS, nothing more than that. They are creating a need, demand, schedule and parents are hook/line/and sinker. Kids and parents are drinking the kool-aid at a young age thinking that if you don’t encourage your kid to try out, you may be setting them back on that sport. My thoughts are, wait until your kids REALLY want to do this, in this case, yours did. This is something that she sought out, so it was the perfect timing for her and you. But in many cases, parents feel like they need to do this competitive gig so young. But what you need to look at is the future. How much will this really cost and be honest with yourself about travel expenses, uniform expenses, etc. Then ask yourself how much this will affect your family as they get older and into the more competitive teams. How much time will your family be split up on the weekends? How many kids do you have? How are you going to manage all of it and what exactly are you aiming for? Are you wanting your kid to get a college scholarship with that sport? If so, do you really think they are going to stick with the same year-round activity since kindergarten? May want to invest that time and energy in a college fund and call it a day. OR are you just wanting them to play on a team and eventually make the middle school/high school teams? This can be done in a recreational environment too. There is NO DOUBT that the level of skills that your kids will receive in a competitive league is way better than rec – their coaches are paid to do this. But what so many parents are missing is that no matter how much training you give a child, if they don’t have that particular athleticism/drive/physical ability, your child may not ever achieve the level that you are hoping for. They have to want it/need it for themselves. I’m a firm believer that an athlete is an athlete is an athlete. Some are born gifted. Period. So don’t get mad at those athletes when they just roll into a new sport, pick it up and are better than all the rest with less training. Call me old school:-)

One more thing, sorry, my response is RIDICULOUSLY long – I do believe in competitive sports when it’s right for the right child. Meaning they have to prove to you that this is the #1 sport for them. At that point, go all in. The skills they will receive will be far superior. But let kids be kids and try out a lot of sports before you settle on one. There is a reason for seasons. Year round doesn’t necessarily mean it’s the right fit for you.

Like your response Jen. And I know you were a playa so you speak from experience. You can’t create a star athlete. The kids have to have the inate talent AND want it. What has happened to us? I feel like as parents we are all pressured to succumb to these types of teams and leagues but in reality, let ’em play and let mama’s car rest. I struggle with it too and and the expectations are in every sport. It’s just the way it is now and I feel like we as parents should regroup.