Youth Soccer Craziness (aka Fall Soccer Tryouts in May)

My kids love playing soccer.  So far we have done Y clinics and leagues and one club team.  It’s fun, social and keeps them active.  As the spring soccer season comes to a close, it’s time to think about what we are going to do next year.  Can you believe that it’s TRYOUT season for the region’s soccer clubs NEXT WEEK for the FALL season (yes, almost three months before practice starts).  My daughters are only eight and ten, yet it feels like their entire athletic/soccer future depends on my making the ‘right’ decision about which club/location to join.

Why are my only choices the ‘everyone gets a trophy’ league OR the ridiculously intense/competitive clubs?  Why is there no middle ground, especially as the kids get older?  We should just join the masses and quit organized sports! 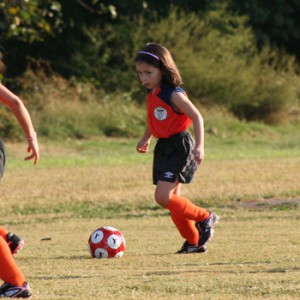 Long before I had kids, I read an alarming statistic that over 70% of kids quit organized sports by the time they turn 13, so I feel a need to make sure my kids are progressing enough athletically that they will be able to make it onto a middle or high school sports team.  I’m not looking to turn them in to superstars, but rather just semi-competitive athletes that can make a team and compete.  Being active and in shape is good for them in so many ways that I can’t have them quit just because it’s a hassle for me.

Here are my main concerns as the intensity ramps up and I go through my decision-making process:

Injury.  As the number of days and hours per week devoted to soccer ratchets up, I worry about wear and tear on the body.  Two to three practices a week, plus two to three games on the weekend are asking a lot of young bodies.  With all the clubs I am talking to, I am asking about their injury-prevention programs.  Unfortunately, so far it is up to the individual coaches as to whether use the Santa Monica Sports Medicine PEP program to reduce knee and overuse injuries.  While it does take time away from technical training, the significant reduction (~50%-80%) in knee injuries seems worth the time.

Here is the link to an article on the program from a sports parents’ blog (2012): http://www.momsteam.com/health-safety/PEP-exercise-program-reduces-acl-injuries-in-female-soccer-players

And a more recent link from the New York Times (March 2014):

Burnout.  All the time and energy devoted to practices and games takes away from the necessary downtime all kids need to recharge and play with non-sports friends.  Not to mention time for schoolwork!

This is INSANE!! They are only eight and ten years old.  I love them to death, but chances are they will not be on the US Women’s World Cup Team nor will they likely be Division 1 college athletes, so why am I so worried about this?

Here is a good resource I have found to help me keep some (not all) of this in perspective.  This site has lots of good articles and suggestions for helping your budding athlete through the ups and downs of sports:  http://changingthegameproject.com

(It’s a ‘Race to Nowhere’ type website for youth sports.)

Logistics.  Can I get my child(ren) to and from practice/games without Herculean efforts all the time?  Once in a while is ok, but everyday is not worth it.  Until now, I have picked the program with the practice location closest to my house and it has worked out fine.

Ok, so I called one of the club programs in town to ask about practice locations for U9 and U11 girls and was told that they couldn’t give me any answers until mid-JULY!  He gave me possibilities (some close, some far), but nothing definitive.  How am I supposed to make an informed decision with that type of info?

Cost.  When you start adding up all the costs of club soccer, it is expensive.  With multiple children in the program, it can get out of control quickly especially with traveling and tournament fees.

So you want me to spend over four figures on your program and you can’t tell me where practice will be until months AFTER I commit?  Wow!

Fit.  Will my child like their teammates and coaches?  Heck, will I like the coaches and other parents? Or will will the other parents drive me crazy as I sit on the sidelines for endless hours every weekend.  So far I have been very lucky and have really enjoyed 99% of the parents from my kids’ teams.  I do like the club soccer emphasis on only ‘positive cheering’ from the sideline.

Are the other parents over or under committed to the team?  Will they bail on the out-of-town games/tournaments and leave the rest of the kids dragging from too many minutes?  Or will they constantly be mumbling under their breath their kid should be playing more?

We had an incident last season when a few of the parents were tempted to go and talk to the OTHER team’s coach after the game and tell him to calm down.  The coach could have been from an episode of “Friday Night Tykes.”  He was out of control and just plain mean to his players, but the parents of his players didn’t seem to have a problem with it.

What are your thoughts on rec sports vs. competitive sports? Weigh in on your experience Smarty Charlotte!

Another Bargain Shoe Spotting from a Smarty Desperately...

Get her dance on with Jami Masters School...

When Do You Tell Work You’ve Got a...

Dicey subject! Like most things in parenting, each kid is unique and will find sports or other extra-curricular programs that fit into his/her life and family. Parents do have a lot of “homework” to figure this out and of course some of the figuring out occurs by trial and error. Some programs are better than others at communication which is key for me. Location is also important as is the flexibility needed to arrange carpools. I think the most important factor is customer satisfaction – where the kid is the customer. If he/she is not happy, it’s definitely not worth any of the trouble.