My husband was running the other day when a couple cuties tried to sell him lemonade. The exchange apparently went something like this:

Our digital-age children may be savvy, but they still need good ol’ fashioned financial principles. My husband and I may not be able to teach 2nd or 5th grade math well, but we can teach our kids how to become economically stable and even thriving adults. At least, we can try. I’ll be honest though. We failed in our first efforts three years ago, eventually giving up on an allowance system. We made rookie mistakes: 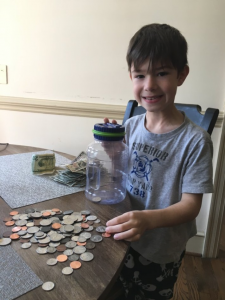 – Inconsistency – One month we’d be on it. The next, well, life.

– Confusion – In the heat of the moment, it was easy to punish by taking away dollars (sometimes until they were in debt–ugh).

– Short-Sightedness – We knew allowance was a key to-do for teaching responsibility; however, we neglected to examine the why-do and how-do.

Not this time around though. Things are going much better! Here are 5 tips on what’s helped if it can help other (already-overwhelmed-amidst-pandemic) parents out there just trying to do their best. Not to mention, allowances are great ways to teach social studies and math skills without ever having to log on to remote school.

1) Borrow from Both Banks of Thought – This Forbes article was a game-changer. We felt trapped in either-or thinking; we wanted our children to connect hard work with earning potential; however, we also wanted them to help around the house simply because they live here too. The answer: a hybrid approach. Certified Financial Planner Liz Frazier writes, “Give your child a set amount of money each week as allowance. This should not be tied to any chore or job. Make it clear to them that as part of the family, they are expected to do certain daily chores…Tell your child if they want to earn additional money, they can do other jobs around the house.” 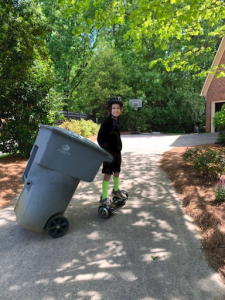 2) This Little Piggy Went to Market (and the ATM) – Children do well with tangible allowance, but getting to the bank for cash is one more chore for us. We needed it though because we were going to split amounts for donating, saving, and spending. This makes my head hurt, so I keep a note on my phone and reminder in my Google calendar: denominations to select at an ATM once a month on my grocery errand. It reduces the stress and keeps me honest.

3) Share, Spend, and Save but… for What? & IO(ohhhhh)Us – We teach that allowance is not all fun money, but “saving for a rainy day” can be difficult to grasp when you’re young. It doesn’t take long though. When one of them leaves a bike helmet under your car and you hear a crunch? Lesson learned. I also did loan a few extra dollars at Target in a weak moment, but that was also a good way to teach the pain of pay back. It was so sad to watch my daughter watch her “spend” jar be nearly depleted the next month, yet she has not asked for an IOU again, so… 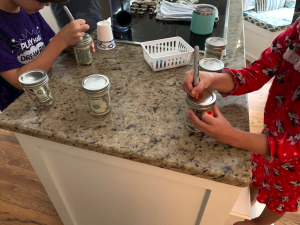 4) Make it Fun, but Buckle Up. – It won’t always be fun. That IOU and helmet sitch? It resulted in tears–both my seven-year-old’s and mine. As older generations say, it hurt me more than her, but hard lessons now make future, harder ones less likely. I held my breath and waited. She stormed upstairs, distraught. Sure enough, she came back down half an hour later alive and (mostly) well.

5) The Return on Investment? Now when our kids see they can’t afford something they want, they let the money pile up. Or, even better, they make their own version of it–as happened with the American Girl RV still out of reach (the cardboard version actually hitches on and wheels behind the more pricey AG convertible–and don’t you just love the detachable paper towel canopy?)! All her imagination. 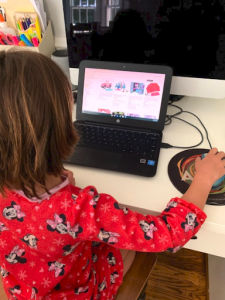 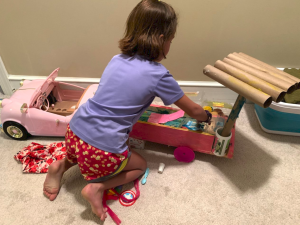 Sure, it can be tough to watch them buy junk and regret it–especially while saving for something more valuable–but they’re learning from that too. And, they’re becoming smart shoppers by noticing deals and shopping around before purchasing.

Even through tears, a well-planned and executed allowance system will pay off. 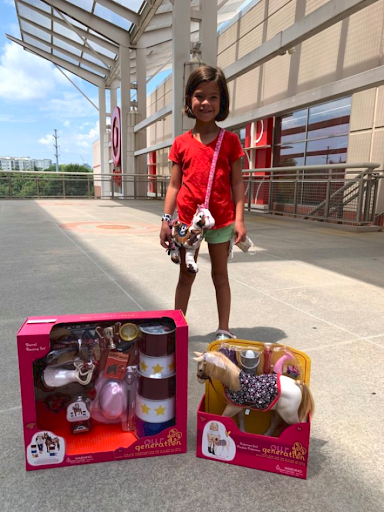 Shannon Blair is a professional writer and certified nutritionist. Most importantly though, she is wife to Sam and "Mommo" to Jay and Nora. She can be spotted getting muddy in the garden, wreaking havoc in the kitchen, relaxing with a local craft brew, at the barre (as in Pure Barre), reading, or trying to figure out which story to tell next. Stop on by and see how she can help you tell your stories too at pinkpenwriting.com. Or pop on over for some of her recipes at lessismorenutrition.com.