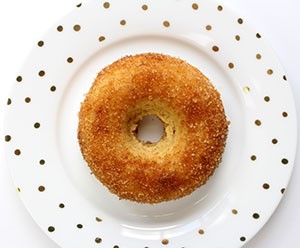 This weekend, we are in the throes of deciding on Halloween costumes. Typically, we attend a Halloween party that requires all of us to dress up. And our gracious hosts go all out. They LOVE Halloween. Their house is decorated from top to bottom. Their lawn is transformed into a spooky graveyard, their front porch is covered in cobwebs laced with creepy spiders. An animated witch stands guard at the door. As such, one cannot simply wrap themselves in a sheet and claim to be a ghost or a Grecian goddess. Much thought goes into our costumes and they sometimes require several weekends of planning and execution to complete.

Of course, our son chooses to be a character from his latest TV show or video game craze. This year it’s Minecraft.

As for my costume, I search Pinterest and pick something that requires minimal crafting abilities (I can bake, my friends, but gluing and sewing are another matter).

My husband always chooses something that will garner the most laughs. Last year, he put himself in a box. It was hilarious. This year – he proclaims – his costume is a surprise. I can hardly wait.

My daughter, on the other hand, wrestles with this decision every. single. year. She’s not much of a screen watcher, so she doesn’t get inspiration from a show or movie. When I suggest a literary character, she scoffs. I let her scour the (thousands) of magazines that arrive in the mail to get ideas. Nothing ever strikes her fancy. I call out every “standard” costume under the sun: a witch, a ghost, a pumpkin, a mummy, a piece of candy. “No!” is her response every time. Typically, on the morning of Halloween, she’ll decide on something we have on hand. Last year, she dressed as her mother. I’m not kidding.

Naturally, the stress of all this sends me to the kitchen. And because (despite the weather), I am in a Fall mood, I made these baked Apple Cider Donuts. They are so simple to make, they taste of the season and they are seriously good! They make me forget all about our costume woes! 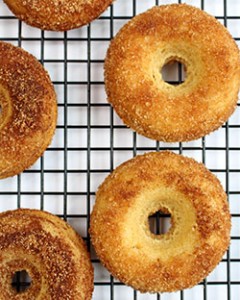 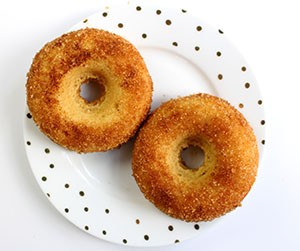 Grease a 6-count donut pan with a light coating of oil.

In a small bowl, whisk together the oil, cider, honey and egg until combined.

In a medium bowl, whisk together the flour, baking powder, salt, cinnamon, nutmeg and sugar with a fork until combined.

Add the wet ingredients to the dry and stir until incorporated.

Transfer the batter to a piping bag or a gallon-size disposable bag with a small hole snipped from the bottom corner.

Pipe the batter into each of the donut cups. You’ll fill each one nearly to the top.

Bake for 7 minutes. They’re done when the tops feel semi-solid and the dough springs back when poked.

Remove from the oven and allow to cool in the pan about 2 minutes.

Transfer the donuts to a rack to cool for another 15 minutes.

Meanwhile, prepare the glaze and topping.

In a shallow bowl (like a soup bowl), whisk the oil, cider and honey with a fork.

In a second shallow bowl, whisk together the sugar and cinnamon until uniform.

When the donuts have cooled slightly (they’ll still be a bit warm, but not hot), dip each donut into the oil and cider mix and turn until coated. Do not let the donut sit in the liquid or it will disintegrate!

Then roll the donut through the cinnamon-sugar mixture until coated evenly.

Replace the glazed donut on the rack to finish cooling.

I store these in a sealed container at room temperature for 24 hours. Then they get moved to the fridge for up to three more days.

From the Smarty Education Corner: More Than Just a School, We Are A Community: Get to Know The Fletcher Family

My latest crush…The Produce Box (P.S. You could...

Adorable site. Heard you had a log. I’m home nursing a repeat “cold”. It’s great to see your creative ideas. Of course, we all delight in Midwest recipes. Miss you all! Love, Cece