Home Parenting Club Soccer Year in Review
ParentingThings To Do

Well, it’s that time of year again around my house. Time to decide if we are playing another year of club soccer. It has become an annual hand-wringing exercise about balance, free time, family time, money and “fit”. Soccer “Evaluations/Assessments” for area clubs begin in earnest this week. Club soccer has pretty bad reputation these days in a lot of parenting circles. It’s stressful, consumes family time and wears out your family. I was apprehensive going into this year about its effects on my daughters and our family in general. Last spring, I wrote extensively about my thoughts before and after the tryout process, so here’s an update on where I stand after a full year of having two kids playing club soccer.

My U11 daughter played on a Classic level team that was part of the NCYSA Open division league. This is really the first “competitive” level of soccer in that scores and standings were kept for the season and over the course of the spring and fall seasons, we had home and away games against almost every team in our league. Originally scheduled as one and occasionally two games per weekend, spring rainouts proved a doozy. In league play, all games must be played by a certain date, so we ended up with a brutal stretch of makeup games at the end of the season. We played our final eight games over a fifteen day period (at one point seven games in eleven days) with three of the games played during the week at 7:00 pm and the closest one was a half-hour away WITHOUT rush hour traffic. While the players seemed to enjoy it, the parents on the sidelines were questioning their sanity.

My U9 daughter played in the local Youth Academy league where score isn’t kept (except by the players and some parents) and almost all the games are in Mecklenburg County, so what seemed competitive and lot of work last year, when I had one club soccer player, seemed easy this year. It’s all about perspective. It was also nice that they didn’t have to make up all the rained out games this spring.

As the fall began, I was very concerned about the impact of so many practices on our family. We had three soccer players (two club and one rec league), so that meant we had practice five nights a week and at least three games every Saturday and occasional Sundays. Fortunately, soccer was an overall positive for our family.

Although getting homework completed and having “quality” meals were a concern at first, it all worked out pretty well. Ironically, since we had daily practice, we were able to develop a predictable daily routine and the kids were in bed by 8:30-9:00 most nights. We came home from school, had the obligatory snack to prevent starvation, and did homework so we could be out the door by 5:00 to make it to practice. The routine helped the kids do a better job of getting their homework done than they did during basketball season when we had only few nights of practice.

While I could have arranged an extensive carpool system to ferry my kids to and from practice, I only used one on Wednesday nights when we had competing practices at two locations thirty minutes away from each other. I decided that, whenever possible, we would all go to all the practices. There were extensive playgrounds at every practice location along with random groups of kids of similar ages, so while one child was in a structured sport, the other three were engaged in extensive unstructured play for an hour and fifteen minutes a day. It worked out great.   My kids had plenty of outside time and very little screen time during the week. It just happened to be at a different location every day. 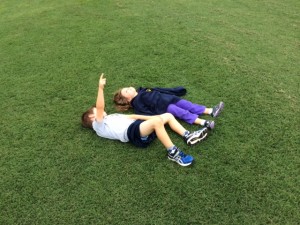 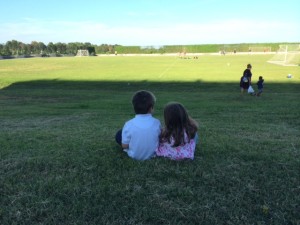 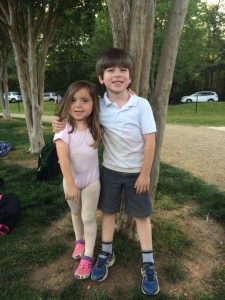 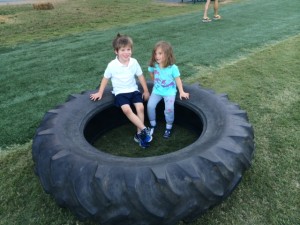 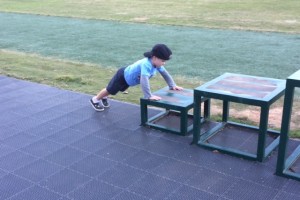 We made the best of the car time to talk, catch up on each other’s day and make up complete nonsense games to play in the car. We managed to eat dinner together every night, even if it was 7:30 pm when we finally sat down eat our very simple meals (meat, starch, vegetable/fruit). In the spirit of full disclosure, I did allow myself a “get out of jail free” card once a week and ordered Domino’s on the way home from practice.

We had very busy weekends. However, I was pleasantly surprised that in the course of playing eight soccer tournaments, we only had to get a hotel room for one of them. The rest were close enough to make it a day trip and come home at night. It was definitely a case of “divide and conquer” parenting. It is also helped out tremendously that I am a stay-at-home parent and got most of the housework (laundry, shopping, school projects, etc.) done during the week. This could be a tough road for dual-career families or single parents.

How Much Time Did We End Up Devoting to Soccer?

The total time we all spent at these practices and games added up to almost 17 hours (including transportation) a week for soccer– a solid part time job for me. Keep in mind that averages out to just over 5.5 hours per kid per week which doesn’t seem unreasonable. The girls were also able to fit in band, Girls on the Run and school choir while playing club soccer, so it wasn’t like participating in soccer precluded all other activities. It was just one of several activities they participated in this year.

The Toughest Part of the Year – Transitioning Sports

This year, I realized that during the middle of the season it really wasn’t that hard to keep up with everything going on with three kids playing sports. The real problems lie in the transition between sports. Fall soccer to winter basketball back to spring soccer was a challenge. Both transitions had multi week overlaps, where we had practices and games for both sports and it was a lot. One weekend this spring, depending on the results of tournament games, we were in line to possibly have NINE games (four soccer and five basketball) over two days. “Fortunately” the problem was “solved” with two basketball losses, so we only ended up with seven games. Go Team!!

Neither of my daughters played on a winning soccer team this year (basketball went better). Their combined winning percentage hovered around 30%, but they were okay with that. Over the course of the season, they had moments of frustration and disappointment, but overall they kept a good positive attitude in the face of the mounting losses – even after the Saturday when they each lost two tournament games by a combined score of 44-4! They never complained about having to go to practice, looked forward to their games and always wanted to play/practice in the yard to improve.

We would “break down” their games in the car on the way home. Basically it consisted of me asking them how they thought the team played and listening. Since they know that I was once a mildly successful high school girls’ varsity soccer coach, they often asked my opinion on their performance. Generally, I tried to tell them at least two things they did well and no more than one “opportunity for improvement.” I tried my best to let their coaches coach and reinforced the lessons their coaches were emphasizing. Sometimes it was hard, but I think it’s best for my kids in the long run to learn to listen to their coaches.

Do You Want to Play Again Next Year?

Smarty Parents, how was your most recent experience with club soccer? Are you trying out again or is you child moving on to something else?

From the Charlotte Mecklenburg Library: Summer Reading—Avoiding the...

Hit Carowinds this weekend for KidsFest – a...

That doesn’t sound so bad…but I’m still not drinking the Kool-Aid…YET:-)