1. Emojis – Anyone else ready for this fad to pass? Not only do we no longer call anyone because we just text instead; now instead of words, we are using pictures. Am I a part of the craziness of emojis? *sigh * Yes. I am an offender. I took a look at the ones I use the most to give you an idea of what I emoji to my friends; it’s embarrassing.

– The Gun. This may be the most used. It applies to so many situations such as parent/teacher conferences, dinner with your husband’s boss, something stupid a friend says, or if you are actually being held at gunpoint. You see where I’m going here. I also exchange in the knife or the pill on occasion.

– The Chicken Head. I use this after I say something that is meant to be sarcastic but may not come across in text – kind of a CYA.

– The Bomb. If one more person says “Boom” my head is going to explode. I am determined to over use this.

– The Double High-Five. If you know me, you know I HATE high-fives. This is the only one you will get from me.

I seriously have friends that use these things more than words, especially the facial expressions. I can actually picture your face when you respond to my texts so I don’t need the help of emojis. I’m also over the poop emoji. Stop using it immediately. I only use that one when I need to pick up in carpool but we are running late because my daughter is on the toilet.

2. Facebook Stalkers – Ever notice those same people that like your picture or your post in less than 5 minutes? Yeah, those are your Facebook stalkers. My friends and I get a big kick out of the game called, “pick the stalker.” Everyone has at least 5 basic stalkers. Take a picture of something stupid like what you are about to eat (I hate these FB posts). Everyone has to pick who they think will like it first out of your stalkers. Or you are also able to choose the “dark horse” which is not one of your usual stalkers. Extra points if they comment AND like. We play these games for hours at Happy Hour Playdates. I have no life. 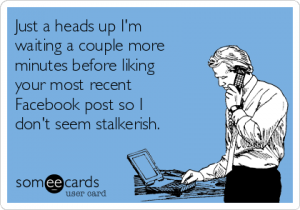 3. Under Armor – If I could have bought stock in this company 5 years ago, I would be a millionaire. My son is 8 and I feel like he owns nothing but this brand. Remember the days when you could dress them in cute gap jeans and fun t-shirts? Yeah, those days are over. I love that an Under Armor shirt with a collar is acceptable to wear to a nice dinner. These kids look like miniature college football coaches. And $65 for a sweatshirt? I’m wearing an Old Navy workout sweatshirt now and it costs $14.99. Something is wrong here.

4. Bad vacation etiquette from parents – this is a two-part statement. First part, when you go away for the weekend, please don’t post on Facebook about how much you miss your kids. We know your kids and we know they drive you bat sh*t crazy. When I get away for the weekend, I barely remember I have kids – let alone miss them when I’m getting a massage at the spa. Who do you think you are fooling? Second part; please stop taking your children to the Ritz for vacation. 5-year-old children don’t understand how amazing the Ritz in South Beach really is so it’s a waste of money. Take them to a Marriott or Holiday Inn like our parents did. I also guarantee that couple sitting next to you that paid $800 a night, don’t want to be at the pool with your kids either.

5. Fitbits – What happened to just going to the gym or taking a jog outside like normal people? My feeling is that if I have to spend $200 to wear a SERIOUSLY ugly device to tell me to turn off Bravo and get outside for a bit… I’ve got bigger problems. My employer just got us all Fitbits for Christmas with integration to our work computer system. This is my worst nightmare. So now not only do I have guilt when I sit around all day, but now everyone I work with knows I was lazy too? Um, no thanks. Oh, and when you are all dressed up for a night out on the town, leave the Fitbit at home. It doesn’t go with the cute dress and heels and you aren’t burning many calories as we consume wine sitting at dinner.

6. Kids that whisper in their parent’s ears – I am not sure why this bothers me so much. I guess because I translate it to how rude it would be if adults did this. To be honest, I really don’t give a crap what they are telling you because it’s usually something like they can’t find their shoes. But when I’m watching it happen it makes me self-conscious. Are they telling you they found a dead mouse in my bathroom? Are they telling you they hate the food I made for them? Do they not like my shirt? I MUST KNOW WHAT IT IS! Seriously, stop kids from doing this. It’s super rude.

7. Gluten – I know that I’m going to get beaten up for this one just like I did last time for the nut allergy comment. I understand that some people have a serious health issue to gluten, for those people – feel free to cut it out of your diet. But for those of you who just have to poop when you eat gluten… guess what? That is normal. We all have to poop. I get so exhausted with figuring out what to bring to parties in case people have a gluten issue. Sitting at dinners watching you eat a burger out of a piece of lettuce or asking for gluten-free soy sauce makes me want to not invite you out to dinner anymore. Also, the gluten free menu is always disgusting and I think I would rather crap my brains out than eat what you have to order off the menu. I also have those friends that won’t eat gluten but will eat spray cheese out of a can and a bag of oil and vinegar Lays chips. What sense does that make?

8. Birthday shout-outs to your husband on Facebook – Seriously? This cat is lying right next to you in bed. I’m sure he would rather have what most men want on their birthday. (Steak and guess what else?) Your husband doesn’t need you to profess your love to him out there. My favorite ones are the ones that say, “Even though my husband isn’t on Facebook, I still want to wish him a Happy Birthday!” What the funk?

9. Basketball ball hogs – We are in the heat of basketball season, which should be fun right? I hate it. Every single year we get on a team with one or two kids who consistently take the ball all the way down the court and shoot it even if they are surrounded. Best part of this is that these kids are usually the coach’s kids or have parents who are head coaches at some school. If this were my kid I would DIE! My husband and I sit at these games and I curse under my breath while he rubs his face the whole game because he is so stressed out. Everyone on the team notices this pattern of your kid game after game and can’t figure out if we want to wrestle him to the ground or wrestle his parents to the ground. I didn’t sign up to get up on Saturday mornings to watch your tiny child showboat all game and score one basket.

10. Tinder – This is really only on my list because I’m not sure I understand it. I hear people talk about it so I had to do some research. The things on this guy’s blog freaked me out. “For guys who love looking at pictures of girls in bikinis and frivolously casting a split-second judgment on them, it came pretty close to being the greatest thing since sliced bread. After a casual date or two, the expectation is that you’re going to have sex.” SAY WHAT???? And you can do this based off location? So, I’m at Harris Teeter and you are at the Starbucks at Stonecrest, and we kind of like each other’s pictures so let’s meet? I’m beyond freaked out by this notion. There are times like this that I thank GOD that I’m married. What happened to meeting people through a friend and having coffee and dating? Am I too old school? I’m seriously going to lock my kids up in the basement if this is what is waiting for them in the dating world.

11. Bad gym attire – Am I saying that you should all spend hundreds of dollars at Lululemon? Absolutely not. What I am saying is maybe wear a sports bra. Every time I go to the gym lately it’s like Halloween in there. Here are some of my favorites:

– The old guy in tiny shorts doing stretches in front of the mirror on top of a huge exercise ball. (I just lost my lunch.)
– The guy who forgot to bring gym clothes so he just cut the sleeves off his work shirt. (I took a picture of this one to prove it.)
– The older woman who likes to run on the treadmill without a sports bra and who is VERY VERY cold.
– The guy that bench presses huge weights and is very (excited?) while doing it. Get a room buddy.
– The woman who doesn’t want to mess up her new hairstyle so she wears a shower cap while she works out.

Come on people. I just want to get in and get out of the gym without feeling like I’m at the circus.

Stay tuned for Volume 3, I can’t wait much longer. This is just too easy.

So, Do You Think Your Child Could be...

Thank you for the laughs this morning! Can’t wait for volume 3.

Seriously the best laugh I’ve had in a while! You nailed it! “Boom!” (And if I was on my phone, I’d post multiple emojis here!)

Yes to the gluten one! How is it that everyone and their mother is all of a sudden gluten intolerant?