These are phrases used to describe Laline Paull’s THE BEES, and it’s true; reading this novel is like drifting into an acid trip that introduces you to unimaginable brand-new colors. (Important note: Speaking figuratively here. I’ve never actually tried acid.) But THE BEES is undeniably trippy; everything in it is both familiar and foreign, a dreamy, hushed Otherworld that operates according to fascinating, immutable and utterly un-human laws. 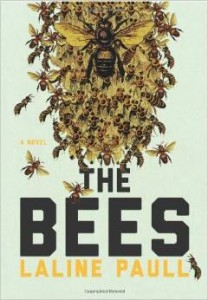 The story centers around Flora 717, a sanitation worker born into the lowest caste in her hive. Obedience, industry and sacrifice define the lives of the colony, along with worship of the Queen. Without question, the bees accept the instructions of the Hive Mind, which are communicated by scent, pheromones and vibrations, and they toil selflessly at their preordained tasks. Some are nursery carers, some are patisserie workers, some are foragers who fly into the vastness outside the hive to collect pollen. The female bees have the kin names of flowers: Flora 717, Sister Sage, Lily 500. The males, who are (ahem) giant buffoonish sex fiends, loll around like wasted frat boys, stealing everyone’s food and burping out lewd catcalls. There are very few males in the hive, though, and they are indulged and honored.

Without intending to, Flora 717 goes rogue right from the moment of her birth, escaping from the reviled drudgery of Sanitation as she discovers that she is different from all the other bees. Diversity, needless to say, is not a Hive virtue. Flora 717’s odyssey through all the areas of the hive—feeding babies in the nursery, braving the terrors of the outside world as a forager, flighting off enemy Wasps and Spiders—culminates with an act of unthinkable sedition when she must challenge every sacred instinct of the hive for the even more elementary pull of maternal love.

THE BEES avoids completely anthropomorphizing its characters—they don’t come across as small fuzzy humans—but instead are alien, otherworldly creatures who operate under unfathomable rules. There are all kinds of potential human comparisons—religious allegories, Animal Farm-type political messages, the nature of free will—but to me, the salient thing about the book was its inventive weirdness. The writing is lovely and the author’s imagination is staggering. I wanted to keep reading it because it was so different.

Take the Library with you on vacation