First time away from the kids is the hardest? 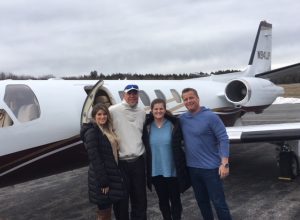 Chipper’s wife Taylor, Chipper, me, and B.B. Abbott, Chipper’s agent, standing in front of our ride

I am not one of those moms who has a problem leaving kids with a babysitter. I believe in balance. But somehow I got almost two years into parenting before I’d ever spent more than one night away from my son, and that was for my stay in the hospital having two more! (Our twin boys are six months old.)

Breastfeeding does that. I once took my mom and son on a work trip to Atlanta, so I could pop back to the hotel and breastfeed. So does living in the same town with family. Overnights don’t make much sense when people can sleep in their own beds.

But a little over a month ago, my former life came calling, beckoning me to take a trip out of town, and the only logical answer seemed like yes. Quick backstory: I used to be a sportswriter for the Atlanta Journal-Constitution. The main beat I covered in my 17 years there was the Atlanta Braves. That led to an awesome opportunity to co-author a biography with Chipper Jones, their superstar third baseman. And this past January, Chipper was elected to the Baseball Hall of Fame. He’ll be inducted in a formal ceremony in July. In March, he got invited to Cooperstown, N.Y., home of the Baseball Hall of Fame, for a personal tour of the museum as part of an orientation for his induction weekend. He got to pick two writers to join him on the behind-the-scenes tour, and I was one of the lucky two. 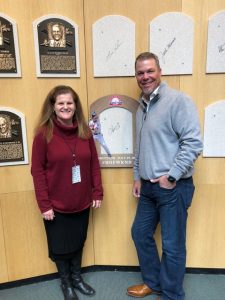 I knew what an unforgettable opportunity it was because I’d gotten to tour with former Braves pitcher Greg Maddux and manager Bobby Cox in 2014 before their Hall of Fame inductions. It was one of my best days as a sportswriter. The problem this time, though, was that my old employer wasn’t in position to foot the bill. Travel and freelance budgets had been slashed. When I texted Chipper to say I was sorry I wouldn’t be joining him on the tour, he wrote “Can you talk?” He proceeded to offer me a ride with him on a private jet to make sure I got a chance to cover it, even if it was for another publication. All I had to do was drive to Atlanta to meet up with him.

I immediately got a knot in my stomach because I knew I was going to say yes, and it would mean leaving my three boys for the first time.

Luckily for me, my husband said yes even faster than I was about to. He knew how much the trip would mean to me. He offered to take three vacation days to stay home with the kids. We knew our part-time nanny would be a big help too, as would my mom and sister, who rally for us all the time. 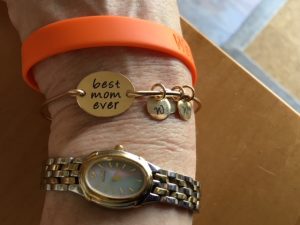 A charm bracelet I wore on the trip, with initials of each of my sons, given to me by my best friend

As the fates would have it, I got a trial run at leaving town, and it was a good thing! I’m not kidding when I say I spent five days packing and planning. I got advice from my pediatrician on how to say goodbye to our 2-year-old, Wade. (For the record, she said to make it direct, short and positive – no drama.) I managed to hold back the tears until I had turned off our street. Two more turns and I was better; time to crank up the radio. Problem was I only made it as far as Chipper’s house. I got to Atlanta only to find out the Cooperstown leg had been cancelled because a Nor’easter was coming with 20 inches of snow. The good news was the trip was rescheduled for April, and I got a great night’s sleep before driving back to Charlotte the next day.

My second shot at it, I didn’t cry, unless you count a few tears hidden behind a smile as I kissed our babies, Johnny and Wes, before heading out the door. I’d said a quick and breezy goodbye to Wade before Gus, my husband, took him to Storytime at the library, following our usual routine. Planning had been so much simpler this time. I wasn’t breastfeeding anymore, so I didn’t have to pack all the gear and figure out when and where the heck I would pump. We had sleep-trained the babies, which meant I didn’t have to worry about leaving others to sooth Johnny, who used to be really hard to get down. All I had to do was edit my “manifesto,” as Gus called it, outlining the schedule for my three days away, and I was off.

In my former life, I would have spent my packing time stressing about what I would write when I got to Cooperstown. This time I was too busy trying. Granted, travel was so much easier, thanks to Chipper, and it meant I could get a head start on my reporting because I could interview Chipper on the flight. That meant I could relax and enjoy my first night in the snowy little town and some rare time on my own! The old me might have fretted about going out to dinner alone – Chipper and his wife had other plans – but the new me couldn’t wait to get out the door. After checking in to the bed and breakfast where we were staying and facetiming with my boys – I just happened to catch bedtime stories – I was out the door. I was so excited for my little party for one at a quaint Italian restaurant I knew in town that I savored every sip of wine and spoonful of crab bisque. Chipper’s agent texted me as the salad arrived, asking to join me. All the better. 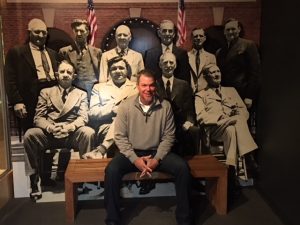 The museum tour the next morning was all it was supposed to be. I loved watching Chipper try to come to grips with his piece of baseball “immortality.” I think it started to hit him when the curator asked him to take a seat in front of a life-sized photo of Babe Ruth and the rest of the first Hall of Fame class. He got a little choked up. The tour included a trip down to the basement of the museum, where Chipper got to hold one of the Babe Ruth’s bats and other artifacts. It ended in the Hall of Fame gallery where he was asked to autograph the marker where his plaque would hang come July. 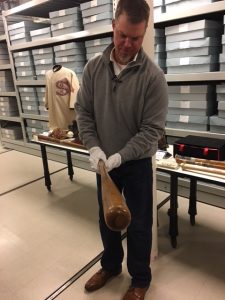 It took me six hours that afternoon to write what used to take me two; talk about being out of deadline-writing shape! But it was nice to get lost in the task. And I could still look up at the clock from time to time and have a good idea of what my boys were doing. Sometimes it pays off to be a Type-A mom!

The trip home the next day, thanks to Chipper, was a breeze. We landed in Atlanta so early I knew I would make it home for dinner and bedtime. I was going to meet the boys up the street at my sister’s house. Two of our nieces were visiting, and she was going to order Smashburger. 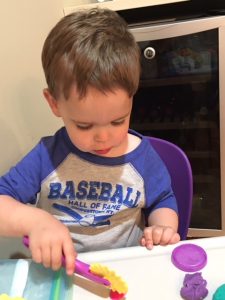 Wade playing playdoh, completely unfazed by my return, though he did seem to like the t-shirt I brought him 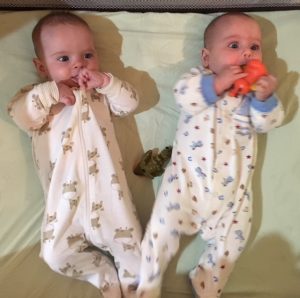 The twins, Johnny and Wes, equally unfazed by my return

Driving up I-85, I had visions of Wade running in slow motion into my outstretched arms, like he had in March. Not so much, this time! He was so busy playing with his cousins he hardly looked up from his sidewalk chalk. Soon thereafter he threw the biggest tantrum I’ve ever seen him throw after I told him he couldn’t play ball out back by my sister’s new swimming pool. (Mama’s not ready to deal with the pool just yet.)

I didn’t have time to wallow in my dud of a homecoming because I was too busy trying to figure out what to do with the crying 2-year-old in my arms. Then it came to me. I started to sing “Could I have This Dance,” the Anne Murray song I used to sing to Wade every night, before bedtime included two brothers. And for the first time in what seemed like 15 minutes, Wade quieted down. Disoriented after three days away? Maybe I’ve still got it!

Wade finally breaks down and gives mama a big hug

I’d missed Johnny cutting his first tooth. My mom was sitting next to me on the couch at my sister’s house letting him gnaw on her finger when she noticed a bottom tooth breaking through. I started to get a pang of guilt, but then I remembered Mom was the one who noticed Wade’s first tooth too, and I’d been there the whole time for that one. A few days away wasn’t going to break anybody. And it might even make us appreciate each other a little bit more.

On the flight home, Chipper had mentioned he wanted me to come to Atlanta to help him write his induction speech in May. By then, Johnny and Wes might be aware enough to get upset when I leave. It will mean asking for more help from people I lean on a ton anyway.

But if I learned anything from my trip to Cooperstown, it’s that Daddy’s got this and my village is very, very good. For the once-in-a-lifetime stuff, the answer should always be yes.

When Chipper gets inducted in July, I don’t want anybody in our little family to miss it, so we’re packing up the whole crew and making the trek to together. No doubt it’ll be another blog in the making!

For information on the Chipper Jones’ biography “Ballplayer”: https://www.amazon.com/Ballplayer-Chipper-Jones/dp/1101984406

For my Baseball America story about Chipper Jones’ Hall of Fame tour:
https://www.baseballamerica.com/stories/chipper-jones-consumes-cooperstowns-history/

See you there! The Smarty Town Hall on Social Media Parenting 3.0 – Register Here