As a parent with four children ranging in age from 4 to 11, I deal with car seats daily. I make my kids buckle up every time, even in parking lots at carpool.   I’ll be the first to admit, they are a huge hassle not only to install but to buckle properly. Until children are old enough for boosters, they make carpooling very difficult.

I just want to take a minute and give everyone a quick refresher on car seat laws of NC and current recommendations for child safety seat from the American Academy of Pediatrics (AAP) because they can be confusing.

The basic law in NC is that children must be in a car seat or booster seat until they are 8 years old OR 80 pounds, whichever comes first. It must be noted that that is the minimum standard and not necessarily the safest option. Additionally, children under 5 or less than 40 pounds must be in the rear seat, unless there is no rear seat. Please note that it is not only unsafe but ILLEGAL for a child to ride with the shoulder belt under their arm or behind their back.

However the American Academy of Pediatrics (AAP) revised its car seat guidelines in 2011, so some parents of older children may not be aware of the changes. The general philosophy is that there is a hierarchy to car safety and it is best to keep children in the safest position as long as possible. Basically, while your child doesn’t LEGALLY have to ride in a booster after age 8, it may be much safer for them to continue riding in it until they reach a certain size when the lap and shoulder belt fits them properly. The science behind the recommendations is that it is best to spread the force of any potential crash around the strongest and largest parts of a child’s body that can best absorb the impact. 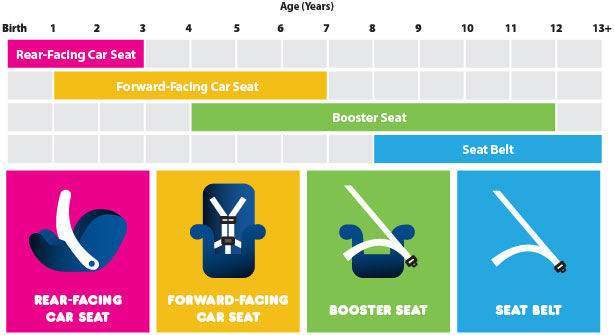 Types of Seats and the current AAP recommendations

1-Rear-facing – Until age 2 or 3 or as long as possible. In the event of a frontal collision, the force of the impact is spread across the child’s ENTIRE back rather than the much smaller area of the seat belt. Additionally, small children have relatively large heads and small necks, so when facing forward their necks absorb a significant part of the impact. One of the studies I read noted that children are significantly safer in side impact collisions when in a rear-facing seat.

3-High back belt positioning booster – When they are too big for the five-point harness, they may still be too short for a backless booster. The high back car seat allows adjustment of the shoulder strap so it sits safely across the chest and shoulders NOT on the neck or under the arm. Remember, you want the seat belt to sit across the strongest parts of the body.

4-Backless booster – When the shoulder strap can comfortably sit across the chest and shoulder without the need for the belt positioner AND your child can sit still during car rides. One other consideration is for long trips it might be a good idea to switch back to a high back booster so your child can nap in not only a safer position, but a more comfortable one too. My kids like to sleep with their heads rested on the side wings of their high back seats. Otherwise they sometimes flops over on the window and are no longer properly restrained.

5-No booster – Generally, when they have reached about 4 ft 9in and the pelvis is big enough that the lap belt sits on their thighs and hip bones NOT their stomach. If the lap belt is on the stomach, in the event of a collision, the organs in the stomach and spine will absorb the impact forces and that’s not good.

6-Front seat – The new recommendation is 13 years old, even with the new generation airbags. The simple reason is that in a collision, a younger child will go forward a bit during pre-crash braking and their neck will flex and the force of the airbag will possibly hit them on the top of the head. Not good.

American Academy of Pediatrics iTunes and Android app “Car Seat Check”   has a wealth of information on car seats and the weight and height recommendations. Along with installations videos too.

A note from our Smarty Breast Cancer Warrior,...