My name is Carroll Walton and I have a clutter problem, “memory” clutter in particular. Old letters, cards, photos, artwork, and other keepsakes to remember life’s big and little moments are one of my weaknesses. Having three children has just given me three times more reason to stash them! 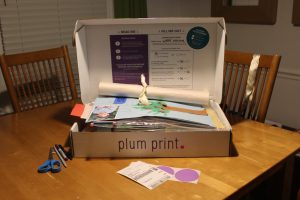 The problem, of course, is where do you put it all? Living in a house with five people and 1970s-style closet space, things that stick around for a long time better have a function. Or at least be small!

For the past four years, I have been stowing away my oldest son’s preschool artwork in a plastic under-the-bed bin. I gave myself a deadline of the start of kindergarten to do something with it. In my former life, I used to scrapbook. In this life – the one where I have a family on top of a writing gig – I needed a miracle. I found it in Plum Print.

I’d heard of national companies where you could ship off a stack of artwork in a box and they would mail it back to you as a scrapbook. I discovered something even better: a local company that does it. Plum Print is based in Asheville, N.C., and they have the southern hospitality in their approach to customer service to prove it. Not only that, but judging by what I recently got back in the mail, their work is as high a quality as any national company you’re going to find. 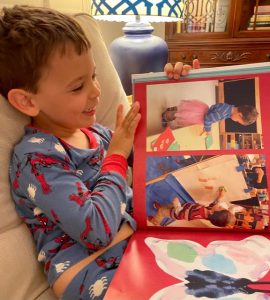 Wade getting a kick out of his “tutu” tendency!

I’m tickled to report that the pile of stuff I shipped off came back a beautiful photo book. It was such a fun surprise to present to my son Wade, who pored over his collection of preschool memories with a simple turn of the page. It was neat to hear him remember some of the details of what went in to what he created and why.

For me, the entire process was embarrassingly easy. Plum Print sent me a box, I filled it with Wade’s artwork, photos and a couple of keepsakes, and in a matter of a few weeks, even during one of their busiest times of year, I had the book back. (Plum Print has a Labor Day sale going on! Get $25 off with code: TIDY.)

You can be as involved or as hands-off on the project as you want. Me tending toward the Type-A, I organized the artwork and photos chronologically and gave them a few suggestions on what artwork should be paired with what photos. They sent me proofs to approve, I made maybe two tweaks and that was it!

After the book is complete, you have the option of letting Plum Print toss the contents of the box or mail it back to you. I hovered over that empty box to check for a long time before eventually deciding I better get the box back. I know, I know, that sounds like my clutter issue at work, but it didn’t seem fair to throw everything away without giving Wade and his Daddy the chance to pick out one or two things to save, then chucking the rest. I’m glad I did because Wade wanted to keep some corn artwork that we’ve put on our front door at Thanksgiving. 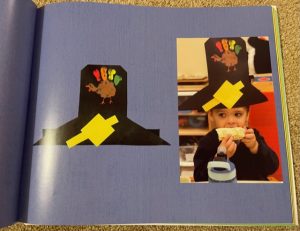 But the overall effect was still in play. I decluttered a ton of artwork (I had thrown some away as I was going through what I wanted in the book) and we got a lovely, tidy, keepsake out of it.

What made this book so beautiful to me, besides the fact that I didn’t have to do it (smile) was its simplicity. Plum Print designers didn’t clutter up pages. The layouts were simple, colorful, well thought out and easy on the eyes. It was obvious the designer paid attention to detail and didn’t rush through it, but she also had the benefit of not being so emotionally attached to every design decision.

As for being emotionally attached, I sent Wade off to kindergarten a couple of weeks ago with a big item checked off the to-do list. Not only was I excited about the finished product but also the comfort of knowing that I was on to something good here. Be prepared, Plum Print! I got two more preschoolers coming….and then grade school, middle school, high school and college!

From the Smarty Health Corner and Novant Health: COVID and flu season “the perfect storm brewing”