Home Parenting I believe I can fly!
Parenting

I believe I can fly!

All kids watch birds and superheroes and dream of flying one day.  When they are little you give them a cape and let them try to fly with it.  They run around with their arms up, trying to fly, and eventually they realize that they do not possess the ability to fly.  It’s fun and amusing.  Life goes on. 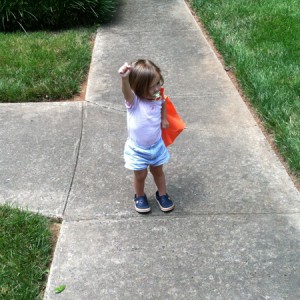 What do you say when your fourth-grade child tells you about their dream of flying? No, not in a plane but by building wings and flying!

That’s crazy!  What is she thinking? I should stop her before it gets out of hand and my wife will not be happy if she gets hurt! How am I going to handle this one?

Day One (planting seeds of doubt)

“So you want to build flying wings?”

“Yes, they will be stored in a backpack and I’ll press a button, they will pop out, I’ll flap my arms and starting flying.”

“Are you worried you might get hurt if it doesn’t work or breaks in flight?”

“No I’ll be safe and wear my bike helmet along with my elbow and knee pads.”

“Ok, good thinking, but I’m not sure they will do much good if you are twenty to thirty feet off the ground?”

“Look at those power lines over the road.  You probably need to be able to fly at least forty feet in the air to be sure and clear them.  Seems pretty dangerous.  What do you think?”

“Good point, I think I’ll just fly over the trees instead.  Besides, they will help break my fall in case something happens.  We can just call the fire department to help get me out of the tree.  Like they do with cats.  Also, if I flew over the road and something happened when I landed in the street a car might hit me, so the tree route will be safer.”

“Excellent point, I agree over the trees is the better way to go.  Maybe you should think about goggles too?”

She can’t be dissuaded!  She has her heart set on it.  What next?

At this point I think about pulling out the “I’m the parent” card and putting the kibosh on the plans and saying it is a bad idea, nobody has ever gotten it to work (not even the genius Leonardo DaVinci did) and we’re done with it.  Anybody that knows me will tell you I am VERY liberal in dishing out ‘No’ for an answer to most questions.  But that’s not my style when it comes to matters of creative problem solving or designing and building stuff.  I’m trying to raise ambitious problem solvers and optimists here, so squashing their dreams isn’t going to get it done.

I step back for a minute.  How did we get to this point?

My daughter read the “Monday with a Mad Genius” about Leonardo DaVinci when she was five. In the book the main characters, Jack and Annie, learn that one of Leonardo’s lifetime goals was to make a flying machine based on bird wings, but he was never successful in creating it.  My daughter has been studying DaVinci’s art and inventions for the last five years and wants to achieve Leonardo’s dream and prove that human powered flight with bird wings IS possible.

We went to the see the exhibit a couple of weeks ago with a few of the other Smarty bloggers and my daughter LOVED it.  She read all the materials, watched the movies and reaffirmed her dedication to being an inventor

3- A school assignment to give a presentation on the word “Prototype” to her fourth grade class.

She only needed to give a short presentation on the word, but saw an opportunity to do more.  She wanted to design and build “backpack wings” that would allow her (and her friends) to fly to school without having to use gas or sit in traffic.  This was the catalyst for the conversations above and the actual building of prototype flying wings.

In addition to the presentation, she wants to build the wings AND bring them to school to do a demonstration for her classmates?!  Her optimism is boundless!  I just hope they are nice to her and she doesn’t get mocked.

Since I can’t talk her out of it, I pull out a parenting technique that I have adapted from spending many nights during college breaks watching the free improv shows at the famous Second City Comedy Group in Chicago – the “Yes and…”  principle.  Time to turn the “Yes and…” into overdrive.

Yes, you can build them AND I will make sure you learn something from the experience AND be as safe as possible.  Let’s have at it!

“If you’re going to build ‘backpack wings,’ you need to do some research so you can build some that might have a remote chance of flying.  I’d start with rereading the Magic Tree House Fact Tracker on Leonardo DaVinci to see if you can learn from his failures and not make the same mistakes he did.”

“Why did DaVinci think his flying invention didn’t work?”

“Will you be crushed if it doesn’t work?” (Managing expectations.)

“Ok, go do your research and come up with a design. One more thing, since hang gliders are already in use, let’s make a ground takeoff part of your design objectives.”  (Safety.)

“Let’s go buy all the materials (PVC pipe, duct tape, and garbage bags) for your wings.” 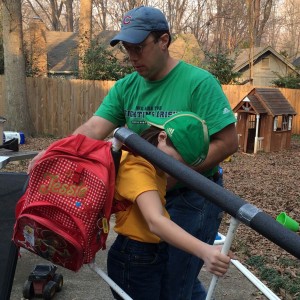 “You finished the frame.  Nice work.  Let’s attach the wings to the backpack and see how well you can flap your wings before we put the plastic on and you takeoff.” (Being supportive in the face of possible imminent defeat.)

“What do you think?”

“It hurts my neck and I can’t really move my arms.”

Reality sets in.  It’s not going to work!  SHE’S CRUSHED!!  Good thing I did my OWN research on human bird wings to help her put the setback in perspective.

Sundown on Day Four – Time to pick her up, dust her off and get her back in the game!

“Are you all right?”

“I know I only had a one in a million chance of it working, but I’m REALLY, REALLY disappointed!”

“I know it stinks and it’s not fun, but ALL inventors face LOTS of failure that’s how they learn.  They are trying to do something no one has ever done before, so of course it’s not easy.  Thomas Edison tried over 10,000 ways to make a light bulb before one worked.  When I was an engineer, I thought I had solved a problem that no one else had solved before me.  My design went MUCH farther in testing that any previous design, but it ultimately failed.  That’s how invention works.  Progress followed by failure.  You have to analyze your failures and learn from them. Ok?”

We improve her design and she is able to flap her wings and put the plastic on.  She is THRILLED!  She doesn’t take flight, but after the soul-crushing defeat on the previous day, she has a huge sense of accomplishment. 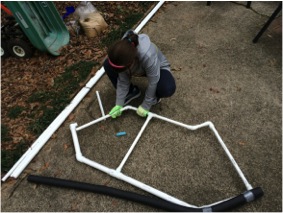 “Yes, you can fail the first time AND bounce back for the next attempt.  Good job.” 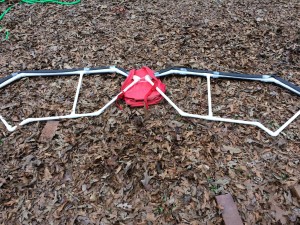 How do you handle your kids’ overly ambitious ideas?  You know the ones out of left field that have seemingly little chance of success.

Here are some cool links about “ornithopters”

3- http://www.popularmechanics.com/technology/aviation/diy-flying/why-its-so-hard-to-build-a-human-powered-winged-aircraft-7539894 (Analysis of the above video hoax and general discussion)

Reichert agrees that something like Smeets’ contraption could be feasible. “Someone could do this,” he says. “But the challenge is so huge. This is not something you could pull off working in your backyard for a couple of months.”   (or five days) 🙂 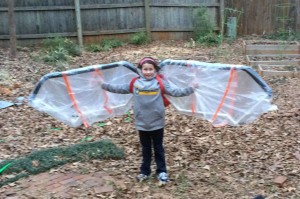 In Defense of Parenthood

This is beyond impressive. Beyond. I laughed. I nearly cried. The suspense was killing me. Can you come over and help us with our time machine?

I’m so proud of my engineers this week for sticking with it!

I will take any one of your kids for a day if Zack will be this patient with Reece and his “crafty” ideas. Serious offer here… I know some attorneys who could write it up.

You are the reason why your kids are so gifted:-) So cool to read.