“Back to School” is a breath of fresh air

You remember when you were a kid and used to roll your eyes at “back to school” mania? When all the stores started putting out backpacks and pencil boxes, you felt a sense of dread that a) summer was all but over and b) you hadn’t finished your summer reading?

It’s hard to imagine feeling like that in 2020. Being a mom certainly changes things, almost as much as a pandemic! Never before have I felt so ecstatic to see lunch boxes lining shelves and to be inside a Target store to see them. These are unprecedented times.

For all those reasons and more, I was downright giddy to drop off my three sons, 4, 2, and 2, for their first morning of preschool at First Presbyterian Weekday School last week. I’m not sure who I was prouder of: my boys, for walking right into the building (masked up, temps checked) without so much as a tear or a turn of the head, or the school, for having the courage to open and give our children a happy place to come back to, logging countless hours to make it happen.

I am so grateful.

It’s been almost six months since I picked up my son Wade from his last day of school before the shutdown. It was right before St. Patrick’s Day. He’d been the “line leader” for his 3-year-olds class that day. We have video his teacher took of him leading his green-clad classmates down the hall and into their room to find a “mess” left by a mythical leprechaun. They discovered a trail of green footprints, gold coins scattered throughout the classroom, overturned chairs, and even green glitter in the potties. OMG!

The clip is five minutes and 48 seconds of pure gold. The kids are practically spinning in circles. Their two teachers are hamming it up, having as much fun as the 3-year-olds. Wade’s lead teacher, the magical Mrs. Paine, references each child by name as she reads a note the leprechaun has left behind for them.

Her trusty sidekick, Mrs. Higgins, captures all of the shenanigans from her iPhone, zooming in for the grand finale on the center of the “Circle Time” rug. Kids gather around Paine for the big reveal: a box of cookies the leprechaun has left, green for the boys and pink for the girls.

During the quarantine, my boys must have asked to watch “the leprechaun video” a dozen times. Just a glimpse of a classroom adventure was enough to perk them up during another day at home with Mom.

School – and being around teachers and friends – does wonders for my boys. It just does. And getting a break, both for parents and kids alike, is just as important, in my book. I’m a more patient parent when I get a chance to re-set. And I forgot how giddy you feel right after you’ve dropped off your kids, knowing they are in great hands, and you think, “My gosh, what should I do first?” 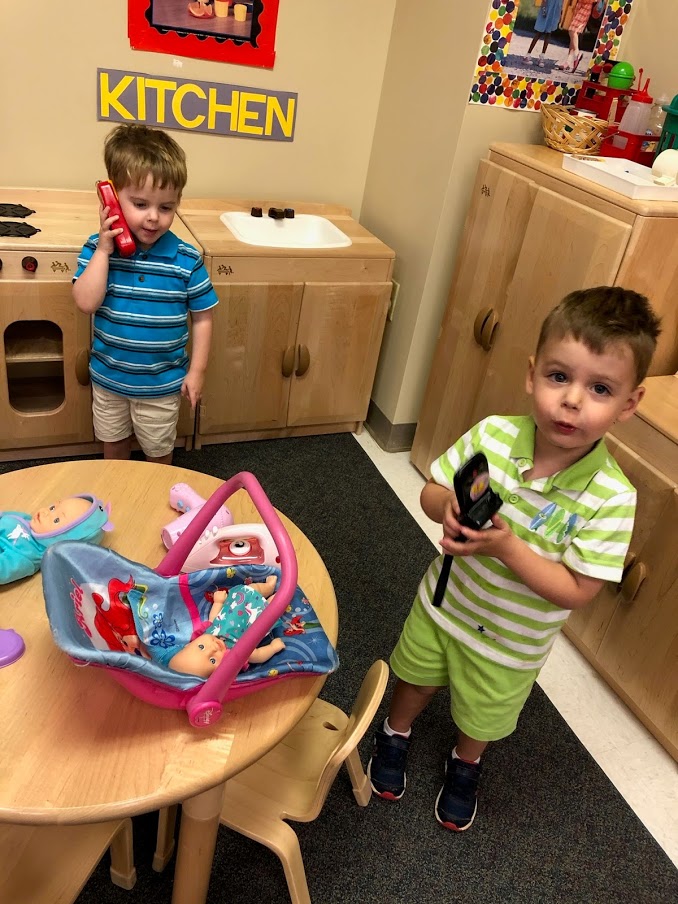 My boys need breaks from each other too, mainly my 4-year-old from the 2-year-olds. They’ve spent the better part of six months within the same 20-foot orbit. Just 3 ½ hours apart last Monday morning gave them cause to smile and cheerfully reunite in the middle row of my minivan in afternoon carpool.

It was hard to decipher exactly what all had transpired on their first day at school because they all talked at once on the ride home. I quickly gave up on trying to get them to take turns and just smiled into the rearview mirror. I wanted to soak in as much as I could.

I got a steady stream of photos and texts throughout the day from their teachers, former teachers and the school director, helping me see for myself what the boys had experienced that morning. They’d explored their new classrooms, tried out new toys, painted on easels, read new books. I pieced together a little more from clues they brought home, like three empty lunch boxes, a trace of red paint on Wesley’s sleeve and a family drawing Wade brought home in his school bag.

Johnny, my other 2-year-old, said he’d shown his new teacher, Mrs. Nelson, the “Paw Patrol” Band-Aid on his knee. Wade had ridden tricycles with a friend from his class last year. Wes could fill in some blanks for me, telling me what song he and Johnny had been singing with their classmates in a photo Mrs. Nelson sent.

“Wheels on the Bus” he said. 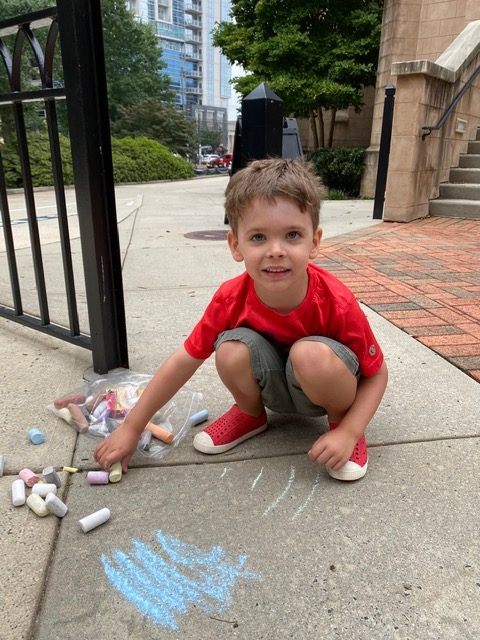 That afternoon, all three boys napped simultaneously for the first time in ages. (Heaven!) That left me a little peace and quiet to replay images from the morning over in my head.

Any Covid-19 concerns I might have had were all but lost in the excitement of our return to a routine. Getting back into the school groove made not only our morning, but it put our whole family in such a great frame of mind for the entire day.

I’m acutely aware of how lucky I am compared to some of my mom friends who are struggling with the challenges of virtual learning. I can’t imagine camping young children in front of a computer for hours at a time. Wade is a year away from kindergarten or we might be doing the same thing.

Our preschool is finding its own ways to try to make things safe. Wade gets the choice each morning whether to greet his teacher, Mrs. Ulrich, with a salute or an elbow bump. His class is divided into the Twizzlers (or “Twizzawers” as he calls them) and the Kit Kats, groupings they’ll use all year to try to keep numbers limited in various activities. He gets to eat a picnic lunch every other day and play outside more than twice as much as he did in years past.

Even in the midst of a pandemic, our teachers are doing what they’re so good at anyway – making learning fun, so much so it’s like you don’t even realize you’re doing it. Only now, after all that’s happened, we mamas realize our kids are doing it. And it’s all the more reason to feel grateful. 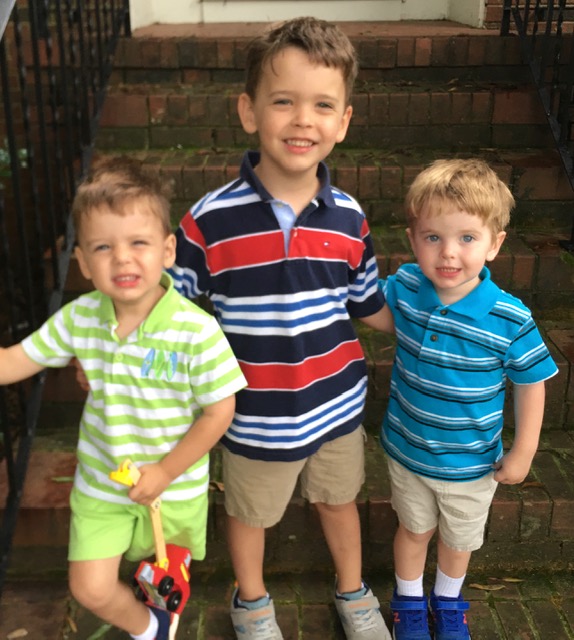 From the Smarty Health Corner & Novant Health: Why heavy Zoom and screen time is hazardous to your health

From the Smarty Health Corner and Child & Family Development: Helping Your Child Process and Cope with COVID-19

How packing it up has helped me see...

Carroll great job as usual. We are so grateful for you.