Feeling a little stuck in the Storytime rut? Tired of sun-blocking everybody up to go to the pool? Family vacations mostly over with? I know I, for one, could use a fresh idea for what to do with young kiddos in the last month before pre-school starts. I got one from a mom I met last week at the CMOMs consignment sale: How about the NASCAR Hall of Fame for a change of pace?

Kristen Jorgensen, of South Charlotte, told me she’d been taking her two young kids to the uptown museum on a family pass for a year and loving it. And no, based on what she told, it doesn’t take a huge NASCAR fan to enjoy it, just a mom looking for a cool, safe place to find some summer fun.
Kristen started going five weeks after her daughter Emma, now 15 months, was born. She needed a place where she could take out-of-town visitors, walk a new baby without a lot of poking and prodding fingers, and also entertain (and entrap, let’s admit, ha ha) her 4-year-old son without disrupting people. The NASCAR Hall of Fame proved a great solution. 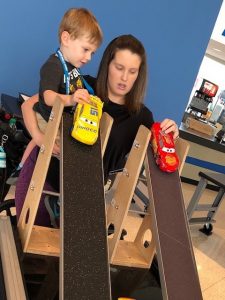 Kristen and her son Troy testing out the toy cars

When she was poking around the internet looking for things to do in Charlotte, Kristen discovered that the Hall of Fame was featuring an exhibit at the time about the movie “Cars 3.”

“My son fell in love with the connection of the movie Cars to NASCAR,” said Jorgensen, explaining how characters like Ryan “Inside” Laney based on Ryan Blaney. “I could walk the baby in a circle and keep her asleep and my son and I could play. And it was easy.”

Some of the things Kristen loved: it’s easy to park, get in and out, and the museum is spacious and stroller friendly. The $185 family pass paid for itself within a couple of visits and made it worthwhile to go for an hour or two, eat lunch there and get home in time for afternoon naps. And it’s not as crowded as places like Discovery Place. (I know, ironic, right? But sometimes you just want a little space in your kid-friendly environment.) 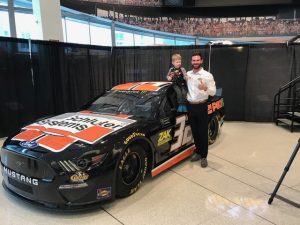 Admission to the NASCAR Hall of Fame for adults is $25. Kids ages 4-18 are $18 and kids under 4 get in free. For more information on pricing and family memberships go to www.nascarhall.com.

Some of the things her son Troy loved: interactive games and demonstrations like the pit stop challenge where you can “pump gas” and practice changing a tire. The kids’ area with little cars kiddos can push down ramps and screens they can touch to simulate painting a car. Kids can click on displays to learn about various car parts. They can walk up museum ramps that are shaped and banked like various NASCAR racetracks. They can walk right onto a real NASCAR hauler and see where drivers store various car parts and the kitchen where they eat while visiting tracks around the country. 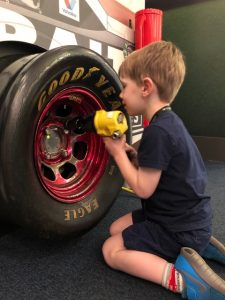 For $5 extra, Troy can sit on his mom’s lap and steer during a driving experience, which takes you on a virtual ride around a NASCAR track – which track depends on where NASCAR is being run at the time. There’s a gift shop with matchbox cars Troy collects at every visit. And there’s a theatre for kids – and mothers, like some Kristen knows who have used the privacy to nurse babies. 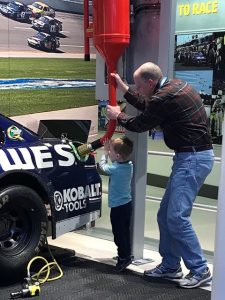 Troy and his grandfather doing the Pit Crew Challenge

The Jorgensens were going to the NASCAR Hall of Fame twice a week when Emma was firstborn. They visited so often they would stumble upon live press events going on there, with drivers introducing new cars or sponsors. Troy got to have his picture taken with NASCAR driver Corey LaJoie.

Needless to say, Troy is a diehard NASCAR fan these days. His favorite driver is Kyle Busch – largely, his mom says, because Busch drives the M & M car. (Hey, hard to blame him there, right?) Now Troy wants to go to his first NASCAR race. Mama and Daddy aren’t quite ready for that one yet, but Kristen loves that he’s fallen for the sport. She grew up around NASCAR because her father worked in marketing for Valvoline motor oil.

Now she has a new reason to appreciate NASCAR – it’s helped her hit her stride as a mother of two. 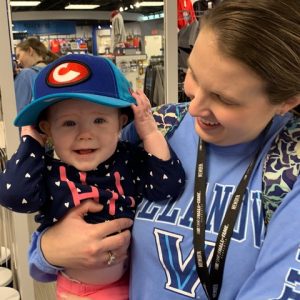 “You’re taking the training wheels off when everyone leaves after having a new baby,” she said. “It’s like, ‘Oh my god, can I do this?’ (Going to the NASCAR Hall of Fame) really gave me that ‘I got this.’ I can go and do something fun for Troy. Emma is fine. She’s sound asleep. I can get all of us fed and back home in time for nap and I did it! It really helped me sanity-wise doing something to keep it normal for him. With him going through all the transitions of becoming a new brother, it still made him feel special and that was really important to me…

“It’s nice too that I have someplace that I can go and I feel safe and I feel like my kids are safe. If I needed something, I have no problem asking any of the people there. They’ve all been so helpful and so supportive.”

Smarty Momcast: An interview with Angel Rutledge of SignUpGenius

From our Smarty friends at Camp Highlander: Grown...

The Power of Failure – a perspective from...

Ever Wonder When It’s the Best Time?