Just a few weeks before we took our family on a summer beach trip, I saw a toddler wearing a sun hat on our neighborhood playground.
I marveled that not only could this mom get her daughter into a hat, but the little girl apparently loved it, and this was without a pool in sight, no beach, no promise of a chocolate treat needed to convince her to wear it.

My three sons have never been big on hats, not even when they were infants and it was cold, or when I tried to talk them into wearing a baseball cap like their father, or asked them to smile for a photo wearing a Steak ‘n Shake paper hat.

But with our twin toddlers’ first beach trip on the horizon, I knew sun hats like this were going to be my best defense, especially for my fairest son Johnny. His skin is downright porcelain. 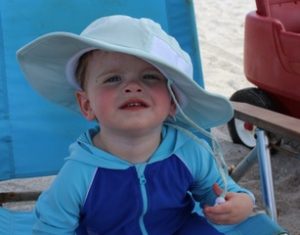 Johnny taking his brother Wade’s hat out for a spin!

This neighborhood friend and supermom told me about SwimZip sun hats. They were lightweight, she explained, easy to clean, had great UVF protection and her kids wore them everywhere: backyard, playground, pool, etc. That was all I needed to hear, especially living in a city like Charlotte where playing in the sun is something we do practically year-round.

I looked up SwimZip swimwear online that night and read about how it was created by a mother who was diagnosed with skin cancer at age 26. That got my attention. I had some melanoma removed from my arm in 2012 and have been hypervigilant with checks ever since. I want to do all I can to protect myself and my three kiddos from skin cancer, and let’s be honest, sun-blocking three young kids every time out the door is exhausting, and just not always going to happen.

I ordered three sun hats, two in aqua for the twins and one in mint green for my 3-year-old. Then I crossed my fingers the boys would wear them.

My 3-year-old son Wade wore his some on the backyard swing and at the pool before we left for the beach, but neither of the twins, who are 21 months, showed much interest. I figured when we got to the beach, I would put my foot down, and thankfully I got an assist from my 16-year-old nephew. 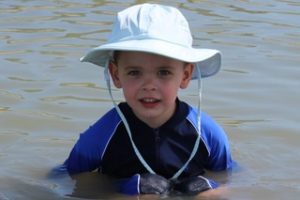 Wade took right to wearing his sun hat. So much fun in the tidal pool!

To my sons, their cousin Drake is the coolest thing ever, and to his aunt, he’s pretty awesome too. He wore a sun hat of his own our first day there to help encourage my boys to wear them too and it worked – mostly. 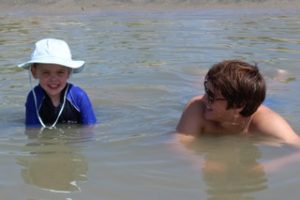 Wade wore his every time we went to the beach with little or no fuss. My twin son Wes played right along too and didn’t seem to mind it at all. My fair son Johnny, who inherited a bit of a temper with that fair skin, has a lot of ideas of his own and didn’t want to wear the hat at all at first.

He would wear the hood from his bathing suit up – and I kept sunblock on him throughout – but it wasn’t until the end of the week that I finally got him in a hat. I think he saw how much a fixture they had been on his brothers and finally realized they weren’t so bad. Win-win.

I still put sunblock on all three boys before going to the beach each time, but I didn’t have to worry so much about how waterproof it actually was and how often I needed to reapply. And I’m proud to say after a week in Isle of Palms, S.C., none of the boys got sunburned, Johnny included.
So consider this blog the electronic equivalent of bumping into us at the playground. Our boys are going to be wearing these hats at the park, at the pool, wherever we need sun protection the most. This mama highly recommends them, and suggests ordering them even midway through the summer. It’ll help you breathe a little easier. It does me, and oh yeah, the hats look adorable too! 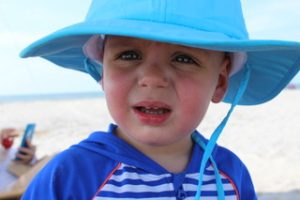 Wesley got sand – but not sun – on his sweet face!

Smarty Tips: How to Stay Sane ahead of...