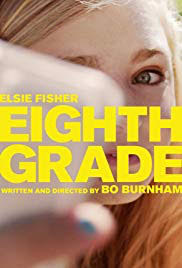 What’s your goal when you head to the movies? Do you want to escape into a thrilling summer blockbuster? Do you want to enjoy a bunch of laughs? Or are you looking for a chance to relive those chaotic and emotional last weeks of middle school? If that’s your answer then I have the perfect film for you. Eighth Grade is the most honest, raw look at middle school that I have seen in quite some time. It may be painful at times to watch, but this story serves more as a public service announcement than an entertaining experience—giving us a glimpse into just how scary and complicated life is for the average teen these days.

Eighth Grade depicts Kayla Day’s (Elsie Fisher) final weeks of middle school before she graduates and heads off to high school. Kayla spends most of her spare time creating motivational speeches on You Tube with topics ranging from how to be yourself or how to be brave and put yourself out there in social situations. Ironically, Kayla is a shy and introverted girl who has yet to figure out how to navigate the treacherous waters of the middle school experience. To her dismay, she is even voted quietest student in her class. Kayla hasn’t made any good friends at school and spends most of her time observing others—especially her crush Aiden (Luke Prael) a handsome yet dim popular guy. Kayla’s main form of socializing is through her phone as she tries to maintain an interesting profile while eagerly following the lives of her classmates online.

Kayla’s well meaning father Mark (Josh Hamilton) tries to engage in his daughter’s life but Kayla is so wrapped up in trying to fit in that she regularly shuts him out. Raising Kayla alone since her mother left them, Mark’s efforts are endearing but often only end up angering his daughter. When popular girl Kennedy’s mother invites Kayla to her daughter’s birthday party, it’s Mark who insists she attend—even though Kayla knows that Kennedy doesn’t really want her there. Mark just doesn’t understand how terrifying social situations can be for a shy girl in an unwelcome environment. Kayla’s resulting panic attack is heartbreaking and devastating to watch.

It’s amazing that writer/director Bo Burnham has been able to create such an unflinchingly real and honest portrayal of life for an eighth grade girl. Burnham perfectly captures just how deeply consumed teens become by their constantly changing emotions. Elsie Fisher is mesmerizing as the confused and awkward Kayla and she makes you cringe through each and every embarrassing and painful situation she endures. Middle school was challenging enough back in the day, but with the addition of social media, the pressure is just so much worse. Every second of downtime is consumed with creating and maintaining a flawless online persona that bares little to no resemblance to reality.

This film is a great opportunity for parents to begin a dialogue about the many pitfalls teens face as they grow up. So why is it rated R? (Spoiler alerts ahead but it’s worth knowing what you are getting into if you decide to watch this with your teen!) I was actually surprised at the rating as the language is not horrible (a few F words and mild swearing) and there is hardly any violence (there is a school shooting drill where students pretend to be shot). While there is no nudity, Kayla does try to get her crush Aiden’s attention by pretending to have inappropriate pictures of herself on her phone. He then asks her if she knows how to perform oral sex which compels her to research the topic online. There is also a scene where Kayla finds herself alone with high schooler who plays truth or dare with her to try to get her naked. Luckily, a mortified Kayla is smart and strong enough to talk her way out of the rather scary situation but the ordeal is uncomfortable and difficult to watch.

Whether you have a current middle schooler or you will have one in the future, this challenging film will give you valuable insight into the mind of a teenager. While you might not fully enjoy the emotional experience, you definitely won’t regret seeing this incredibly poignant and ultimately uplifting film.

From the Smarty Education Corner and The Fletcher School: Clearing Up the Confusion Around Dyslexia

‘Music Together’ takes on new meaning for our crew