I had a pretty good idea my 4-year-old had a blast at the Spooky Seas exhibit at the SEA LIFE Charlotte-Concord Aquarium, but I got confirmation in the carpool line.

We were picking up my two other sons – Wade’s 3-year-old twin brothers – from preschool on our way home from the aquarium. Johnny and Wes were barely buckled in before Wade started boasting about our morning outing. (He and I got some 1-on-1 time visiting SEA LIFE on a Friday, the one day a week he’s out of pre-school while his brothers are in it.) 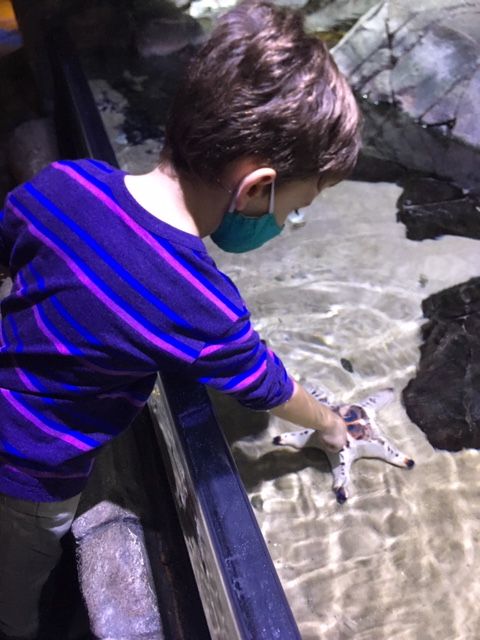 “Did the starfish wiggle?” Johnny said.

“No,” Wade said, with some older brother “as if” mixed in. Then he went on.

Wade then repeated what he’d said to me on our way out of the aquarium: “Let’s talk about what we learned about fish.”

I let Wade do most of the talking, of course, curious to see what he would come up with. He gave a running commentary about the size of the sting rays we saw, the scope of the giant sea turtle named Neptune and the variety of sharks. By the time he slowed down, Johnny and Wes were asking if we could go back to the aquarium after quiet time. 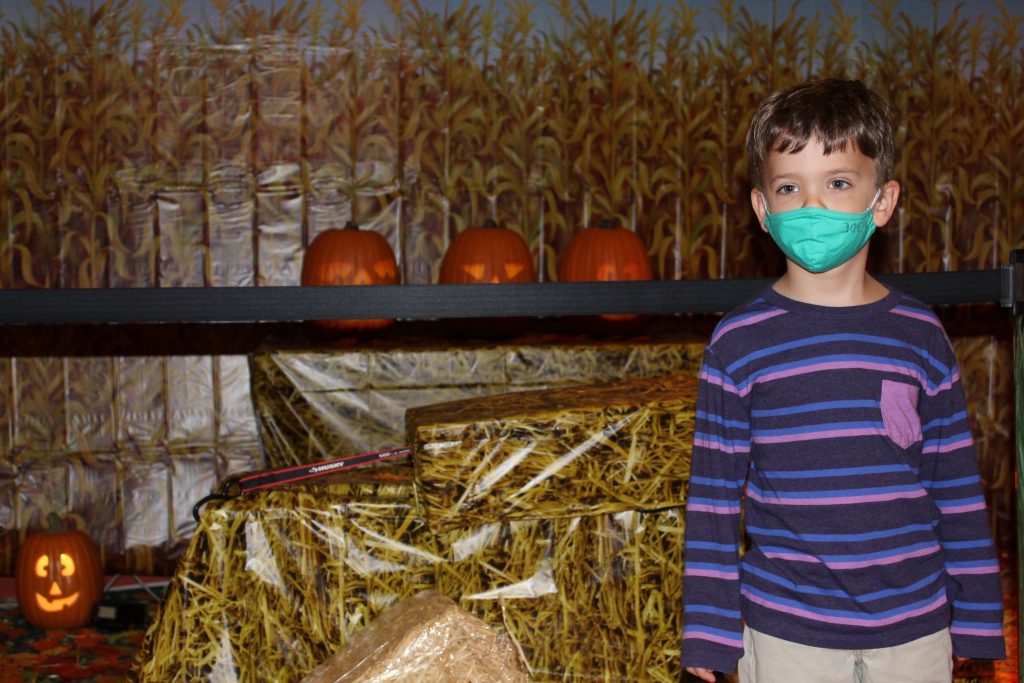 Twice in a day might have been a bit much, but we still had two weeks left to make it happen. SEA LIFE Charlotte-Concord is running its Halloween-themed exhibits through Oct. 31. Spooky Seas is the family-friendly, Halloween-themed aquarium tour for younger kids early in the day. Scary Seas comes with scares mixed in for the older kids (recommended for ages 13-and-up) in the evening.

In our household, just strolling up the street to see neighbors’ Halloween decorations is quality entertainment. Having an array of sea life on top of the spooky décor? Win-win. Wade was mostly taken with what was going on inside the tanks, as he should have been. It was his first visit to any aquarium. But he also couldn’t help but stop to size up the dancing ghosts projected on a wall at one point and the jumbo-sized spider scaling the wall as we walked through the ocean tunnel.

Wade surprised me when he didn’t want to stop and watch a spooky video of dancing Halloween characters at the end of the exhibit. I had a hunch he was feeling shy about another young girl sitting nearby with her parents. Hunch confirmed later when he told me that night at bedtime, he wished we’d stopped to watch. I figure if that was his biggest regret, we were doing well! 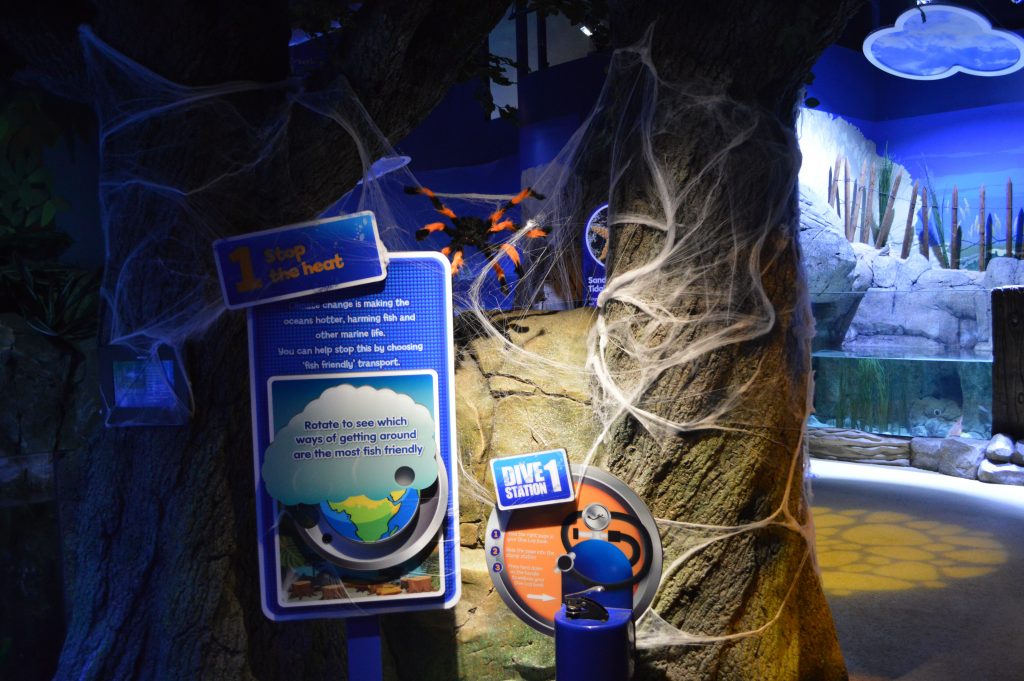 Wade’s impressions are what gave me the biggest kick, but I thought I’d share a couple of thoughts from the parent’s perspective for those curious about visiting the aquarium:

This was my first time at SEA LIFE, and my biggest realization was that you don’t have to rush through the exhibit. Having lived in Atlanta for 17 years and visited the Georgia Aquarium multiple times, I figured I needed to push the pace as we walked through, especially given my own time constraints. I had an hour or so between when SEA LIFE opened at 11 a.m. and when I had to leave to pick up the twins at preschool. In actuality, the scope of this aquarium is much more manageable, and that’s a positive when you have younger children. We had more than enough time to take in what we wanted, and following Wade’s lead, still backtrack and revisit some of what we missed.

Flash photography isn’t allowed, so don’t get your hopes up about snapping the perfect photo. The lighting at the Interactive Touch Pool is good, though, so that’s an easy place to get a good shot or two for the grandparents while your flash is off. Otherwise, this is a good time to focus on being “in the moment.” 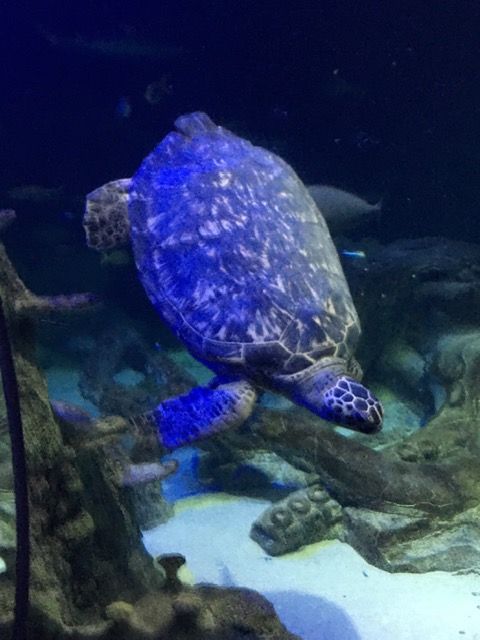 A couple other pointers: if you haven’t been, the aquarium is located right in Concord Mills. It’s both easy to access from the parking lot, and as a bonus, it’s a short walk from the food court. Easy post-tour meal opportunities!

The exhibit is self-guided, so social distancing is largely up to guests, but in our experience people were mindful of giving each other space. Employees, kids ages 5 and older, and adults are all required to wear masks. Wade is 4 but comfortable wearing a mask from preschool, so he did fine wearing his throughout the tour.

Charlotte Smarty Pants is giving away FOUR Tickets to SEA LIFE Charlotte-Concord during their Spooky Seas and Scary Seas exhibits. Total value: $87.80. Tickets are valid through Oct. 31, 2020. Winner will be selected at random on Oct. 23. Entering is easy peezy, simply do the following:

1) You must subscribe to the CSP weekly newsletter. We’ll announce our winners on CSP social on October 23rd, so make sure you are a subscriber! Email is old school but we still LOVE it! 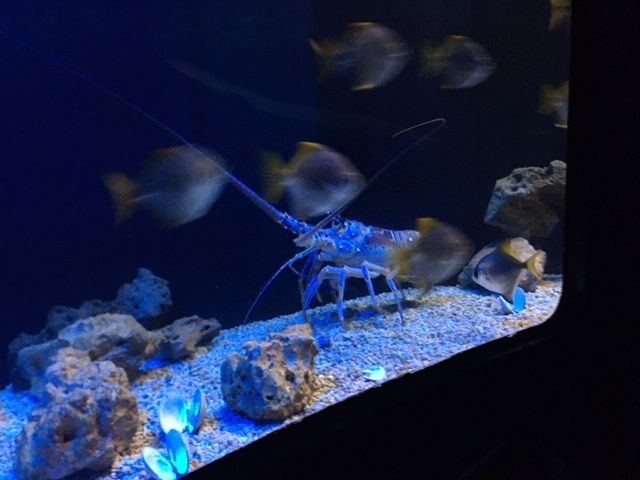 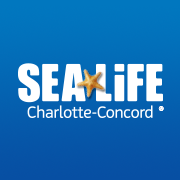 From the Smarty Health Corner + Child and Family Development: Mindful Exercises to Encourage Peace within your Day!

Smarty Scoop on Weekend Activities: May 25-28

Catching on to consignment sales