CSP Team Note: We are so excited to welcome new Smarty blogger Tonya Miller to our team and look forward to reading more from her! 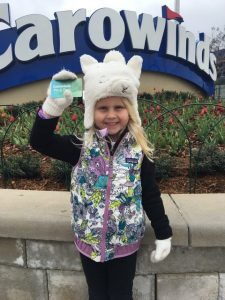 The opening weekend of Carowinds had a high temperature of forty eight degrees. Not exactly spring-like weather, especially in the Carolinas. My first inclination was to put it off and wait for a glorious spring day. My daughter Audrey, 4, however, was beyond excited to go in the cooler weather “I’ll just wear my polar bear hat and gloves,” she said. We arrived just before noon, parked near the entrance, scanned our passes and off we went. 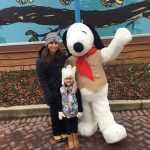 Once inside the park, we headed straight for Camp Snoopy to check out the newest rides. The first thing we noticed was the Carousel had been replaced with a large Snoopy water feature and covered seating area. This will be a welcomed reprieve in the summer months. Audrey went right for PigPen’s Mud Buggies, then onto the Camp Bus, Kite Eating Tree and Peanuts Trailblazers. Each of these rides allow for parents to accompany them, except for the Kite Eating Tree. We didn’t do the Woodstock Whirlybirds which is a tea cup ride, like the Flying Ace Balloon Race, I tend to tag out on those dizzying rides. 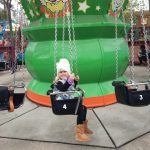 There were no lines, we simply walked up and got on. When we got to the Woodstock express, Audrey wanted to wait for the last seat on the roller coaster. When I asked her why, she says, “because it’s faster.” This is how I know she’s my child. As we rumbled up the first climb on the coaster, we got a full view of Beagle Scout Acres. It’s an 8,000 square foot play area on artificial turf for big and little kids alike. Although it wasn’t needed today, there appears to be a shaded area and lots of seating for adults.

We had lunch at Harmony Hall Marketplace. It’s a large indoor space with wooden picnic tables and has live musical performances during the high season. We split the chicken tenders, french fries and a bottled water. It was less than $20 total. There is a water fountain with a bottle water refill station on the wall near the restrooms and we opted to refill it there. There were no musical performances that day, but a series of music videos played on the big screen. Several were pop songs sung by kids that had Audrey dancing in the isle. 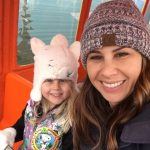 After lunch we rode the carousel which is now located next to the Vortex roller coaster, then we hit up a few games. Audrey’s first win was shooting a tennis ball out of a nerf gun into the open mouth of a painted dog. For that she won, a plush puppy and the obsession began. Making our way back to Camp Snoopy, we stopped at the “Fool the Guesser” game, knowing it could be an easy win. I had the guesser guess my age instead of weight. She wrote down a number and then asked me how old I was. I knew this would now require proof of age and I pulled out my driver’s license to show her I was not anywhere near twenty two. Audrey happily choose a pink and purple raccoon, thrilled mommy didn’t look her age. 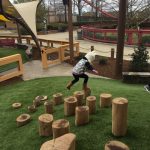 After a few more rides, we called it a day. Audrey was tired of carrying around her new stuffed friends and wanted to head home. This is the beauty of a season pass. It’s a 20-minute drive to Carowinds for us and can be easily done as a half day activity.

My summer usually includes a few playdates to Carolina Harbor. We park directly in front of the waterpark and enter at 9:30am (30 minutes before they open). We pack our lunches in a cooler and leave it in the car. Although we can’t bring food into the park, we can leave the park with a hand stamp and find a spot to eat outside, but we tend to head out about 12pm just as the park gets super hot and packed with people.

Another great summer activity is doing a couples date night with friends. We’ll schedule a babysitter and hit the park around 6pm on a random Monday or Tuesday night when the crowds tend to be less. This is where I challenge everyone with me to ride in the front row of Fury 325 and Intimidator and hold their hands in the air the entire time. After a few hours of playing an adolescent daredevil, we head somewhere closer to home for dinner and tasty cocktails. 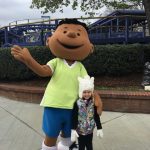 A Carowinds pass is a game changer for any parent. The season isn’t just a summer in the Carolinas, it includes Easter Eggstravaganza, The Great Pumpkin Fest & Winterfest. It makes me wonder when they’ll start calling it an annual pass. The new Pre-K pass is free for children ages 3-5 years. It still requires you to purchase an adult season pass ($130 with taxes and fees). You have until May 28th to sign up for it and June 17th to activate it. The best perk is the 30 minutes early admission throughout the summer to Camp Snoopy and Carolina Harbor. If you time it well, you’re in and out of there by 12pm each visit, beating both the heat and the crowds. Audrey is convinced that Carowinds is a half day adventure and we’d like to keep it that way while we still can.

Camp – Everything is Awesome!