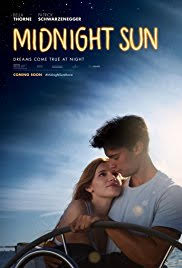 When I saw the preview for Midnight Sun , I knew that this would be a difficult film for me to watch. Not because I’m such a huge fan of teen melodramas, but because this story hits very close to home for me. Several years ago, my dear friend Kristen called from a family vacation. Her youngest son, Brady, had gotten a horrible rash after a day at the pool and she wanted my pediatrician husband’s help in figuring out the cause. None of us could have guessed that this was the start of a long process that would eventually find Brady being diagnosed with Erythropoietic Protoporphyria (EPP). What this means is that if Brady is exposed to sunlight, he develops very painful skin rashes. This extremely rare condition is one of several types of sun sensitivity disorders that as a group are called porphyria.

Midnight Sun tells the story of Katie (Bella Thorne), a beautiful 17 year old who suffers from xeroderma pigmentosum (XP), an extreme photosensitive disorder. Katie has spent all of her days living inside her house watching the world go by through tinted windows. She sleeps during the day and her nights are spent alone singing and playing her guitar. Her one real teen experience over the years is the crush she has developed on Charlie (Patrick Schwarzenegger), a boy who skateboards by her house each day on his way to swim practice. Katie’s only other link to the outside world is her friend Morgan (Quinn Shephard) a delightfully quirky yet completely loyal friend. The school year has ended and Katie has graduated with the help of her adoring father Jack (Rob Riggle) who has homeschooled her all these years. To celebrate, Katie talks her overprotective dad into letting her go to the local train station to sing after the sun sets. As fate would have it, handsome Charlie has just left a graduation party when he walks by the station and hears Katie’s beautiful voice. Even Katie’s incredibly awkward social skills can’t detract from her beauty, so when the skittish gal dashes off without giving Charlie her name, he’s hooked. Just as Cinderella left behind a clue, Katie forgets her journal full of songs. With Morgan’s help, Katie and Charlie reconnect and when he asks her on a date, she tells him she’s busy during the day but free in the evenings.

Clueless Charlie and Katie are soon inseparable once the sun sets. Katie is afraid to share the details of her condition, and Charlie is none the wiser. Life is bliss until one night when a romantic date at the beach lasts too long and Katie’s watch dies (that’s what you get for going for a late night co-ed swim in just your underwear!). Cinderella has stayed too long at the ball and now she has to beat the clock to make it home on time before sunrise. As the pair desperately dash back to reach the safety of Katie’s home, Charlie finally realizes that something’s amiss with his dream girl.

I could discuss at length the inaccuracies of Katie’s medical condition and rapid decline but since it’s a teen drama I’ll try to take it in stride. Bella Thorne, best known for her Disney channel characters and playing popular mean girls, does a solid job playing sad songstress Katie. The real issue is Patrick Schwarzenegger’s rather wooden performance as Charlie. While the son of Arnold Schwarzenegger and Maria Shriver is admittedly gorgeous, he just can’t seem to infuse Charlie with any real vitality or emotion. The pair just doesn’t have great chemistry. The biggest acting surprise is Rob Riggle. Best known for his comedic chops and for playing lovable doofus characters, his portrayal of Jack is incredibly touching. One particularly moving scene where Katie realizes that her father has put his entire life on hold to always be there for her had me scrambling through my purse in search of tissues.

The story of an ill-fated romance between beautiful people should appeal to most teens. I was surprised and dismayed to see partying and teen drinking being portrayed as a completely normal activity without any consequences. But aside from the aforementioned swimming in skivvies and some prolonged make out sessions, there isn’t too much that is inappropriate for teens to see.

If you want to get a real sense of what life is like for a family managing a photosensitive skin condition like Porphyria, check out my interview with Kristen tomorrow as she’ll be featured as our long-distance Smarty Mom!

Getting psyched up to potty train

Necessity is the Mother of Invention