Home Education Something Every Parent Should Do With Their Teenage Driver: B.R.A.K.E.S.
EducationHealthParenting

Something Every Parent Should Do With Their Teenage Driver: B.R.A.K.E.S.

As I’m speeding down the road at 11:30 at night with my very pregnant wife in the seat next to me, the last thing on my mind is driving school for the yet to be born baby in her belly. To be honest, all I could think about was how much a new leather seat is going to cost if she goes into labor riding shotgun in my brand new Audi. I actually considered stopping at a convenience store to buy plastic trash bags to put between her and the seat. This is how an immature 30 year old thinks. My life was about to change in a major way.

Once you have kids, life seems to move much faster. And as a new parent, you realize every day there are new decisions that need to be made – and YOU are the one in charge making the decisions. As the years go by, these decisions get progressively harder and more important as kids get older. We all solve them with a mix of help from grandparents, reading, trial and error, common sense and of course, Google searches. They start out simple and small. Decisions like ‘what kind of jogging stroller should we buy’ and ‘should we visit your parents or mine for Christmas this year.’ But soon enough they turn to really important things like ‘where should we send our kids to school’, and ‘how to we get the kids to eat vegetables and how do you pronounce Quinoa.’ At the end of the day, many of these decisions are about preparing kids for the real world in some way or another so your kids don’t end up living in your basement at age 25 while they ‘find themselves and try and become YouTube stars’.

Fast forward from that night in my Audi 16 years and that baby is now teenager who’s body is changing, he’s started talking about girls AND he’s about to drive a car. Most likely one of my cars. When this hit me, I knew I had to do more than the bare minimum when it came to ensuring Mason was a safe and competent driver. I also was fairly certain that the school’s driving education wasn’t going to cut it for me. Consider this – by the time the average kid turns 16, he or she will have had thousands of hours of instruction/practice in either a sport, hobby or musical instrument. Yet, when it comes to driving, we throw them the keys to a 3,000 lb missle after only 6 hours of training. How crazy is that? It’s no wonder half of new drivers crash before they graduate high school and almost 90% have some kind of accident within 3 years.

In Mason’s freshman orientation at school, a man came and spoke about a driving program for teenagers learning to drive called B.R.A.K.E.S. – which stands for Be Responsible And Keep Everyone Safe. I liked his message and his passion for what he was saying. It turns out this guy was more than just a spokesman for B.R.A.K.E.S. – he was the founder of this non-profit after his teenage son caused a horrific wreck killing both his kids (16 and 12). His name was Doug Herbert and he stood there in front of 500 people and told the story no parent wants to tell (or hear) about how his son caused the wreck and we can all do a better job of making teenagers better drivers. To date, over 20,000 teenagers have taken the B.R.A.K.E.S. course in 18 states. I knew that when it came time to learn to drive, Mason was going to do the B.R.A.K.E.S. program. 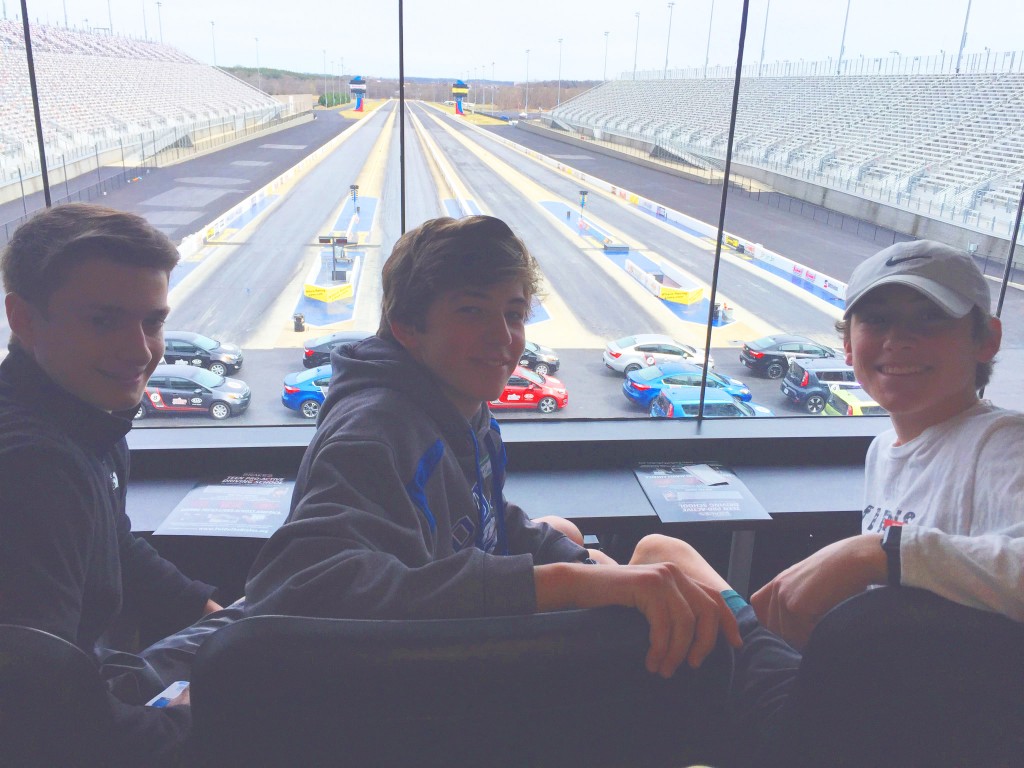 When the time came for drivers-ed, it reminded me of B.R.A.K.E.S. and I found a few other dads who had kids Mason’s age to do the 4 hour course and we were ready to go and make a day of it. The B.R.A.K.E.S. course is held at the Charlotte Motor Speedway (specifically at the ZMax Dragway – about a 20 minute drive north of downtown). The course is free, but requires a $99 deposit to reserve your space and at the end of the course, you can get your check back or donate to the cause. They run the 4 hour course both in the morning and in the afternoon. On the day of the course, we followed the B.R.A.K.E.S. signs and found plenty of smiling faces helping direct us to where we needed to be. As we walked from the parking lot, one of the B.R.A.K.E.S. employees asked the kids to jump in an 18 wheel semi-truck so they could see what a truck driver sees (and doesn’t see). Not exactly rocket science, but I figured every little bit helps.

The program started with a quick classroom-style lecture where a young and energetic speaker gave an overview of how the day would go and what the teenagers could expect. He was full of interesting (and scary) facts that seemed to get the teenagers thinking that driving a car is not a joke and should not be taken lightly. Did you know that accidents caused by teenage drivers (age 15-19) are up 10% over the past few years (I’m guessing from cell phone distraction). And there were more than 45,000 teenage accidents in 2015 with 77 of those fatal.

After about 45 minutes, they separated the 45 teenagers into 3 groups (if you go with friends, don’t expect to be grouped together – which is probably a good thing). Mason was in the blue group, Ryan in the red group and Cole in green group. I could see in their eyes they were tired of all this talking and ready to burn some rubber.

Out on the course, there are 5 different ‘exercises’ and everyone gets to do every station. The teenagers are then further divided and they put either 2 or 3 kids in each car with a professional driver (FYI – you don’t drive your car, KIA donates the 20 cars being driven – yea KIA). It was clear right away, that this was not going to be like the school’s drivers ed. My smile got wider with each passing tire screech. The sound of slamming brakes and revving engines was music to my ears as it was clear they put the kids in bad situations and then taught them how to survive. 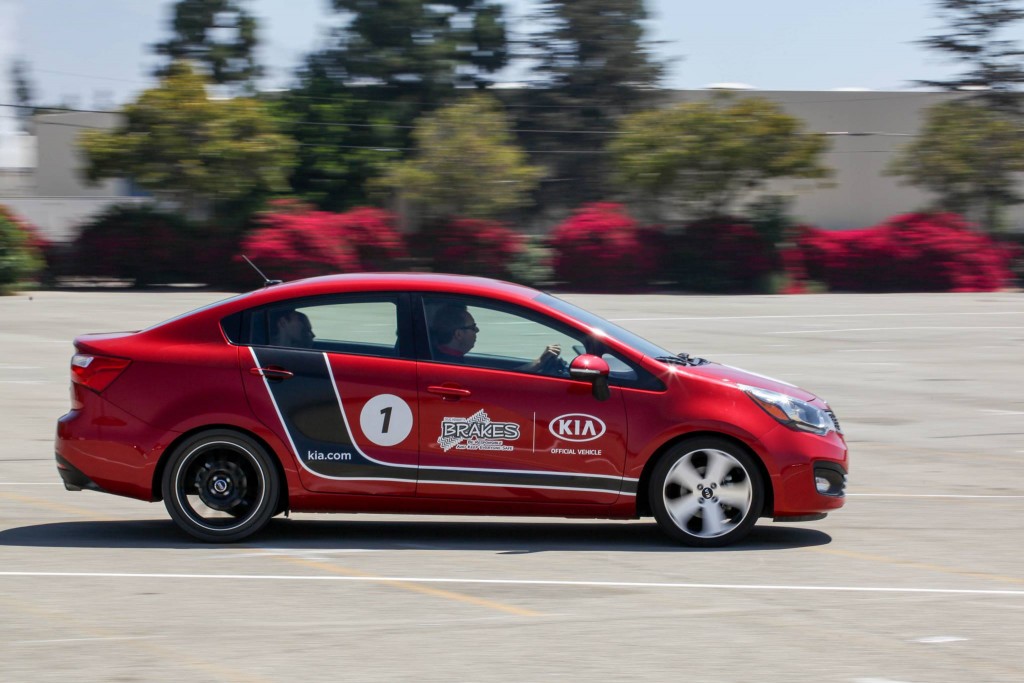 The first exercise was Drop Wheel/Off Road Recovery and their instructor had them drive 2 wheels off the edge of the road on purpose and then taught them how to slowly and carefully bring the car under control and get it back on the road. They did this over and over until all the drivers had several turns. And while this doesn’t seem like a big deal, this kind of situation happens every day and over-reacting in this situation can cause fatal accidents.

The Panic Stop Exercise had the teenagers get the car up to 50 mph and then slam on the brakes while turning the steering wheel and switching lanes. I know what you’re thinking – this sounds dangerous and crazy, but it showed them that a car can (and will) steer while under heavy braking. This was one of the exercises where they also let parents give it a try behind the wheel, and while it was scary at first, it didn’t take long to realize that cars these days have amazing technology. I got a high-five from our instructor Jim which I think means I was the best in our group (sorry Paul). It reinforced something I’ve been telling Mason for years – that speed is what kills in accidents and you need to ‘scrub off’ as much speed as possible in a bad situation to minimize damage, impact, etc.

The next was the Car Control and Skid Recovery Exercise where the KIA’s had special plastic rear tires and the drivers were taught how to control and recover from a tail spin. This exercise simulated wet or icy driving. To give you a visual, think about how you used to slide around in your driveway on a Big Wheel with the big ol’ plastic tires. As you can imagine, the cars were slipping and sliding all over the place, but gradually as time went on, fewer cars were spinning out of control and more drivers were regaining control of the car. It was fun to watch how quickly the kids figured it out. Practice makes perfect.

In the Collision Avoidance/Slalom Exercise, it forced the driver to negotiate a quick, evasive lane change without losing control of the Kia. This one simulates an animal coming on the road or another car swerving into your lane. It’s a split second decision being made at 40 mph and exactly what will help them avoid an accident some day.

But probably the most relevant exercise was the Distraction Exercise. This one forces the driver to negotiate a coned course while the instructor tries to distract them in different ways. This one shows how dangerous cell phones, the radio, text messaging and friends can be in the car and was probably the most eye-opening to the drivers.

After 3 hours of screeching, spinning and swerving, we all headed back to the classroom for a quick recap of the day where the kids picked up their certificate for safe driving so they could feel a sense of accomplishment. It was clear to me that all of the workers and volunteers were incredibly passionate and committed to making teens better drivers – they really do care about our kids. As everything was winding down, I looked around the room at the other 45 parents and it hit me. I realized we all have different jobs, come from different walks of life, and have differing parenting philosophies. But for 4 hours on a Saturday afternoon, we were all exactly the same. We were all just parents pushing through life. Parents who love their kids and decided to pro-actively do something to make their teenager a better driver. As Mason gets older, the hard decisions seem to come faster and faster with each passing day, but the decision to attend B.R.A.K.E.S. was a pretty easy one that I will never ever regret.

For more information on B.R.A.K.E.S:

From the Smarty Education Corner and Charlotte Latin School: The Magic of Routine