Home Things To Do Children’s Theatre of Charlotte’s ‘Junie B. Jones’ Stole the Show! (And psst! There’s a giveaway here!)
Things To Do

Children’s Theatre of Charlotte’s ‘Junie B. Jones’ Stole the Show! (And psst! There’s a giveaway here!) 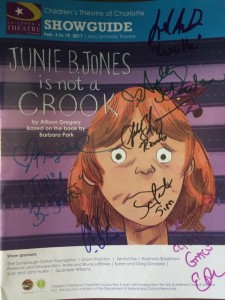 Save the date, Smarties. Junie B. is in town with Children’s Theatre of Charlotte’s latest production and your kiddoes will LOOOOOOOOVE this performance. Yes, the Junie B. Jones series can be controversial with parents. She’s sassy. The grammar/language is not perfect…. Some people interpret her as being rude and disrespectful. It is written in the point of view of a kindergartner. Junie B.’s character celebrates everything about being 6 years old! She doesn’t mean to be disrespectful. She is just an active 6-year old little girl questioning life as it is being thrown at her. So, I beg you, if you are one of those parents that are on the fence about going to see this play – GIVE IT A CHANCE! YOU WILL NOT REGRET IT!! Okay with that said, here is my review… 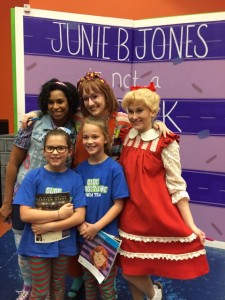 Junie B. Stole the Show. From the minute the play started, the audience was captured. Uncontrollable laughs from every direction. Even the parents were giggling. They did an amazing job presenting a difficult topic and making it fun, relatable and hilarious. The cast was impeccable. You forget that they are adults playing 6-year old children. I would take the boys again. That is how much they liked it!!! As a parent, I loved it. I felt it captured the essence of childhood. It has a playful spirit. It is so much fun!

BRAVO, Children’s Theatre of Charlotte you have once again received the SMARTY SEAL of APPROVAL!!!

Junie B. Jones is Not a Crook
Children’s Theater of Charlotte
February 3 to February 19, 2017
McCall Family Theatre
For more information: www.ctccharlotte.org

Smarty Giveaway: A Family 4 pack of tickets to see Junie B. Jones is Not a Crook 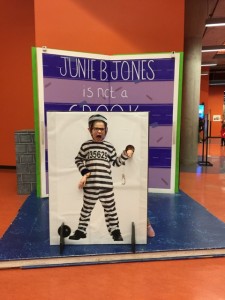 One of my favorite holiday treats: “Happy Holidays”...

Hanging with Wilson to prove that no child...

Smarty Scoop on Weekend Events: May 26-28

Junie B Jones is the best, of course!

Ramona Quimby! (Pretty sure I’m raising a Ramona of my own….)

Nancy Drew- I had the entire hardback series!!

I’m the playwright who adapted this play. Thanks for your delightful review, Jenni. I love Junie B., she’s the bestest.
I enjoy all the other book characters listed here as well. Smart, sassy girls rule!