Home Parenting Dealing with the non-believers
ParentingThings To Do

Dealing with the non-believers

I am going to go out on a limb and saying that our family was pretty fortunate for the run we had.  Far too many families have had to deal with the non-believers way before their time.  I could blame social media or television.  Spying eyes over your shoulder while on Pinterest is a killer for sure.  Stupid adults and their blabby mouths…  But really, it’s the stinkin’ kids.  They are the ones that ruin it for everyone.  Older brothers and sisters, caught up in a rage, blurt out non-believer hypocrisy.  Then the angry younger brother takes it to the playground….it’s used as a weapon.  A shame inducing weapon of words…. No, they don’t move by themselves!  He does NOT come the first day of December from the North Pole.  If he was really real don’t you think he would find a way to escape being trapped behind the sliding door of the pantry???  Sigh.  It’s over.

Sixth grade.  We made it through the sixth grade holiday season with both of the kids.  I hear rumblings every now and then that last year my son didn’t believe…. yeah, right.  I saw your face.  You may have been thinking about it, but you weren’t quite sure.  Not ready just yet.  Boy I love you for that.  Thank you, both of you, for giving your dad and I such pure magic.

I am proud to say that our elves came WAY before the Elf on a Shelf/Pinterest era.  We were all on our own with Silver Spurs who arrived one day with sincere caution and trepidation from a wide-eyed kindergarten girl.  She already knew what he was capable of doing – she had seen it with her own eyes.  A mischief maker.  Brought to our home.  A sly fellow who could get all kinds of pissy when the food diligently left out for him was not up to his liking (it took us a long time to realize that the thin gingersnaps were what he was after).  Silver Spurs never disappointed.  He didn’t come with any crazy rules or guidelines.  Some days he brought small treats like a few Hershey Kisses.  The next day he dumped every single book out of the bookshelf in the playroom (he was bored I guess).   He has camped out on the sofa in front of the TV, done yoga, roasted marshmallows….  And some days he did nothing.  Nothing.  And that was ok, too – patience my dear friends.  Patience.

We “adopted” two additional elves one year from Marshall’s as an experiment to see how Silver Spurs would receive them.  They all played well together, thankfully.  I’m glad we added on because we did “lose” our beloved Silver Spurs to the sliding pantry door a few years back. Looking forward to the kitchen renovation to get him back…. 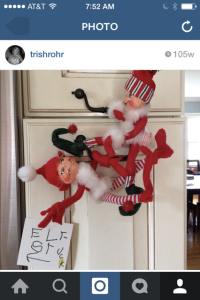 But now….non-believers.  Well, I am having none of that.  And neither are the surviving elves.  We are doing it In honor of our  {temporarily} departed Silver Spurs….

What do you do with two eye-rolling, huffing, whispering, hypocrisy-embracing, critical, quasi-grownup teenagers?  You hit back.  HARD.

I’ve got my stash of tiny candies and gum…..I am already laying the groundwork and luring them into complacency.  They have been warned….

“Start paying attention to us if you want more candy.”
No response.
“We have been holding this container of gum for 24 hours … there will be consequences for your lack of action.”
Nothing.

Do they not know me?  Are they underestimating my ability to get what I want?  Are they too caught up in their snarky non-believing teenage world to play along? Silly, silly teenagers.  THIS is the magic of Christmas.  Not the clothes from Boem or the new Nike basketball shoes….It’s the fun, and the laughter, and the joy.

How to Fit Test Prep into an Already Hectic Schedule

Hunt for the Perfect Nanny in Charlotte –...

Smarty Scoop on Weekend Events: May 6-8