A few of us on the Smarty team were lucky enough to get our very own #BadMomsNightOut last week, which included a DELISH dinner at Buca di Beppo in Pineville and a sneak peek at Bad Moms, which is the newest comedy from the writers of The Hangover and stars Mila Kunis, Kristen Bell, Kathryn Hahn, and Christina Applegate. The entire night was like a blast of cool, fresh air in the middle of a 100-degree Charlotte summer day – unexpected and way overdue – which is the sign of a PERFECT #BadMomsNightOut. 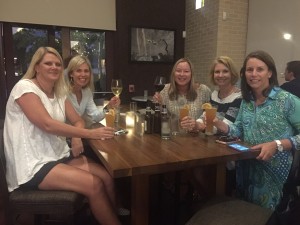 First off, if you liked The Hangover, and you’re a mom over 30, you’re going to flippin’ LOVE Bad Moms. It’s raw, honest, irreverent, and, as one Smarty on the team said, “liberating.” You’ll know one, two, maybe ten people in your life that match up with each character, and you’ll wonder how the writers – a team of DADS – nailed it so well. You’ll want to go with your tribe, that group of girlfriends, however big or small, who are in your same stage, and who can identify with the characters and actually laugh at themselves.

You’ll want to plan dinner beforehand (we suggest Buca di Beppo because a.) it’s yummy; b.) they have fully stocked bar and a great wine list that includes “glass-and-a-half” pours; and c.) there’s a scene in the movie filmed at Buca – get into the part, ladies!) so you can do what tribes of moms seem to do best – discuss, analyze, compare, contrast, and worry about the littles (although in my experience wine helps that). [PS: if you do end up at Buca, get the Chopped Antipasta Salad (still thinking about that dish!), Chicken Limone, and Penne alla Vodka and share it all like the happy mom family that you are!]

After dinner you’ll want to head to the theater and check your “perfect mom” ‘tude at the door – there’s no place for it at #BadMomsNightOut – besides, as the movie suggests, this “perfect mom” image that most of us feel like we have to live up to is doing nothing but wearing us all out AND creating an entire generation of entitled kids. Prepare to cackle while you relate to most of the scenes (obvi many are exaggerated for comedy’s sake but still TOTALLY relatable!). You’ll even feel a tear well up during some scenes (again, those DAD writers NAILED it – pulling on the heart strings of #BadMoms everywhere!).

Don’t let the night end when the movie ends. Gather the tribe for one more round so you can re-hash the movie. Betcha you’ll find a little piece of yourself in each and every character. A betcha your kids will be making their OWN breakfast the next morning (no, not because of your wild #BadMomsNightOut, because…well…you gotta just see the movie to know why :-).)

When the entire mama tribe has seen it, go back for seconds with the hubby…just so he understands EXACTLY why you’re suddenly such an amazingly good #BadMom.

Here’s IMDb’s synopsis of Bad Moms and the trailer – it’s Rated R and opens in theaters nationwide on July 29. Get your tickets here.
When three overworked and under-appreciated moms are pushed beyond their limits, they ditch their conventional responsibilities for a jolt of long overdue freedom, fun, and comedic self-indulgence.

We also want to give a BIG thanks to Buca di Beppo Pineville for hosting the Smarty #BadMomsNightOut! Delish meal and awesome service! Head STRAIGHT there for a pre-movie meal – you can’t go wrong with pasta and cannolis :-).

From the Smarty Camp Corner: Take Flight This...

Why I Will Miss Football Season