Failure. It’s not a word any of us like to say, experience, witness, or anticipate. Perhaps the anticipation of failure is the one we fear the most, so we avoid putting ourselves and our children in its uncomfortable path. We were born to succeed after all. No one ever received a shiny blue ribbon for failing. In fact, failure often left you hiding in the back of the room. Failure produced those stabbing looks from our parents that we then saw in our own reflection. 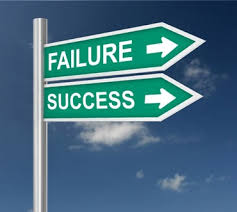 After reading a recent interview with Sara Blakely, the billionaire behind Spanx, the word failure changed it colors. And my fears lessened as I thought about some ideas I have been holding onto for a long time. My fears lessened for my kids, as the word failure lost its stigma. They need to fail. I have needed to fail. I have failed. Failure is most often a prerequisite for success.

Sara’s father used to ask her, “What did you fail at today?” While I may have asked my kids that question on a rare occasion, in a very round about way, I have never asked them that question in such a direct manner or with the frequency that Sara’s dad asked her- which was daily. “How was school?” or “How did your test go?” are the questions that are usually asked with too much routine. I wonder if I even know that I am asking them half the time. And when my kids bring home less than perfect grades, I squirm a little, feeling like I am failing them somehow or that they are not working hard enough. The word failure colors the moment, as we try to decide whose fault it is.

What does failure mean exactly? According to Merriam-Webster, the definition of failure is (1) omission of occurrence or performance (2) lack of success (3) falling short (4) one that has failed. At first consideration, none of that sounds appealing. In fact, it all sounds stressful, unwanted, unprepared, and less than. No one brags about what they failed at or at the fact their child failed at something. Our faces redden, as we avoid the confrontation of the subject. But what does this to to our children? What does this do to ourselves?

Sara Blakely redefined what the word meant during an interview with Anderson Cooper and it resonated with me, so much that I am going to refine the word for my children too. “And instead of failure being the outcome, failure became not trying. And it forced me a young age to want to push myself further out of my comfort zone,” Sara remarked. To put it simply, “If you’re not failing, you’re not growing.” So when Sara’s dad asked about what she had failed at that day and she didn’t have an answer, he saw that as a lack of growth and a lack of trying.

Redefining failure as a positive can be a slippery slope. We certainly don’t want our kids running home with the words “I failed” while holding their hands out for a high-five and tossing their books aside. No, that’s not the expectation we want to set. In order to refine failure into a positive, it has to be intelligent failure; failure that truly came out of wholeheartedly trying. And what is the benefit of being able to throw ourselves into something without the fear of failure? We no longer stare fear in the face and we give ourselves (and our children) the chance to succeed at something they never thought was possible. Failure is only positive when we reflect, not run. As we all know, the best lessons are the hardest lessons. We need to let our kids fail, but be there to help them see the success within the failure. And the same applies for ourselves.

I have failed more times than I have admitted. Some of those failures I am very proud of. I have cried and felt despair while trying to launch a business. And when I failed, I refused to let it stop me in my tracks. I grew from those failures and future failures became less scary. As for other failures, I admittedly have turned the other way without reflection and I never grew. I missed the opportunity. That’s what we all want our kids to have: opportunities (plural). We want them to have choices and successes. Since they have been judged on pass/fails, letter grades, and numeric quantifications since they can remember, it’s not easy to redefine failure on either side of the table. But it is necessary. We have time to experiment with this new mindset before the school year begins. Ask your kids and yourselves what Sara’s dad asked her every single day, “What did you fail at today?”