Home Things To Do Smarty Movies: What have I missed while I’ve been raising my kids?
Things To Do

Smarty Movies: What have I missed while I’ve been raising my kids?

I realize that not everybody loves movies quite as much as I do (ok, few people love movies the way that I do) and I understand how busy life can be. Still, it never ceases to amaze me when people reveal that they rarely hit the theater.  My friend Suzanne admitted that she hardly ever gets to the movies and joked that maybe I should write about all the movies she’s missed in the last ten plus years while she was busy raising her kids.  So I’m happily accepting her challenge. To simplify things, I’ve created four main categories to cover in the weeks ahead—Comedy, Chick Flick/Drama, Suspense/Action/Thriller, and Family Films.

Since my memory gets worse all the time, I went to the fantastic movie site IMDB and only counted the top 250 movies of each year starting with the year my son was born—2003.  So if there’s some fantastic yet obscure movie that I’ve missed, blame IMDB! These picks are purely based on personal preference and are not based on overall critical or commercial success.  This should give you a great starting point to watch some really fun films.  So let’s start with the knee-slappers.

Comedy is tough because there is a real variety—slapstick, physical, subtle, situational, and comedy often comes from bad situations or even tragedy.  I’ve included several types here to tickle your funny bone. 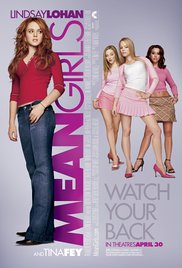 If you have a teenager or will have one in the future, this should be required viewing.  The screenplay was written by Tina Fey in her biting, sharp comedic tone.  Lindsay Lohan (pre-meltdown when she could really act) stars as Cady, a girl who has spent the past 15 years being homeschooled in Africa.  She is completely naive to the dangers of navigating high school and is taken in by the popular group known as the Plastics, led by queen bee Regina George (a brilliant Rachel McAdams).  The jungle would be safer for poor Cady! 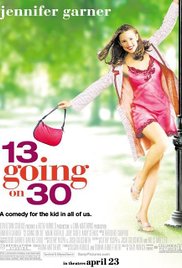 13 Going on 30 (2004, PG-13)
I think of this as the girl version of the classic movie Big.  Jenna Rink, struggling with all of the typical teen pitfalls, is humiliated at her thirteenth birthday party and blames her loyal friend Matty.  She wishes to be an adult and magically winds up as a 30 year old with a great apartment, a hot boyfriend and a terrific job at a magazine (why is that always the dream job?) Jennifer Garner is absolutely adorable as adult Jenna with a teenager’s mind.  She reconnects with adult Matty (Mark Ruffalo) who helps her to find her way in this new and confusing world.  Jenna learns quickly that her seemingly perfect life isn’t all it’s cracked up to be, especially when she learns about all the bridges she had to burn to get there. 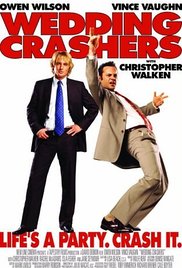 There is something so perfect about the pairing of Owen Wilson’s slow, relaxed delivery with Vince Vaughn’s fast paced ranting.  They are brilliant together as best friends John and Jeremy.  These guys have a shared hobby—the love to crash weddings in order to pick up girls.  They’ve got this down to a science (they even cite rules they follow) until they crash the wedding of Treasury Secretary Cleary’s (Christopher Walken) daughter. Womanizing John meets his match in Claire (Rachel McAdams), the bride’s sister.  Jeremy hooks up with the bride’s other sister Gloria (Isla Fisher) who turns out to to be a “stage 5 clinger” who insists they boys return to the family compound for the weekend.  To spend more time with Claire, John agrees much to Jeremy’s chagrin.  They then spend a hilarious weekend trying to keep up the charade of being invited guests while dealing with the Cleary’s crazy family and Claire’s annoying fiancee (Bradley Cooper in a very out of character but gut-busting role).  This film is not politically correct and it really earns its R rating but you will get an ab workout from laughing! 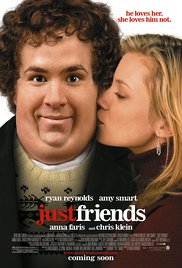 I don’t know what it is about this movie.  It’s certainly not a critical darling by any means and there are plenty of flaws but still, whenever I see it show up on the screen, I have to watch it for a while.  Chris Brander (Ryan Reynolds) is a sweet, lovable, overweight kid in high school.  He also happens to be completely in love with his best friend Jamie Palamino (Amy Smart).  Of course, he’s in the “friend zone” so he can’t act on his feelings.  After being humiliated by awful classmates, Chris vows to ditch his old life and leaves New Jersey for sunny California, where he gets in shape, becomes a music manager and becomes a real ladies man.  En route to Paris with singing sensation Samantha James (Anna Faris), they have plane troubles and are stuck back in Jersey.  Chris runs into Jamie, and as he tries to charm her with his new and improved self, he just keeps returning to his old dorky ways.  It’s so true that we all regress when we go back home and the scenes with Chris’s mom Carol (Julie Hagerty) and brother Mike (Chris Marquette) really ring true (in an over-the-top comedic way of course!) We’ve all been stuck in the friend zone at one time or another so between that and hilarious one liners (He’s from Jersey! He skis in his jeans!) it just gets me every time. 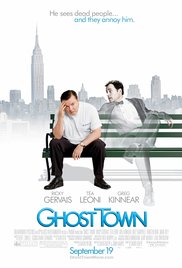 This is not a typical Hollywood comedy as it uses more subtle humor instead of big laughs.  Socially awkward dentist Bertram Pincus (Ricky Gervais) dies on the operating table, only to be resuscitated after seven minutes.  This causes him to suddenly have the ability to see dead people who begin to follow him around, asking him for help.  The most persistent ghost is Frank (Greg Kinnear), who wants Dr. Pincus to save his wife Gwen (Tea Leoni) from marrying Richard (Billy Campbell).  Dr. Pincus befriends Gwen in hopes of getting Frank to leave him alone, and in the process falls for her.  Can Dr. Pincus become a better man in order to get the girl? You’ll have to watch it to find out! 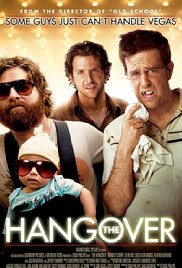 Don’t even bother watching the sequels to this terrific film.  The first Hangover succeeded as it was such an complete surprise—a drunken mystery with great characters and unexpected twists.  The sequels just pale in comparison and border on gross.  Doug (Justin Bartha) is getting married so he heads off to Vegas with buddies Stu (Ed Helms) and Phil (Bradley Cooper) for a bachelor party.  Tagging along is the bride’s brother Alan (Zach Galifianakis) a strange man-child who desperately wants to be a part of the guys’ “wolf pack.”  After inadvertently drugging they group, Alan wakes up the following morning to a trashed hotel room. Stu is missing a front tooth, Phil is wearing a hospital bracelet, and there is a tiger in the bathroom and a baby in the closet.  To top it off, the groom is nowhere to be found.  The trio heads off on a wild hunt of the city to find the missing groom in time for the wedding.  What follows is the craziest and dirtiest scavenger hunt you’ll ever see. 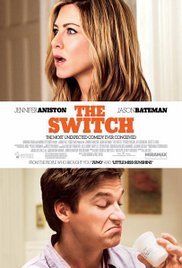 What starts out as a pretty creepy concept turns out to be a really funny and heartwarming story.  Wally (Jason Bateman) is a nice guy with a lot of issues.  He’s what you might call an acquired taste as he’s a bit of a hypochondriac, somewhat socially awkward and just quirky.  His best friend Kassie (Jenifer Aniston) is a real free spirit who wants to have a baby via sperm donor Roland (Patrick Wilson).  Wally gets horribly drunk and inadvertently switches the sample.  Kassie moves away to raise her baby, but returns seven years later with her son Sebastian (Thomas Robinson).  As Wally spends more time with young Sebastian, not only does he bond with him, but he realizes how many similarities they share.  What I love about this movie is that it shows what it is like to raise a unique kid and ultimately it’s all about the strong ties of family. 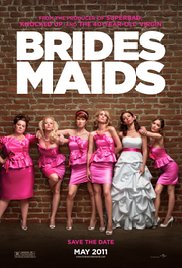 There are some truly hilarious scenes in Bridesmaids, but when I first saw it I was struck with how so much hilarity comes from a lot of real pain for bridesmaid Annie (Kristen Wiig).  While Annie is thrilled that her best friend Lillian (Maya Rudolph) is getting hitched, she is struggling with all of her recent failures.  Not only has Annie’s baking business failed, but she has to live at home with her mother as her ex took her savings when he dumped her.  Lillian has also become chummy with Helen (Rose Byrne) who is beautiful, rich and competing to be the favorite bridesmaid.  This proves just too much for Annie, and things fall apart quickly.  The supporting cast of bridesmaids includes Melissa McCarthy as the ridiculously bizarre Megan, and introduces us to Rebel Wilson as one of Annie’s roommates before she has to move in with mom. 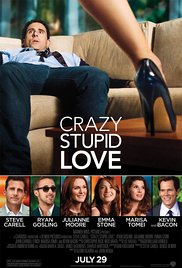 Another movie that finds the funny in the pain, this is the story of Cal (Steve Carell) whose life is turned upside-down when his wife Emily (Julianne Moore) decides she wants a divorce.  A lovable family man, devastated Cal hits a bar and realizes that he doesn’t have a clue how to date anymore.  Gorgeous stud Jacob (Ryan Gosling) notices Cal’s lack of skills with women and decides to take him under his wing and transform him into a real ladies man.  The two hit the scene until Jacob meets Hannah (Emma Stone), a fun and feisty girl who steals his heart.  These two are so cute, they even re-create the Dirty Dancing lift! There are several subplots to the story that brilliantly all manage to weave together to form a terrific, heartwarming and fun story. 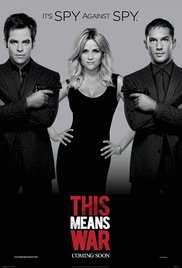 To fully appreciate this movie you have to put aside one disturbing premise—and if you can, you will have a blast with this film.  Best friends and CIA agents FDR and Tuck (Chris Pine and Tom Hardy) have been sidelined when they become a terrorist target.  Tuck, a divorced dad, decides to start dating and sets up a meeting online with Lauren (Reese Witherspoon).  While the date goes well, she then meets FDR and sparks fly for them as well.  Unsure if she should see two guys at once, Lauren’s friend Trish (Chelsea Handler) convinces her to date both and then decide which one she prefers.  When FDR and Tuck realize they are dating the same girl, they unleash their best spy skills to learn about Lauren’s tastes and mold themselves into the right guy.  While I agree that the whole stalking, lying and manipulating of Lauren is totally inappropriate, illegal and wrong, it does make for some really funny scenes.  Pine and Hardy are so fun to watch together, and it’s nice to see Hardy playing comedy instead of his usual broody and glum roles.

Since I’m focusing on movies released after 2003, I couldn’t include some of my favorites.  For classic laughs check out Some Like it Hot or The Philadelphia Story (the original version with Katharine Hepburn!) For full on laughs try Meet the Parents or A Fish Called Wanda and for laughs with a little love thrown in try Tootsie.  Enjoy!

Your husband kills mosquitoes for a living –...