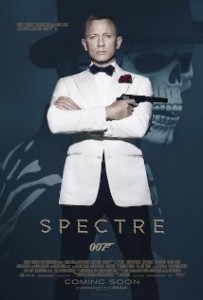 I do love a good James Bond movie. From the first notes of that iconic theme song to the awe-inspiring opening sequence, a Bond film is guaranteed to take you on a heart-pounding adventure. It’s also a perfect date night movie as there is something for everyone–guys get car chases, Bond girls and lots of explosions. Girls get to watch Daniel Craig for two hours. It’s a win-win scenario!

Daniel Craig’s steely and angry interpretation of Bond is actually my favorite. While there have been many great Bond actors and Sean Connery will always be the original, Craig’s Bond is the most realized and authentic character to date. He has moved the role from being a cartoonish spy to a deeply flawed and damaged man destined to forever be a paid assassin with a license to kill.

The film opens with an incredible sequence set in Mexico City during a parade celebrating the Day of the Dead. Not to geek out on cinematography, but there is a fantastic scene where the action is shot in one uncut sequence following the characters through the city into a hotel. From the costumes and makeup to set design and choreography for the parade–this is the glory of a big budget movie.

Bond’s mission is to follow a clue left by his beloved M (Judi Dench) which leads him to infiltrate a secret organization called Spectre. During his quest to root out the evil, the entire spy organization of MI6 is threatened as new surveillance technology and drones question the need for secret agents in the field. This issue is timely in the modern day spy world as the topic of how best to protect the world is constantly debated.

Bond moves through several amazing locales, including London, Rome, Austria, and Tangier en route to his encounter with the evil leader of Spectre, Franz Oberhauser (Christoph Waltz). Their confrontation reveals a shared history that ties together plot points from previous films that creates a continuity in the narrative of Bond’s adventures. I found it odd that Oberhauser was not as terrifying as I would have liked, especially since Christoph Waltz usually scares the heck out of me. He has won two Oscars for playing bone chilling characters, but here he underplays the role and is nowhere near as frightening as the baddie from Skyfall played by Javier Bardem (one freaky nutcase who caused quite a few nightmares!).

I also really missed Judi Dench’s character M. She always brought so much elegance and class to that role and her interplay with Bond was always a highlight of their scenes together.

While I’m not sure that the film needed to tie together past characters into the Spectre web, doing so did create some finality to the Bond story. While Craig is contracted for one more film, I’m not sure he’s eager to slip on the tux and order another vodka martini (shaken, not stirred). I’m hopeful that he will take after Sean Connery (who also left the franchise only to return for another film) and give us one more 007 adventure. While I don’t consider Spectre to be as quite as good as Skyfall or even Casino Royale, it’s still an exciting and entertaining thriller well worth a date night. Enjoy!

UnPlug with Hands-On Learning from Fundanoodle!

How to be Cool When You Suck at...