What Could Go Wrong?

To the untrained eye, it may look like a bad idea to have a 200+ pound man tackling a seven-year-old child.  But I’m a trained professional having been a three-year varsity linebacker in high school and eleven-year stay-at-home dad.  We’ve done this for years and nothing bad has happened.  What could go wrong?

This is one of my kids’ favorite games to play with me.  It’s a rather simple game.  They’re on offense and I’m on defense.  They go to one side of the living room while I wait on the other side defending the “goal line” on my knees.   They get up as much speed as they can in the eight feet of floor space until I “tackle” them with great fanfare.  Sometimes I pick them up and “body slam” them on the couch.  Other times, after a “big hit and a great struggle” I fall backwards and they score.  We all laugh and get up and do it over and over and over again until we get bored.  You get the idea. 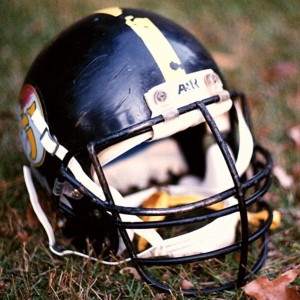 It’s all fun and games until…

All I was doing was playing “tackle” with my seven-year-old son (he weighs in at about 45 pounds soaking wet), when he unexpectedly (first time ever) tried to jump over me while running full speed.  Ooof – he caught me square in the chest with the point of his knee.   It hurt, but it didn’t seem that bad at first.  I figured it was just a bruise and would heal quickly.

Finally, after a week of not being able to sleep more than a half hour at a time due to the sharp pain in my chest when I moved at night and not being able to take a deep breath, twist, laugh, cough, sneeze or pick up my kids without a sharp pain, I thought I should get it checked out.

..Someone gets torn rib cartilage

Yes, you read that right I ended up with torn rib cartilage. Turns out it’s like having broken ribs, except I don’t get the satisfaction of saying I have broken ribs – just torn cartilage.  Recovery time is 4-6 weeks.

Am I feeling a little deflated and embarrassed for being sidelined by a ‘work-related’ injury from my son?  Yeah, maybe just a bit.  I just hope I’m not alone.

Has anyone else been injured playing with your kids?  If so, I want to hear about it.

Catching up with Smarty Moms Mai-Lis Bahr and Meghan Hampton

From our friends at Little Otter: Top Priorities...

Zack, if all you’ve gotten is busted rib cartilage at *cough* our age, you’re doing well. I busted up my knee playing Ultimate last year. The torn ACL was np, but the bone bruise… still can’t run over a year later. Worst part? Wondering if I’ll ever get to run with the kids, teach them more basketball, etc. I don’t mind having ripped the knee up trying to stay active while having competitive fun, but I almost wish, if I had to have done it, I’d done it with the kids. It’s great sharing the time with ’em, especially teaching them to be physically healthy. Living room football sounds like a good foundation.

Painfully, a guy at church saw my brace & asked if I wasn’t too old to play sports. Answer? I am now!

If our warranties ran out at 24, we’re lucky someone hasn’t donated us to the Kidney Foundation twenty years later. Glad to hear you’re doing fairly well, all things considered.