We were “those” people. We are “those” people. We are amongst the growing trend of people who watch cable alternatives. For almost four years, we did not subscribe to any cable service. With the aid of a sometimes working self-mounted TV antenna, we occasionally received fragmented local channels. We occasionally remembered to tune into one of those channels. Then we moved and our new home came with a theater room. Naturally, my husband wanted to see football games on the big screen so we subscribed to cable again. It lasted one year with only a handful of football games actually watched. Cable has been cancelled once again and for all.

It all started in a moment of frustration. I realized that the only time the television went on was for SpongeBob and Jessie. My husband and I were only watching Netflix programs, if we watched anything at all. I remember reprimanding my then five year old for yelling at me. Her response was no where near an apology. In fact, she reared up and yelled even louder, “If I was yelling, this is what it would sound like”. My eyes immediately went to the source of her new found emboldened confidence: the TV. And in that moment, I realized that we were paying a lot of money for SpongeBob’s “wisdom” and Jessie’s “etiquette” lessons. The cord had to be cut. My threat wasn’t taken seriously until the remote lost its channel surfing capabilities. 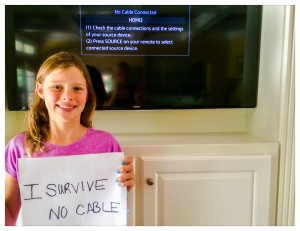 Quitting cable was incredibly easier than you might think. Not one of us experienced symptoms of withdrawal, since we have Netflix as our “patch”. And for the year we subscribed to a cable service, it was not embraced the slightest. It went mostly unnoticed, quietly residing in our house. The only one who payed any attention to it was our credit card, who winced every time it was auto-billed. Not one of us of us returned to the habit of turning on the TV and we all continued to default to Netflix a few times a week. Okay, that is not entirely true. My nine year old developed an insatiable appetite for HGTV. At least she was learning an applicable skill: home remodeling and decorating. But still, how to you justify a $100+ a month subscription to HGTV? Plus, Netflix now streams “Love It or List It”. We quit cable once again and no once winced the slightest. Not even my HGTV junkie who has since forgotten about the show.

I then started thinking about some of the reality shows we used to watch prior to kids and when they were little. It occurred to me that while we no longer watch them, we live them in our own way. Here’s what I mean:

Hoarders: All I have to do is walk into my younger child’s room and witness the mayhem. There literally have been paths carved out of clothes, toys, books, wrappers, and pets. Fortunately, no pets were harmed and the emotional breakdowns lasted less than an hour.

Intervention: Let’s go back to that theater room and how it is used now: gaming. Summer has brought the gamer out of my son. I have been enabling his insatiable appetite for video games by simply getting consumed in my own work and activities. I enter the dark room and discover him in his pjs, un-showered, starving, and asking for money to buy new levels. Intervention has occurred more times than I want to admit (and he’s “missing” right now as I type).

Keeping Up with the Kardashians: Well the last name might be different, but we are all trying to constantly “keep up” with ourselves. No longer can I reply on just remembering. I have moments where I scare myself and think I am “Still Alice”. I forget things even when I write them down. Anyway, when you have a family there is certainly a lot to keep up with, especially when your daughter’s social calendar looks way better than your own. My husband’s travel schedule is a project in itself. While we don’t have the Kardashian level of drama, we do have our own. Like the fact my husband’s passport is arriving the day our flight leaves. Tune into the next episode to see how that one works out. I wish I was privy to the preview: I have a feeling it will be full of excitement.

Chopped: A new episode can be seen in my kitchen nightly. I don’t plan meals. Ever. And I hoard recipes but never use them. So I am left with coming up with a dinner using only the ingredients in our house and present to three live judges (sometimes five if the dogs successfully use their puppy eyes to get scraps). I have to say I win most of these episodes.

Cake Boss: Whenever we have anything as decadent as a cake or any extravagant dessert, someone in our household becomes the “cake boss”, deciding who got the bigger piece and who deserves the last piece. Actual wars have broken out in our home over dessert. The instigator shall remain nameless.

Pawn Stars: Who can sell the most on eBay in order to buy the newest and greatest of what’s next? For years, my kids have been pricing their belongings on eBay in order to justify a new purchase. They present their items as if they were trades, collateral. My husband and I (apparently the pawn shop owners) have even received “what if” spreadsheets of items selling at high, average, and low prices.

Shark Tank: It seems that one member of our family is always coming up with business ideas, even getting the others to invest. The problem is the ideas don’t stop swirling around my head and my sharks call me out on it all the time. They are brutal. This is the one reality show that I would actually want to be selected for real TV.

*Disclaimer: I had to google reality shows since I have never watched most on the list above, but as you can see, I easily related to them, so I get why people watch them. We all need a break from our own realities from time to time. I just had mine, so it’s now time for another Bahr episode of Intervention.

From the Smarty Health Corner and CEENTA: Swimmer’s Ear

I’m the reason my wife is stressed out...

From the Charlotte Mecklenburg Library: Get Set for...

From our friends at the Mosquito Authority: Cheers...