September is Childhood Cancer Awareness Month. We are devoting this month to spreading as much awareness as possible around Charlotte to help cure pediatric cancer. We’ll have many more stories and posts to come, but our first is on sweet baby Andrew Weaver. He’s a local six-and-a-half month baby who was diagnosed with cancer at the beginning of the summer. He’s currently undergoing treatment at Levine Children’s Hospital. We recently talked to his mother, Kelly – our interview follows. We can’t thank Kelly enough for taking the time out of her busy day to chat with us. We are so honored to share Andrew’s story. Kelly has also set up a CaringBridge site for Andrew – go there for more on his story and journey. 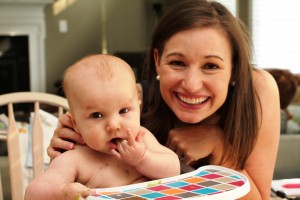 Tell us about Andrew. He is the cutest baby in the whole wide world. He’s such a happy baby – always smiling and laughing. He’s inquisitive, loves sucking on his toes, and LOVES to be outside. I joined a Stroller Strides group when he was about 3 months old, and we’ve really enjoyed the camaraderie, the workouts and runs outside. He’s 6 ½ months now, and his newest trick is rolling over – he flips himself over and grins with pride. He’s our first child and a really special little trooper. 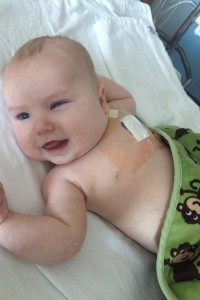 When did you first realize something might be wrong? When he was about 2 months old, we noticed that his left eyelid drooped and that his left pupil was slightly smaller than his right. We went to a pediatric ophthalmologist who diagnosed him with Horner’s Syndrome. Then, a couple of weeks later, he came down with what we thought was a common stomach bug. But after an X-ray and CT Scan, the doctors found the large mass in his chest. We were at Carolinas HealthCare System Northeast then. It was early on a Friday afternoon (June 12 to be exact), and we were suddenly whisked away by ambulance to Levine Children’s Hospital. To say it was scary is a complete understatement. I thought we’d get our things together, and my husband and I would take him to Levine Children’s Hospital, but they transported us immediately from Northeast. We ended up spending 18 nights there.

We don’t have family in town, but my parents drove 26 hours roundtrip from Florida to be here for a mere 24 hours – they wanted to meet Andrew’s doctors, be with us, and most importantly be with their grandson. Our family from Virginia came for his first surgery and have visited several times since we returned home from the hospital. We spent my husband’s first Father’s Day in the hospital, which was completely unexpected, but we made the best of it. My husband took two weeks off of work, and I resigned from my job. Our world totally stopped.

What was Andrew’s diagnosis? The oncology team at Levine Children’s Hospital diagnosed Andrew with neuroblastoma. He’s had four surgeries since his original diagnosis – his first was a biopsy to see what we were dealing with. The others were for the port through which his chemo is administered. He’s been sedated several times and has had numerous blood transfusions – and he just turned 6 ½ months. He’ll go in for his fourth round of chemo on Tuesday – hopefully it will be his last. We’ll have a scan in mid-September to determine if he is ready for resection surgery or if he needs two more rounds of chemo. So far the tumor has responded really well to chemo, so we’re hoping for a good scan in a few weeks.

Tell us about being at Levine Children’s Hospital. The nurses – especially the night nurses – are amazing. They do their job in a way that is simply remarkable. They’re so knowledgeable, compassionate…just amazing. I get really emotional when I talk about them – they’re very special people.

We were at Levine Children’s Hospital a shorter period of time then a lot of families but people just understand that you’re there for a reason. You see people with a parent badge in the hall or in the elevator, and we all have the same look. In a way it’s nice to know we aren’t alone.

How have you and your husband coped over the last couple of months? Nothing can take the emotion away – the duress – but how it affects us is a choice. My husband and I try to do little things for each other – like leaving notes at home saying “I love you” when one of us isn’t there. Just the tiniest little thing helps. And doing anything normal is nice. Like laundry. My husband will tell me to not worry about doing the laundry, but I like the normalcy of folding t- shirts, putting away clothes. Normal things are nice.

We have received an overwhelming amount of support from family, friends and co-workers. My brother surprised us with a Team Monkey Day. Team Monkey is the team we ask everyone, including doctors, nurses, anesthesiologists…anyone who was part of Andrew’s care, to join to help Andrew to a full recovery. My brother arranged that at 9 a.m. on July 16 all our family and friends would wear the same Team Monkey shirt, which he had printed, and bombard us with messages via text, Facebook and email. It was pure love and dedication to Andrew’s recovery in motion. Team Monkey continues as my husband’s team at work all now have Team Monkey shirts and sponsored their own Team Monkey day. My Stroller Strides group has arranged a Team Monkey team for the Isabella Santos Foundation 5K. 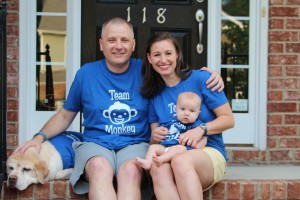 When we hear of a family going through something like this, our first instinct is to help. What are some ways your friends and family have been the most helpful and what is your advice to someone reading this who wants to help friends in a similar situation? Meals are so helpful. My Stroller Strides group put a meal train together for us, and I can’t tell you how amazing this was. Not only was it so great to not have to think about planning, shopping, and cooking, but it was a great way to stay in touch with friends, co-workers and neighbors. When friends would drop off meals, they’d stay to visit. Having this connection and time with friends was wonderful.

I think one of the best ways to help a friend in a similar situation is to let her know you’re thinking of her. A simple note, text or call with no pressure to respond. If the family is at the hospital for an extended stay, find restaurants in the area or in the hospital (Levine has a Chick-fil-A and Panera on site) and give them gift cards to those restaurants. Gift cards or food vouchers to the hospital’s cafeteria are appreciated as well.

If the child is older, find out his or her favorite magazines or books and send them to his room. Any distraction helps. We’re able to easily distract Andrew because he’s so little, but I imagine it’s harder with older children.

We established a CaringBridge page even before we received the official cancer diagnosis. Posting updates to CaringBridge has been an effective way to let family and friends know about Andrew’s progress in a more private setting than Facebook. Writing the posting has been helpful to us as well and the comments family and friends leave are an amazing source of inspiration. If families are looking for a way to communicate, CaringBridge would be my recommendation.

What’s the best part of being Andrew’s mom? That I get to be his mom. I ask Andrew all the time how I got lucky enough to be his Mom. I feel fortunate that I get to be here and help him at a young age – he’s being so brave for us. My husband and I want to make sure he’s comfortable, developing appropriately, and being a normal baby. 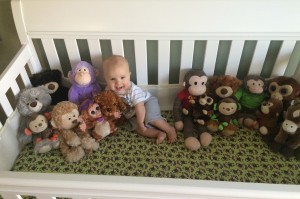 From our friends at Foreign Language League: We will come to your school

Kick off Fall with ivivva Charlotte!

He didn’t marry me for my laundry skills

Back to School means Back to MY GYM...

Someine shared your article with me today. It brought back so many memories. My son, Jordan, was just 2yrs of age when I took him in for a regular well check up. When his pediatrician examined his eyes, he felt he “saw something” and told me to be safe, he was sending us to have a CT right from his office. Afterwards, I was told to return to the doctors office. I knew that couldn’t be good. They had found a brain tumor. We were sent immediately to Shands Children’s Hosp in FL. Final diagnosis Piilocytic astrocytoma. Initially, they really felt there wasn’t much they could do. I remember one doctor telling us to “take him home and love him, I give him 6 mo”

I too remember the stand still of time. I used to get angry just to hear if someone went car shopping etc. I felt time should stand still for everyone. People meant well…but, I got sick of hearing them say “I understand”…no they didn’t. Whether I alienated them, or people just didn’t know what to say… It was pretty lonely.

I eventually (after a couple weeks) got angry. I REFUSED to accept this. I started searching the Internet. Looking for any articles on this horrible thing trying to take my baby. I eventually submitted scans and reports to several locations around the US…and waited. It didn’t take long. I heard back from three places. Seattle, DC and Houston. After researching, we went with Houston. We were there within a week. They operated in our second day there and didn’t leave for 6 weeks.

The purpose of this story is this. Jordan is a thriving 23 ( yes twenty-three) Year old, thriving young man now. I won’t say he doesn’t have some health issues, but they are minor and do not really disrupt his life too much.

Never quit reaching for more. Never accept negativity. There is ALWAYS hope and someone with a answer. The path may not always be easy, but you find a strength inside you never thought possible to posses.

I will pray for your family and that sweet little face. Keep the Fath

Love the Weavers! Kelly and I went to college together (yes, Jen she’s a GATOR! An Edu-Gator nonetheless). We spent many hours in Norman Hall:) Always the optimist, one of the most genuine, kindest people you’d ever meet. Sweet Andrew is a fighter! I can’t wait to get my hands on him again. Prayers work! I pray every day for this sweet boy and his family. I know we’ll be reading an update on this story one day real soon…one that includes a very happy ending. Stay strong Weavers! Sending lots of love your way! xoxo, Amanda Schiffer

Of course she’s a Gator, so glad to learn that she is your bud! We are in awe of Kelly and hold her family high in our prayers. And now I’ll add the Gators We are the Boys to my prayer chant:-) xoxo