From the Smarty Book Club: An Unconventional Love Story, THE ROSIE PROJECT 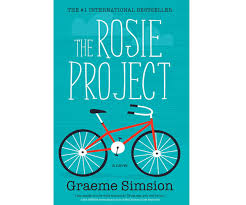 I’m going to assume that very few of you Smarty Pants readers are socially inept but brilliant male scientists. But—if you were, and you had come to the realization that you should obtain yourself a wife, how would you get one? The obvious answer: you would administer a questionnaire to eligible females, designed to filter out the unsuitable ones. (Full disclosure: I took the short-version quiz online —here— and scored 38%. I’ll try not to hold it against the author.)

“I’ve sequenced the questions for maximum speed of elimination,’ I explained. ‘I believe I can eliminate most women in less than forty seconds. Then you can choose the topic of discussion for the remaining time.’
‘But then it won’t matter,’ said Frances. ‘I’ll have been eliminated.’
‘Only as a potential partner. We may still be able to have an interesting discussion.’
‘But I’ll have been eliminated.’
I nodded. ‘Do you smoke?’
‘Occasionally,’ she said.
I put the questionnaire away. ‘Excellent.’ I was pleased that my question sequencing was working so well. We could have wasted time talking about ice-cream flavours and make-up only to find that she smoked. Needless to say, smoking was not negotiable. ‘No more questions. What would you like to discuss?”

Don Tillman is an awkward but endearing nerd who researches genetics at a university in Australia. He’s got some stuff working for him: he’s handsome, he’s very fit, he’s well-employed. He’s got some stuff working against him: He can’t read faces, or understand sarcasm, or recognize cultural cues. In fact, he is straight-up bewildered by the emotional manifestations of other humans, which leads to all kinds of social disasters for him. (Imagine meeting someone who immediately blurts out his assessment of your BMI.) Although Don never identifies himself as having Asperger’s syndrome, the reader will clue in to this as a likely diagnosis within the first few pages. It’s obvious, in any case, that Don is not getting a lot of action from the ladies. So he commences The Wife Project, and sets about trying to scientifically identify a good mate.

Enter Rosie. In film industry terms, there is a stock character who has been dubbed the Manic Pixie Dream Girl (MPDG). She’s usually a bubbly caricature whose purpose is to enliven some boring guy into recognition of all the quirky charm the world has to offer. She hauls him out of his rut and he goes all madcap. At first glance, Rosie seems to be the MPDG of this novel. She’s an eccentric barmaid who bombs The Wife Project survey in every possible way. She’s non-punctual, she’s foul-mouthed, she drinks and smokes, and she has an aversion to micromanagement. But Don is inexplicably drawn to her. As the story progresses, Rosie gains dimension; she becomes less of a MPDG and more of a complicated, independent person with her own goals and ideals.

While The Rosie Project enjoyed mainly glowing reviews when it was published in 2013, there were a couple of criticisms that kept cropping up; first, that the plot veered into formulaic and predictable rom-com territory (and in fact, it was originally written as a screenplay, which might account for some of the overly cute scenes) and second, that the author relied too heavily on cliches regarding people with Asperger’s syndrome. In my view, both of these issues are overcome by the quality of the writing. The prose is brilliant and Don Tillman becomes real and lovable and knowable in a way that few literary characters ever quite do. And it’s funny.

“But I’m not good at understanding what other people want.’
‘Tell me something I don’t know,’ said Rosie for no obvious reason.
I quickly searched my mind for an interesting fact.
‘Ahhh…The testicles of drone bees and wasp spiders explode during sex.”

Like its protagonist, THE ROSIE PROJECT is intelligent, amusing, and at times, charmingly awkward. I loved it.

The Power of Theatre: The positive impact it...

Hilarious! Sounds like such a fun read. Will add it to my list for sure. Great review!