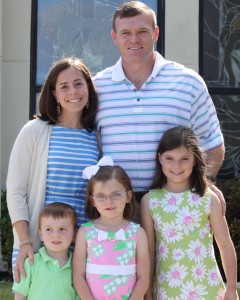 I’m in. That’s Laura Saunders in a sentence. She is genuine, high energy, always laughing, and the first to raise her hand if you need help.

She is a problem solver. If she sees a problem, she comes up with an idea to solve it AND then runs with it. A real do-er.

I always marvel at athletes who competed at the collegiate level. Laura was a soccer powerhouse at Furman University and was part of Furman’s inaugural women’s soccer team.

Besides competing on the team all 4 years she was there, she earned many accolades. She was awarded the Southern Conference “Freshman-of-the-year”, chosen by coaches from colleges such as Furman, Elon, App State, UNCG, Wofford, Georgia Southern, etc. She was a two-time All-Southern Conference first team selection. And…she was selected by her teammates as MVP her senior year.

Laura didn’t tell me about ANY of this soccer business. I knew she played soccer in college and that was it. She is super modest. If a stranger asked her if she ever played soccer then she would offer “yes, I played soccer” and they would walk away thinking she played in the rec league as a child and that would be it.

Well, I Gooooooooooogled the fool out of her to uncover all of these amazing details about her soccer career at Furman. It was impressive. (Thank you, interwebs.)

1. The phrase you say to your kids all.of.the.time at home is…
Please put the cap back on the toothpaste and “Say yes, please” and “Say no, thank you”. It will sink in eventually!

2. If you wrote a parenting manual, the title would be…
Get Tough!

3. Behavioral trait you hope your children don’t inherit from you?
Impatience and being fashionably late

4. Funniest thing one of your kids has ever said to you?
At the beach, one of my daughters said, “I want to wear a zucchini like you, Mom.”  I promptly informed her that it was called a bikini! So cute!

5. One word that describes you?
Energetic

6. A TV show that you AND your husband watch together?
Sopranos, loved it!

7. Who is your celebrity crush?
Matthew McConaughey is not too shabby!

9. App you can’t live without?
Google Maps, I would have been lost in Charlotte without it. Also, Pandora…it gets me through every run!

12. What splurge is well worth it?
A really good pair of jeans!

Fitness Friday: Flywheel’s Miki Russ dares you to double up

Smarty Tips for Packing for Sleep Away Camp

I have loved getting to know Laura at school this year! Such a sweet and genuine person to be around.

So great to see Laura featured on CSP! I have enjoyed getting to know her through CCK.

One of the best role models a gal could ask for. Laura Wise Sounders was a hack of an amazing soccer player, team mate, and inspirational leader. I am so happy to see her featured here and am not surprised that she still has the charisma and endless energy of our Furman soccer days.

You forgot to write that Laura can drop it like it’s hot too! Loved meeting and dancing with her Sat

Now THAT is the truth, Margaret!! This made me laugh out loud!!

LOL, yeah she can!!! That was so much fun! Loved this post – Laura really is such an amazing friend, mom, wife…