As the school year wraps up (seriously, WHEN IS IT GOING TO WRAP UP?!), I just have to say: 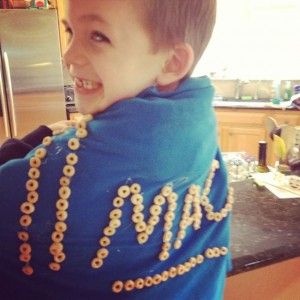 Thank you SO MUCH, kindergarten teachers.

They take babies and make them first graders.

I guess I had no frame of reference with my first child – she was “big” to me because she was my oldest, and she really was big compared to my others. She didn’t seem like a baby to me. I had put so much time, effort, and money into her activities, her early reading skills, her math skills, that I didn’t really appreciate just how much the teacher was doing during the hours between 8 am and 2 pm. I hate that. I think I somehow took more credit than I deserved.

My second kindergartner was a TK-er, and everything comes a little easier to those TK kids. His kindergarten teacher did it all, too, but I missed it because he seemed so much older to me because, well, he was. He should’ve been in first grade technically. Plus, because he and his big sister are pretty close together, he was always lumped in with my oldest when it came to time and attention, so he got plenty of it.

My third? Not so much. Yes, I’ve read to him along the way and we’d occasionally practice spelling and writing his name, but not with the same gusto. He’s never had a lot of one-on-one with me, and I honestly never put a lot of time into teaching him early reading skills (NOTHING like I did with my first and second). He didn’t do TK, and he could basically read his name and a few (very few!) words when he entered those kindergarten doors in August.

Well, get this: his kindergarten teacher taught him to read, spell, and write. Yep, she deserves credit for every single word he picks up and puts down on a page (actually, preschool teachers deserve credit, too – they primed the pump!).

And what’s more amazing is that she has been able to teach that whole classroom full of wriggly, antsy, restless little bodies. Those caged animals. That sweet, but oh-so-energetic kindergarten class of miniature people.

Thank you, Mrs. Giroux. Thank you, thank you, thank you. You took my third baby  – this kid who is the second half of the middle, who isn’t the oldest, the first boy, or the baby of the family, who isn’t the first or last to do anything, who has a blank baby book, who is loved just as much as the others in the family but doesn’t get as much attention as he deserves – and made him a first grader. And you did it while I was frantically helping my fourth grader through the tears of long division, answering questions from my second grader like “What does Jason Derulo mean by ‘Talk dirty to me’?”, and screaming for the baby to put down the swords. You did it while I kept nodding off while he read Green Eggs and Ham and without one night of real homework.

Oh yea, I know the obvious. I know teaching reading and writing is actually a kindergarten teacher’s job, but I feel like these days we as parents put so much pressure on ourselves to supplement, engage, interact, and teach our kids outside of school hours that we lose sight of just how much our teachers actually do. Sometimes we tiger-mom ourselves into thinking we should take the credit for how much they’ve grown during a school year.

Well, I’m here to tell you, I didn’t do it. She did it (and so did my first and second’s kindergarten teachers – I am just so sorry I am just now paying attention!). She deserves full credit for teaching this little boy (who will hopefully one day become a successful man despite me) to read and write. He will never lose it, and he will always use it.

I feel the same way about all teachers. They ALL amaze me – especially the ones who were born to teach. But, kindergarten teachers are in a different class (no pun intended). Visit a kindergarten room, and you’ll see why.

And good luck to my fourth’s kindergarten teacher. If I lost all helicopter parenting with my third, there’s no TELLING what kind of life skills my fourth will need when he walks through those kindergarten doors (note: he IS potty trained, so we’re good there).

Smarty Alert: Head to My Gym SouthPark for...

Couldn’t agree more Cheryl! Ben is a different kid on every level now than when he entered Kindergarten and there’s no doubt it is all thanks to Mrs. Giroux!

I love this Cheryl. So true how our viewpoint changes with each child.

I’m tellin ya, the MIDDLE children will prevail!! This generation, forget the first and the baby – the middle kids will be the ones who are self-sufficient, scraping up every bit of knowledge they can muster up! Such a cute post!

You are so right, Jen!

Cheryl, you brought tears to my eyes. This is beautifully written and much appreciated. On the other side of the coin, we as kindergarten teachers are blessed that we are entrusted with your babies and are allowed the opportunity to help them grow into first graders. We get to see the magic happen firsthand and experience the joy of when those babies read their first book or write their first complete sentence. Each and every day is exhausting, but the laughter, unbridled joy and excitement, and unbelievable progress that we get to experience is an awesome reward. Thank you for sharing your babies with us!

I couldn’t agree with you more!!!!

Love this one Cheryl!! So proud of sweet Mac 🙂

As I was first reading this, I was thinking about how sweet it is and that I should send it to our kindergarden teacher and then I realized that they are one and the same! We were lucky enough to have Mrs. Giroux for kindergarten last year and had such a wonderful and loving introduction to “real” school. She set the bar very high for ALL the teachers to come.

So sweet! Thanks Cheryl for putting this special year in perspective. Having a TK grad move onto Kindergarten, I think I’ve taken for granted how Kindergarten is such a transition year and a lot of work happens, due to the effort of those wonderful teachers!