When Kara and I first met, I never thought that we would end up with the friendship that has grown over the past four years. She is from New York and I am from Charlotte. She was loud and said what came to her mind, I was not.  I coined her my “New York Housewife” and she loved it! And I loved my new found friend that I never thought would be. 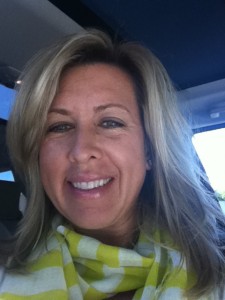 Kara has brain cancer, and they say she’s dying.

Actually she is living every moment to the fullest and to her best.  Since learning of her brain cancer, she vowed to never be negative or let a bad mood take hold of her.  She is continuously happy and full of laughter and fun. She looks for the best in everything and fights to make everyday her best day ever .   She has lost/filtered some of the New Yorker in her, (she is all too proud to say that she no longer drops the f bomb since her diagnosis) .  To look at her you would never know the battle that she is fighting everyday. She forgets easily, but explains to anyone nonchalantly, “I have brain cancer so I forget.”  She loses names and places, there are sticky note reminders all over her house, she doesn’t drive very far.  Every moment counts for her and she makes each her best.

December  2012, Kara was driving and could not keeping her car from swerving and hitting curbs .  She called  her neurologist due to this and debilitating headaches, vision difficulties and other symptoms that she originally thought were attributed to her MS diagnosis which was made in 2004. However, Kara’s instincts told her these symptoms were unique from her past MS flare-ups and something was very wrong. Her neurologist scheduled an MRI the next morning, and soon into the test, the radiologist was sending images to Kara’s neurologist for collaboration and interpretation. Undoubtedly, they concurred what they were seeing was a brain tumor.

December 6, 2012  her neurologist told her that she had a Stage 4 glioblastoma, the most lethal cancer there is.

Within days, Kara and her husband, Ed were meeting with one of the lead neurosurgeons in Charlotte (CMC Main) to further interpret the MRI results and formulate a plan. The doctor explained that Kara’s situation was “problematic.” The tumor was deep within her brain and large…slightly smaller than a golf ball, growing rapidly.  Surgery was scheduled December 13, 2012 to remove 60 – 70% of the tumor. 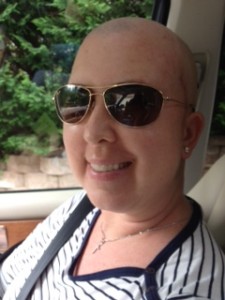 Radiation followed but treatment was suspended due to her brain filling with fluid.  Valentine’s Day 2013 back to surgery to drain the unexpected fluid from her brain. Her husband and family prepared for the end, the end that was hitting them hard and sooner than expected.

Blood clots followed and she triumphed over those too.

She slept for 8 months and does not remember anything, which may be a blessing from above.

Her Oncologist explained that she most likely had a year to live.

Today, that same Oncologist refers to Kara as a miracle.

Before  glioblastoma, life was very different for Kara and her family.  She was a triathlete and a start up business owner.

Inspired by Kara’s daughter, Chloe, who thought it would be super cool to have a necklace that turns into a bracelet that turns into a hair tie, all in one swoop; Trip.i.t.s! were born.  Each necklace and bracelet came with a hip charm and a message with phrases like “Dream Big”, “Stand Tall”, and “Smile” to name a few.  Unfortunately, with the diagnosis of glioblastoma, Kara and her business partner were not able to continue this business venture.  They have an extensive inventory on hand and will be at the annual Girls on the Run 5k next weekend selling their Trip.i.t.s! Tri (personally inspired trinkets to share!) 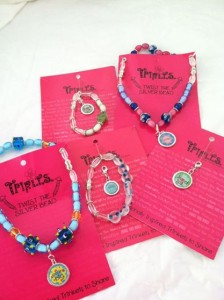 Kara has always been very active and athletic.  Before cancer she ran a total of 4 marathons, many half marathons and 5k’s and competed in at least 6 triathlons.

After the holidays Kara casually mentioned to me, “they want me to do a triathlon”.  My initial response was total shock that whoever this “they” person was would suggest such an enormous task of her while she battled this cancer.  I came to the conclusion, on my own, that with her memory issues associated with her cancer, she was just confused, no way could she be expected to train and be strong enough to compete in a Sprint Triathlon.  Then, a few weeks later she asked me to join her tri team, she was going to do this and I knew at that moment that she would and could.

Deer in the headlights moment, I don’t swim.  I mean, I know how to swim, as in keep myself above water.

I swam swim team when I was a kid, but I don’t really swim, for a few good hard reasons.

1. Chlorine is so bad for color treated hair, yes truth be told I am no longer a “natural” blond.

2. Speedo bathing suits can give a girl awkward tan lines and do nothing for your shape.

3. And well, it is just not an attractive sport. (See picture) 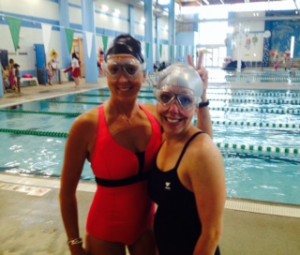 But what do you say when your friend, who is battling the most deadliest cancer there is, asks you to swim with her?  You jump in and learn how to swim, like really swim.

Since late February, Kara and I have been meeting to swim 2 – 3 times a week. We actually have routine, and have it down to a science.  I bring her son, Connor, and my girls home from school to her house.  I race to the powder room to change into my suit and the kids get settled to have a snack and begin homework.  And then she and I are off to the Harris Y to swim and the kids….. well, the homework that was set out has been discarded and they run around a play for an hour or so. (Of course when we get home they are back at the kitchen table working, and so they think they have fooled us!)  When we first started our training, I could barely complete 4 lengths without taking a break and wanting to sneak out of the pool.  Now if Kara is not able to swim with me I am quick to text her how many laps I completed in the hour, all without embarrassment.

Tomorrow is our triathlon in Huntersville. Ready or not we are racing with Kara leading us all the way.

There are 15 of us, including Kara’s husband, Ed and daughter, Chloe, on Kara’s tri team. Some of the team members have traveled from her home state of New York to be apart of this team and rally behind her.

After tomorrow we won’t have to train anymore, but why stop?  I’m not sure how it happened, but I actually like to swim. Selfishly, I enjoy our time together swimming and laughing. I enjoy the precious time I am so fortunate to be given with my friend. She got me in the pool, she got me swimming, really swimming.  I will never again look at a lap lane without fond memories of the past weeks of training that we have endured together.

I’d like to introduce you to my friend Kara.

She has stage 4 glioblastoma.

She falls into the 5% of those beating the odds.

She is an inspiration to us all by refusing to let this stage 4 gliblastoma slow her down for now. 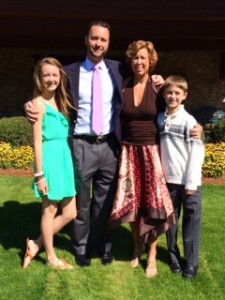 Mirror Mirror on the Wall…I am my Mother...

Smarty Steal: Save on a week of summer...

How a rabbit taught our family lessons

I LOVE this post, Tina!! Kara, wanted to hug you today on the soccer field and tell you how excited I am for your exciting race tomorrow. Home w/ a sick son instead, but my heart and prayers are with you and your team. So much inspiration from your story. So much grace from above. xoxo Brooke

Kara and her family are amazing! What a miracle! Great story Tina.

This is so beautifully written, Tina. Your are a dear friend. I keep coming back to it and rereading. Love that you girls did this. Kara is a ROCKSTAR!!

Thanks Jen. While writing it, I found it difficult at times to put down my words the way I wanted them to be understood. It was therapeutic for me and enjoyed sharing my friend with our readers. T