Home Parenting When the hubby calls the shots
ParentingThings To Do

When the hubby calls the shots

So we all know how nail-biting it is to watch our own kids play sports. We cheer the loudest at the goals, the baskets, and the home runs; we cringe the deepest at the missed shots, fouls, and last-place finishes. A times it feels like we are out on the field. 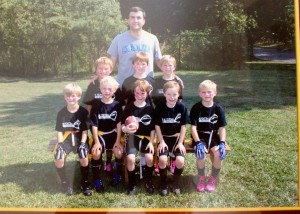 But what about those times when we actually are? Well, maybe not us, but our spouses? What about when your spouse is the coach of your kid’s team? Has this happened to you yet?

My husband is a sports fanatic. He watches ESPN as much as possible, scours Twitter feeds on Carolina sports 24/7, and basically eats, sleeps and breathes sports. He LOVES the kids’ sports (thank goodness we have three sports-obsessed boys!). He never minds taking them to practices when he’s in town, and he’s the first one to volunteer to coach.

And let me just say: I am so thankful. I really am. I am SO thankful he loves the kids’ sports so much and is actually so knowledgeable about them because let me tell you: I’m not. I’m no Sporty Spice, and I frequently look to him to make all decisions about what the kids should be doing in the sports world.

And let me also tell you he’s not that type who is living vicariously through his kids. He doesn’t expect any Michael Jordans from our crew (because let’s just say it: the only thing my kids’ genes have in common with MJ is where their genes went to college). He just LOVES the game (whatever game that is) and wants to be a part of it.

So that being said, it wasn’t a big stretch for him to take the role of assistant coach for my 4th-grade daughter’s basketball team. It was the first year she and her classmates played for the school, and it was the first year we had any sort of stakes: a championship game. And actually, it was the first year he coached basketball. He’s coached flag football and soccer – both “open air” sports. But basketball? In a gym? With terrible acoustics? This was a first. And, as luck would have it, the our first game was head-coached by my husband because our real head coach (who is way calmer) was away on business.

Lawd, give me strength!

Every shout, every play call, every single word he uttered reverberated across the ENTIRE gym. It’s kind of like how loud your own baby’s cry is versus the cries of other babies. His passion, his love for the game, his absolute NEED to win ricocheted around the entire basketball court and landed right in my lap. Here is my text to him during that first game – the last line. He never actually saw it because he was so “in” to the game. 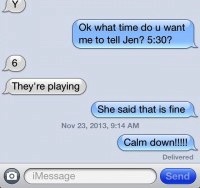 THANK GOODNESS my friends laughed. Thank goodness he isn’t a poor sport, and he’s not one to shout at the refs. But he did try REALLY HARD to get the attention of a bunch of nine-and-ten-year-old girls while all of their parents watched. No small feat. And let me just say, no quiet feat. He was sweating more than the girls when the game was over.

How do other men and women do it? The Bobcats head coach’s wife; Roy Williams’ wife; Coach K.’s wife; Mrs. Rivera – how do you DO it? Do you wear earplugs? Do you block it all out? Do you just chalk it up to another day at the office? (Maybe you do since your spouses are making the big bucks.)

But we’re talking volunteer coaches here – the men and women who lay it all out there for free. My husband and the actual head coach were the most excited at their wins and the most disappointed at their losses. They were crushed they didn’t make it to the championship round, but they were both truly so proud of how far the girls had come.

And, I’m so thankful for Secret Clinical Strength because between a nail-biting game (have you watched a fourth-grade girl’s basketball game lately?) and my husband screaming play-calls in (what seemed like) my ear, my wick-away Lululemon gear was getting its own kind of work out.

Have you experienced this yet, Smarties? Being the spouse of a volunteer coach?? OR, have you found yourself screaming from the sidelines as coach?? How’d it go for you?

Smarty Mom’s on the Town – Wine and Design

One of The Worst Things You Can Say...

When do you give the boot to thumb-sucking...

Smarty Giveaway: A Family 4-Pack to the Charlotte...

I’m gonna need to see this Coach Perry in action. I feel like it will make me feel better about my own coaching rants. The need to win ricocheting into your lap is the best. I have loved to bits coaching my first girls basketball team. (I think smarty assistant coach Wendy will surely agree). Bruce ended up being an assistant too, and looking back, it probably was because he couldn’t deal with sitting in the stands watching me unravel…would rather do it incognito on the bench. I am so much more appreciative of my past coaches now. It ain’t easy. BUT, if you want to feel ALIVE again, coach a team (preferably girls basketball, just saying).

I’ve seen Coach Perry first hand, tough as nails and ALL IN! Love it!

This cracked me up Cheryl. My David has coached soccer for our boys for probably 10 years and I have actually stormed the field to quiet his yelling, er, coaching. I would just cringe on the sidelines praying the other parents were not glaring at both of us! Amazingly, the parents would actually sing his praises after the games, while I was about to lay him out as soon as we got back in the car. It’s just so shocking to hear your man yelling so loud at anyone, much less children! Aagh 🙂 Needless to say, I will have your and John’s back this soccer season!! Can’t wait 🙂

Coach Doug Bowman is a lot like Coach John Perry. You should know since you watched Doug and Zack coach Mac, the Michael Jordan of their bball team this year! If Doug and John were on the court at the same time and moving fast, you wouldn’t be able to tell them apart. Twinsies.

I can vouch for Coach Perry to say that he was AWESOME with the girl’s basketball team and the parents enjoyed his coaching style as much as the girls loved being on his team!