Is Daddy the Tooth Fairy? 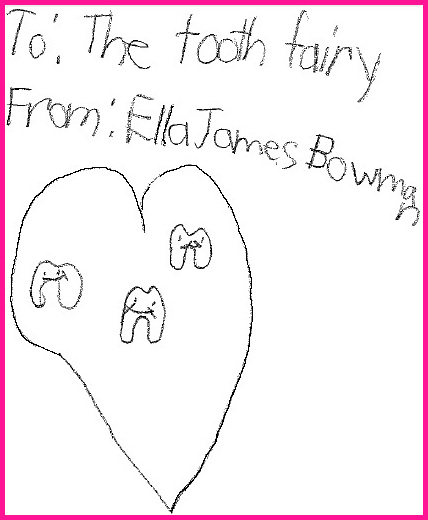 I knew it was coming sooner or later.  The other night, my 7 year old daughter asked me if Daddy was the tooth fairy.  I did what every normal parent does…I lied.  I said, “Hmmm, I don’t know.  I have never actually seen the tooth fairy.”

This seemed to satisfy her for the moment and I put a giant green star in my”w” column to denote another parenting win.

Well, victory is sweet even if it is short lived.

Since I couldn’t provide the answer, she went another route in her quest for the truth.  I suppose if you want the real deal, you go to the source and not some dumb dumb parental intermediary. So, she wrote a note to the tooth fairy.

The tooth fairy standard at our house is a gold $1 coin – one dollar per tooth.   Those of you who are leaving big bucks and treasure hunts and lengthy letters in special fairy font?  You are killing me softly.  Quit it. 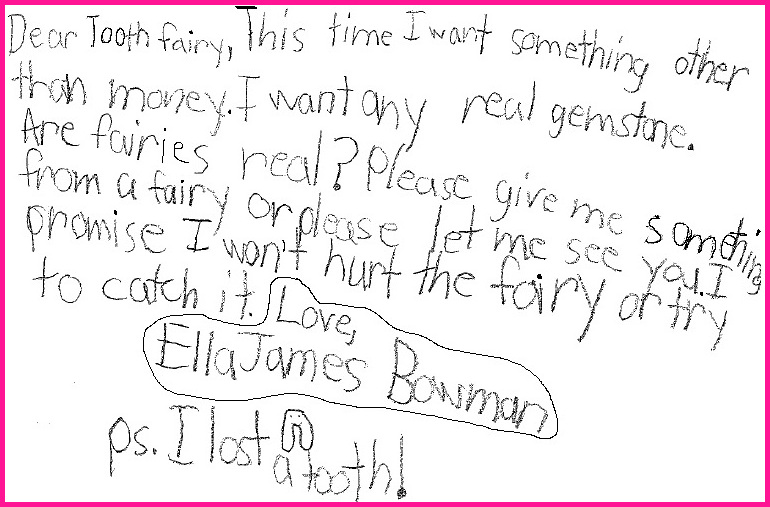 Now, I feel pressured to find “any real gemstone” (oh pray tell, where might I find these? ) or something fairy-ish.  I feel stressed.  I feel inadequate.  I feel like a pawn where a 7 year old is dictating my every move.

On the other hand, I recognize this as a parenting trap and that if I succumb then I’m a sucker because I’m only making more work for myself.  This is a slippery slope because it will only cause her to expect more, more, more and before you know it she’ll be asking the tooth fairy for a red Porsche.

Why can’t a $1 gold coin be enough?  Next time, maybe I will sprinkle some glitter or gold stars into an envelope and throw that underneath her pillow (with the $1 coin) and call it a day.

Smarties, what does your tooth fairy leave behind?  And if you have a cheap source for real gemstones, I’m all ears.

Got sitters? We do!

It Takes a Village

One MIGHTY Miracle – Bee Something For Bee...

From the Smarty Education Corner and The Fletcher...

Girl, don’t fall into that super smarty 7-year-old’s trap. The tooth fairy leaves the gold coin. The end. No need for over-achievers with a fairy….

I have never read anything that associates fairies with gem stones! The pixie dust only works on coins and teeth. Maybe the fairy can leave some extra pixie dust around on this visit, and you can help her come to the conclusion that anything else would have been too heavy for her. Not to mention the fact that she is the tooth fairy, not Santa!

You need to take Ella James to visit Twig (the Fairy) the next time the Renaissance Festival is in NC. Twig is a real fairy (Google her!) and I have personally witnessed her giving smooth, glass, gem-like stones to kids that approach. Unfortunately, she is mute. There’s some back-story about how she lost her voice, but the fairies she travels with were happy to answer my kids’ questions about the tooth fairy. According to them, there is not one, but many tooth fairies. Most are small; about the size of a toothbrush, but no larger than a Barbie doll. (That might explain why some kids get $1 coins and some end up with pillows covered in fairy dust, etc.) For the record, the fairy that visits our house usually brings a $2 bill. Cute letter, btw!

Twig had the same effect on both of my children and I am pretty sure that is why they are still so willing to believe in fairies at age 8! The tooth fairy leaves gold $1 coins at our house too. She also leaves a dated and personalized receipt… and has been known to miss a trip when her computer is down.

I’m clutching my stomach I’m laughing so hard. Ella James is a genius (and will be a great salesperson) and you are hysterical! Go check out the bead section at Michael’s. There are some that will pass for gemstones or semi-precious rocks.