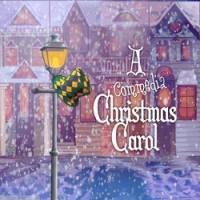 Four actors, one classic Christmas story, and a barrel of laughs.

When the lights went down and the actors took to stage, I was slightly confused. Four actors? How can FOUR actors portray the classic, whimsical, and somewhat scary tale of a Christmas Carol?

It took less than two minutes to discover that I was in for a ride and that four actors popping from role to role is nothing short of hysterical!

Actors Scott Miller, Tanya McClellan, Stephen Seay, and Leslie Ann Giles, collectively known as the Taraddidle Players, together portrayed each one of the characters from famous Charles Dickens tale. They used a method called Commedia Dell’arte style, which is a form of theatre craft which began in Italy in the 16th century. They play off one another flawlessly and their comedic delivery was brilliant! They interacted with the audience and encouraged laughter and banter!

As you probably know, the show begins on a cold evening where Ebenezer Scrooge (played by Scott Miller) taunts his employee, Bob Cratchit, with his Bah Humbug Holiday hatred. As the show goes on, “Scrooge” is warned by the ghost of his former business partner that there is more to life than money. The spirit moans and groans (in a funny and very child friendly manner) that Ebenezer must change his ways. The ghost (played by Stephen Seay) was so charming that I wanted him to stay on stage longer. Scrooge is warned that he will be visited by three spirits who will show him the way to a better life.

The first spirit was a lovely, sparkly looking character who leads the audience through a highlight of Ebenezer’s childhood. The children in the audience whispered that she was a “princess” and her stunning costume certainly made her look like one.

The second (a charming and fun spirit) painted a picture of life as a young adult Ebenezer who had happiness but let it slip by because his love of money was far greater than anything else in his life.

The third was a darker ghost. It didn’t even talk, and while it looked scary, it wasn’t really. The children seemed more interested in this ghastly spirit and curious to see what it would unveil. The spirit showed a sad tale of heartache and loss.

Morning arrives and Ebenezer awakes to find it is Christmas Day and he changes his ways and keeps Christmas alive in his heart forever.

This funny and fast paced tale was easy to follow and told a classic story on the level of children. The actors were incredibly talented and full passion. I loved the smaller theatre (just perfect for little ones) and the one hour showtime (ideal for squirmy bottoms).

I highly encourage you to see this show and others by The Children’s Theatre of Charlotte! In a world full of technology and screens, treating your child to the wonderful full of theatre is a true gift!

Teaching a child about the spirit of the season is forever.

For more information about this show and more, please visit their website.