Have you been to see the Charlotte Football Club play yet? It’s not too late if you’ve let it pass you by! Charlotte’s new Major League Soccer franchise has three more home games this season and two of them are day games, which means they’re a great opportunity to take the kids to a sporting event and not blow bedtime!

This Saturday’s game against defending MLS champion New York City FC at Bank of America Stadium starts at 1 p.m. – the perfect time to take the littles. We are taking our 4-year-old twins for the second time this season. If you’re wondering how they did the first time? Totally fine! I gave them a pair of binoculars each and a “bottomless” bowl of popcorn and they were good to go. They’ll watch the action – and the people – plus there’s face-painting and Dippin’ Dots to add to the entertainment. 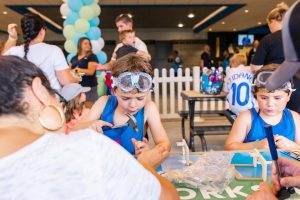 Also, for this Saturday’s game Lowe’s, one of the team’s sponsors, is hosting a DIY Kids Workshop from 11:30 a.m. when the gates open until 2 p.m. (through the first half.) With parental supervision, kids are invited to create their own craft. At a similar event before a game against Columbus on July 30, kids created a wooden soccer player with a moveable leg that could kick a soccer ball into a wooden goal. You can find the workshop on the main concourse (100 level) outside of sections 105 and 106. The workshop is free of charge. Don’t be surprised to catch a glimpse of Minty the soccer ball mascot too. He’s happy to snap family photos. Also, Saturday is Hispanic Heritage Night and the first 7,500 fans will receive a limited edition Sugar Skull Bobblehead.

The other remaining day game is on Saturday Oct. 1 when Charlotte FC hosts the Philadelphia Union. That also happens to be fan appreciation day, and for the occasion Charlotte FC is opening up six sections in the upper deck at Bank of America Stadium. (All but a handful of games this season have had tickets sold in the lower bowl only.) Upper deck tickets are more affordable at $15, $20 a pop, which makes it a lot easier to justify taking the kiddos. 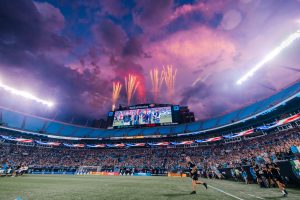 As for the soccer? It’s been great entertainment in and of itself. Ask anyone who has been to a home game this season. The team plays really well at home, the “supporters section” where all the fan groups stand (think college student section) is rocking, and the game is two hours wall to wall, which make it SO much better for family fun than a football or baseball game that drags on for three plus hours.

As for the team itself, if you’re interested in finding out more about the players and Charlotte FC so you can impress your spouse or just because you’re curious about what’s happening , check out my side gig writing about Charlotte FC for The Charlotte Ledger newsletter. The Futbol Friday edition of the newsletter comes out every Friday, with everything you need to know about Charlotte FC, and it’s free, right to your e-mail inbox.

From the Smarty Health Corner and CEENTA: Carolina Panther receives LASIK from CEENTA

The Smartiest Designer Consignment Sale of the Fall...

Must Attend Event for Parents: ‘SCREENAGERS’ at the...