Independence Day, the 4th of July, America’s Birthday – these are a few of the terms that are used to describe the national holiday celebrating the formation of the United States.  But our understanding of freedom, independence, and even what it means to be an American has grown since 1776.  As we come together to celebrate our country this month, let us recognize that this is not only an opportunity to share history, but to talk about how that history is developing, and still being written.  As we look at our past, also take a moment to think about the future and what we can achieve as a nation, and as a united people. Here are some books that not only give insight into the history the Revolutionary War and the origin of our country, but also offer perspective on freedom, hope, and what it truly means to be an American. 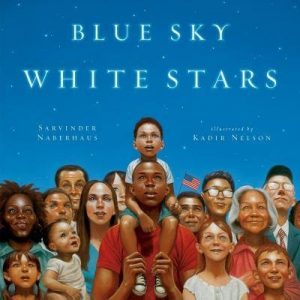 Blue Sky White Stars by Sarvinder Naberhaus
Beautifully illustrated and poetically written, this picture book looks at the American Flag and it’s relationship to the American people. Filled with patriotic symbols, historical events, and national landmarks, this book shows the strength and beauty of our nation in that we are a country of many different people and cultures all “sewn together,” much like the different colors and patterns of our flag. (NP Lexile) 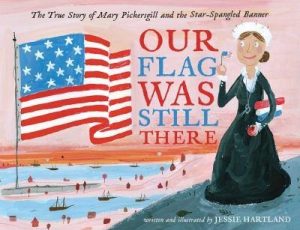 Our Flag Was Still There by Jessie Hartland
Perhaps you’ve heard of Francis Scott Key, and his beautiful balled “The Star-Spangled Banner,” which became our National Anthem. You might have also heard of Betsy Ross and her famed stitching of the American Flag…but have you heard of Mary Pickersgill and her ladies who were asked to create a flag “so large that the British will have no difficulty seeing it from a distance.” This picture book tells the story of the “first” American flag, and the women who were responsible for it. (790L Lexile) 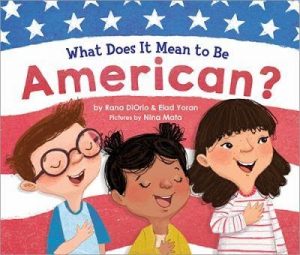 What Does It Mean To Be An American? by Rana DiOrio
This picture book tells the story of a young girl and her parents as they are granted citizenship to the United States. It challenges the thought that being an American is a matter of address, but rather is a spirit in which we work hard together to achieve dreams and goals. This book brings a message of diversity, hope, and also pride. (760L Lexile) 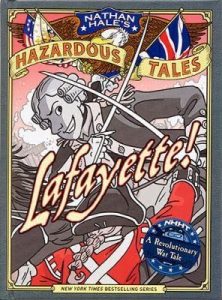 Lafayette! by Nathan Hale
Want a patriotic read that’s a little less conventional? Try this graphic novel that recounts the story of the Frenchman who became a hero of the American Revolution. He not only became a General at age 19, but also went on to fight side by side with George Washington for American Independence. Fast paced and easy to read, this book entertains AND educates. (GN400L Lexile) 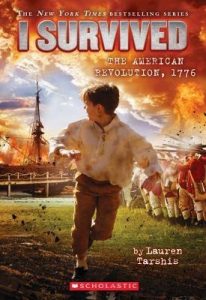 I Survived The American Revolution, 1776 by Lauren Tarshis
Told from the perspective of 11-year-old Nathaniel Knox, this book gives younger readers a retelling of the Revolutionary war in their own voice. It presents the facts and history of the American Revolution amid an engaging story about a boy fighting for his life and his freedom as he tries to find his father in the troops of General George Washington. (660L Lexile)

Thumbs up for Children’s Theatre production of The...