Mama’s got to make room for creative play

“All children are born artists. The problem is to remain an artist as we grow up.” ~ Pablo Picasso

I came across this quote while watching a TED Talk online recently – one I later learned was the most watched TED talk ever, with 50 million views – by an educationalist named Sir Ken Robinson. (It came out in 2006. I’m a little behind.)

I stumbled upon the clip when I started thinking about this blog and Googled “benefits of creative play.” I was looking for a pithy quote from a child psychologist or a nugget of wisdom from a funny mom blogger that could tie a bow around what I’ve been watching around my house lately: the looser I let the reins on what my children are playing, the better off they seem.

The title of the TED Talk got my attention. “Do schools kill creativity?” It wasn’t exactly on topic, but it was too enticing to scroll past. The speaker was funny, brilliant and drove home a crushing but thought-provoking point: that our education systems tend to squelch our children’s creativity. They are set up to reward achievement in certain categories, ruling out infinite possibility in others.

He tells the story of a troubled young student named Gillian Lynne, who if not for the keen perception of a child psychologist, might never have been encouraged to dance and ultimately become the world class choreographer for “CATS” and “Phantom of the Opera.”

It took all of two seconds for me to recognize in myself some of the qualities Robinson pins on schools. Granted, it doesn’t sound as dire when it’s just little ol’ me, but sitting at home watching my twin 2-year-olds and my 4-year-old, I can make out a microcosm of what he’s talking about.

As a mom – and a human – my natural tendency is to plan. To structure. To schedule. That’s how I create order in the chaos. So with an hour to kill before dinner the other day, I got out some watercolor paints. 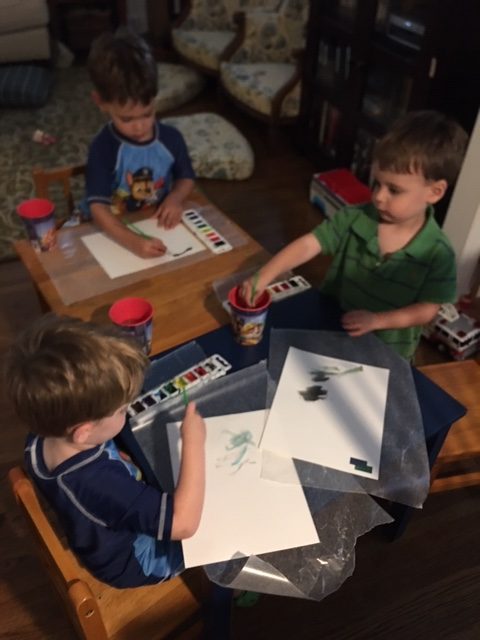 My three sons got right to work. Trouble was, they worked too fast. In a matter of five minutes, maybe less, they were done. Each boy had painted three or four pieces of paper and was holding his up before I’d come close to accounting for where to dry 10 sopping wet little masterpieces.

I couldn’t argue with their enthusiasm or their creativity; I watched my 4-year-old paint a “self-portrait” I’d only seen him draw to that point. But the most interesting part of the entire exercise happened while I was cleaning up art supplies.

The boys wandered into the living room, and following my oldest son Wade’s lead, started playing “barber shop.” Only after the scene had fully developed did it come into focus for me in the other room: they were reenacting our recent family outing to Super Cuts. Wade, Johnny and Wes took turns being barber and client. They used whatever “tools” they could find close by, a puzzle piece, a drink coaster, to work on each other’s hair. They scrounged up some of my husband’s readers and a pair of my sunglasses to use as goggles, so the excess “hair” wouldn’t get in their eyes. They even stacked two cushions onto one of our wing chairs to serve as a booster. 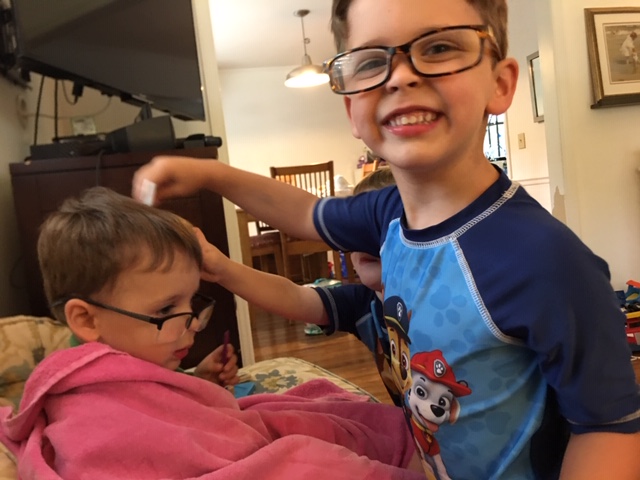 After watching for a bit, I couldn’t resist joining in the fun. I added a few tools to the mix – only the literal stuff for Mama, like an actual comb and hairbrush and a towel to use as a robe – but really the only job the boys wanted or needed me for was to stand in as an occasional salon client. My best move was to sit back and appreciate what they had come up with, all on their own.

I’m not smart enough to identify all the developmental advantages to what I was witnessing, the best of imaginative play. What I can tell you is that my boys were happier and more engaged playing barber shop than anything I had mapped out all day. They didn’t need me to navigate disagreements because there weren’t any. I didn’t have to account for lulls in the action, because they must have played for 20 or 30 minutes straight, eons in toddler time – and wanted to have another go at it after dinner. By all means!

I tried to remind myself of this little scene as the week played out, whether it was in the playroom or the backyard, and resist my usual temptation to mold and dictate. Rather than get annoyed at pajamas being pulled out of drawers in the middle of the afternoon, I laughed as they reappeared with pajama pants pulled over their heads and the tops got stretched out over their waists. 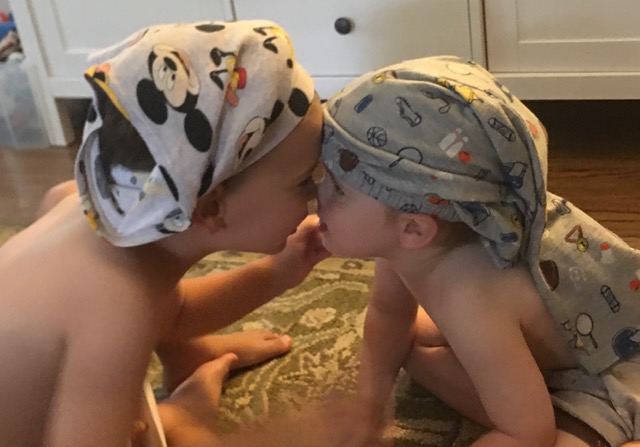 I laughed the afternoon Wade, my 4-year-old, got “Alexa” to play “A Spoon Full of Sugar” maybe a dozen times while leading his brothers in a conga line around his room. I didn’t even cover my head with a pillow at not-even-6 a.m. one morning, when all three were up playing “what animal can you change into” in the hallway outside our room. I had to smile at about the same time another morning when they woke my husband and me up by lining up toy trucks on either side of our bed.

In my former life as a sportswriter for a newspaper, I remember a colleague of mine telling me once that the best way to handle what you knew was going to be a really good story, was to stay the heck out of the way. Let the subject speak for itself. The same suddenly feels so true for parenting.

We put all this pressure on ourselves as parents, to do all the “right” things, to make the best choices to set our children up for success. We’re scared to death we might do something that could change the trajectory of their lives.

But maybe, just maybe, sometimes the best thing we can do as parents is…. nothing. At least until somebody grabs an actual pair of scissors.

From the Smarty Health Corner and Child & Family Development: Warning signs for Depression and Suicidal Ideation in Children and Teens

From the Charlotte Mecklenburg Library: We love book...

Invisible Fence® Brand: The fence that is saving...