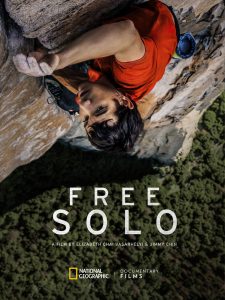 My entire family had been counting down the days until the film Free Solo was aired on the National Geographic Channel. We saw it on Sunday night (3/3) and I can’t even remember the last time every single one of us actually agreed on a movie. Somebody always has to make a concession. Not this time. Free Solo had us all literally hanging on by the edge of our seat, sometimes with our hands over our eyes, for the entire one hour and 37 minutes. This film is a must for all families of teenagers and older. I say “teenagers” because a) it’s officially rated PG13 and b) we don’t want our kids thinking this is something they should ever do {well at least I don’t want my crazy Plym twins to ever, ever take up free climbing:-}.

Free Solo is an award-winning documentary film featuring the lifelong quest of Alex Honnold as he attempts to free climb El Capitan, the world’s most famous rock. You read that right, “free climb” means Alex was going to do this with no ropes or any other means of climbing protection. El Capitan is a vertical rock of granite climbing 3,000 feet from base to summit. This is an INSANE goal for any human being because if you fail, you die. One slip, one cough, even one hiccup could bring you falling to your death at any given moment. It’s basically perfection or death.

This quote from the New York Times sums it up perfectly: “Alex Honnold’s Free Solo climb should be celebrated as one of the great athletic feats of any kind, ever.” He actually conquered El Capitan with his hands and feet and we watched the entire journey. It was horrifying and mesmerizing in one fell swoop.

A few things stood out to me after watching the film. First, Alex appeared to have no fear whatsoever, just calm resolve. He was completely fixated on this unbelievably high-risk goal of climbing a vertical rock wall with his bare hands. I’m thinking nobody is going to “beat” him on this accomplishment because anyone who tries and fails will die. Why on earth would anyone set such crazy goals?

Second, I can’t decide which had me obsessed more – the actual accomplishment of Alex himself or the incredible footage of the climb. It was absolutely breathtaking and I had to look away several times throughout the film because I was certain we were going to watch Alex plummet to his death.

I will say this, I wholeheartedly lift Alex Hommold up in pure praise, to have accomplished something of this magnitude. But I really hope he doesn’t continue his free climbing sport. I don’t think I can handle watching another one – I just might have heart failure!

Smarties, we are super lucky that this film is playing not only in a theater in the QC, but in an IMAX theater – this will be an incredible experience, I was wishing I had an IMAX theater rigged up in my house the entire time! Our very own AMC Carolina Pavilion 22 is featuring Free Solo in IMAX, get your tickets here. You can thank me later.

{Note: This film has been in Charlotte for a little while, it’s just new to our family and we loved it so much, we had to share!}

What to Wear to a Pool Party

The Skinny on the “Smarty Party” and a...