Every now and then, you’ll cross paths with someone that leaves an immediate and lasting impression on you. Muriel Hage is that person. We first met at an HSM Core class. I had been eavesdropping on her conversation about her new home build and chimed in with questions. When we saw each other again, we exchanged numbers and then set off on a lunch date at YAFO Kitchen. We’ve been meeting there pretty regularly since and our conversations are as delicious as the food. Read on to learn more about this intriguing and stunning Smarty Mom! 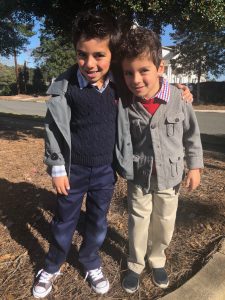 You’re French-Lebanese…..tell us a little more about your family heritage?

I am actually a little more than that. I was born in Lebanon. My mother is half French half Lebanese. My father is Lebanese. My grandmother is Argentinian. I was raised in Abu Dhabi in the United Arab Emirates (UAE). I am fully French educated. I speak French, Arabic, English and a little bit of Spanish. Yes, I am literally a melting pot – a fusion of nationalities and cultures.

How long did you live in Lebanon?

I only lived 5 years in Lebanon during my BA university years at the Saint Joseph French University. My parents escaped the Lebanese civil war in the 80s and relocated as expatriates to the UAE. Their goal was to offer us a better life in a safer place. My mother tells me incredible stories about their escape. They left Lebanon under the bombs by ship. She still has vivid images of herself, my younger sister and I taking refuge at the Beirut International Airport where my dad worked as a Station Manager with Air France, hiding underground in the baggage area to be safe from the bombs, breastfeeding my sister who was only a few months old. I was just 2 years old at the time. 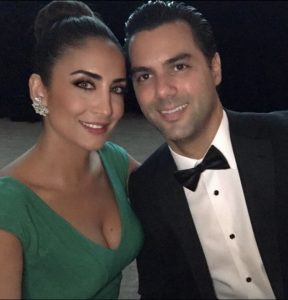 How did you meet your husband?

I met my husband Ziad while finishing my Master’s degree in Lebanon and working at the same time at a renowned international Advertising Agency named BBDO. Ziad initially saw me at a party and we started talking during the evening; we felt very attracted to each other. He wanted to see me again and I was a bit more shy. A mutual friend then set up a date for us to meet again at a local lounge in the heart of the Beirut nightlife. Not to sound too cheesy, it was love at first sight. There was a lot of chemistry in the air and butterflies in the stomach. We got engaged 6 months after. We have now been happily married for 12 years.

You left Lebanon during the 2006 July war. Tell us about it?

During the Summer of 2006, a war broke between Lebanon and Israel. My husband was due to take a flight to Chicago a week later in order to take the medical exam which would allow him to apply for a Neurosurgery residency program in the United States.

The Beirut International airport and runways were destroyed leaving us trapped; a lot of the infrastructure, including bridges, electrical and telephone poles were hit. The only thing you could hear were rocket launchers, missiles and fighter jets conducting air strikes. The sound of the air strikes still haunts me deeply.

Beirut was under siege: the only way to escape the country was by driving to the northern Syrian border. My husband was convinced that the only way to make it to the US on time for his exam was to risk his life and leave the country through the Syrian border despite the bombings. He found the only crazy cab driver left in Lebanon that agreed to drive him to Syria under the bombs. They were the only ones on the road! Once he reached the Lebanese-Syrian border, he took refuge in a church where he was greeted by the priest who had baptized him. Needless to say I was terrorized and I had no means of communicating with him. After spending a few nights there, he took a flight from Damascus Airport to Chicago via London.

Meanwhile, I was getting ready to leave with my parents and siblings on the French military ships that came to rescue all the French citizens. We were at sea for almost 3 days, reached Turkey and took a flight to Paris. We were all finally safe but the trauma was huge. The conflict ended on September 8, 2006 when Israel lifted its air and naval blockade of Lebanon.

What was it like when you first arrived in Chicago?

My husband passed the exam and was accepted at the Northwestern Memorial Hospital in Chicago for a Post-Doctoral Research Fellowship position in Neurosurgery. I arrived in Chicago during the month of November. I left my family, my friends and my home to come live with my soon to be husband (we were still engaged at that time) and support him in his decision to pursue a 7 year residency and career in Neurosurgery in the US. It was very overwhelming to me when I first arrived in Chicago. I didn’t know anyone and my English was poor. The brutal cold weather had already started. I was very nostalgic, missing my family and my warm Mediterranean home.

How long have you been in Charlotte? Where did you move from?

I have been living in Charlotte for almost 3 years now. We relocated from Chicago after 10 years, when my husband accepted a job offer as an Endovascular Neurosurgeon at Novant Health Presbyterian Medical Center. 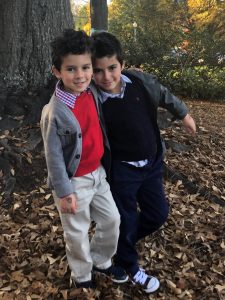 What’s it like raising two boys in Charlotte? What are some parenting challenges that are unique to your cultural experience? Do you have family nearby?

Most of our family members are spread out between Los Angeles, Lebanon, France and Canada. My boys were both born in Chicago. It became a challenge for me to raise my sons in a big city such as Chicago. I was always exploring the option of moving to a smaller city where the climate would allow us to spend countless hours outside enjoying the beautiful weather all year round. Charlotte was the perfect place: family oriented, welcoming, green and warm. I couldn’t have wished for a better city to raise my sons.

We did face some challenges, as my oldest son Christian only spoke French. He had spent 2 years already at the French Lycée in diverse Chicago, so relocating to a new American School was a bit difficult for him but his fast integration was impressive. He adapted very quickly and started mastering the English language in no time. Charlotte is our home now. Even though we miss our country and our roots, we feel blessed to be raising our family in such a beautiful place where the community has been nothing but supportive and welcoming.

What’s your experience been meeting new people in the QC?

Meeting new people in the QC has been absolutely amazing. Everyone has been fascinated to learn where we come from and hear our story. I love surrounding myself with genuine people who bring support, love and positive energy. And this is exactly what I was able to find in Charlotte.

What’s your favorite thing about the QC?

The weather is definitely number one on the list! The ability to enjoy and explore the outdoors with my family all year round. We love biking together as a family, along with our sweet puppy Zoe; so being able to still do that in the month of November is such a treat!

How will you spend the holidays?

At home surrounded by my family, counting our blessings and being grateful for everything that we have achieved. Indeed, we come a long way: arduous work and many sacrifices. This is what led us to where we are now. One day when the time is right, I will tell our story to our children, hoping they can understand the true values of life, and grasp how blessed they are. 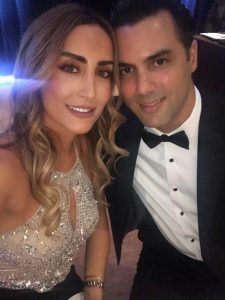 Favorite date night spot: Aria Tuscan Grill
Favorite place to shop for yourself: Lululemon (for my fitness mom gear), Ivy & Leo (for my stylish Summer outfits)
Favorite place to shop for your boys: GAP Kids
Favorite spot to meet a friend for lunch: Yafo Kitchen – I love that place and the chef has become a great friend.
Favorite phone app: Pinterest
Best place for a family vacation: The Sanctuary at Kiawah Island
Last book you’ve read: ‘You are a badass’ by Jen Sincero – How to stop doubting your greatness and start living an awesome life.

Smarty Days of Christmas Giveaway: FREE laundry from 2U Laundry

The Power of Theatre: The positive impact it...