When is the last time that you’ve had a really good scare? Since I’m not a huge fan of horror films, it’s been a while. I refuse to watch gory films where torture and misery are the primary reason for a film’s existence. I also get spooked very easily—I still haven’t talked myself into watching the remake of It no matter how many times my husband has tried! However, I absolutely adore John Krasinski and wasn’t going to let a little thing like nightmares keep me away from this film! My love of John Krasinski started with his portrayal of the affable Jim Halpert in the brilliant sitcom The Office and I must have watched the gut wrenching scene of Jim getting his heart broken by Pam at least a hundred times. Then nice guy Jim went and got all buff for the film 13 Hours to portray an ex-military security expert defending the US Embassy in Benghazi and there was just all that much more of him to love! Now Krasinski is not only starring in this film, but he also co-wrote and directed it. This man has some serious talent!

A Quiet Place begins cryptically on day 89 with the Abbot family slowly and deliberately walking through a deserted and looted pharmacy. Evelyn Abbot (Emily Blunt) is searching through prescription bottles to find medication for her sick eldest son Marcus (Noah Jupe). Their oldest daughter Regan (Millicent Simmonds) who uses a cochlear implant supervises her little brother Beau (Cade Woodward) who is intrigued by a toy rocket sitting on the top shelf. Their father Lee (Krasinski) searches the electronics section until it’s time to go. Evelyn uses sign language to indicate that it will be dark soon, and the family heads out. When they realize that Beau has taken the toy rocket, they freeze and sign to their son that the toy is too loud, carefully remove the batteries and leave it at the store. Seeing her brother so sad, Regan grabs the toy and hands it back to her brother who then sneaks the batteries behind her back. The family walks barefoot in a single file along a sandy path through the empty town littered with missing person flyers. As they cross a bridge, the silence is suddenly broken by the sound of the toy rocket. Evelyn is paralyzed with fear, Lee races towards his son and their nightmare world is revealed. 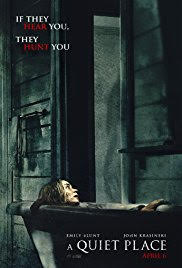 Fast forward to day 472, and Lee is working in the basement of the family farm. Newspaper clippings posted on the wall give hints to what has happened. Otherworldly predators have been decimating the population hunting only by sound. Upstairs, a very pregnant Evelyn checks her blood pressure and hangs a soft mobile above a crib. Now, it’s been a while since I’ve had a newborn, but I remember pretty clearly lots and lots of loud crying. I also remember lots of yelling (and maybe some swearing) during the births of our babies. I’m feeling a bit concerned for the future welfare of the Abbot family at this point and Evelyn’s impending due date is causing me an awful lot of anxiety as there will be definitely be noise in their near future.

In this era of big blockbusters with superheroes, car chases, explosions and epic fight scenes one thing remains constant—the noise. Movies these days are just so incredibly loud! It is so unbelievably refreshing to sit in a theater that is so very quiet. The film is not silent—in fact the lack of human noise only amplifies the sounds of nature that are always present. You hear the wind in the trees, the water flowing over rocks in the river and the thunderous sound of a spectacular waterfall. But these are the only sounds that are safe in this world.

John Krasinski is (of course!) fantastic as stoic family patriarch Lee. His real-life wife Emily Blunt brilliantly shows raw grit and strength as she fights to protect her family against seemingly insurmountable odds. While it’s billed as a horror film, A Quiet Place is really so much more. It’s the family dynamics which really take center stage as the Abbots try to navigate their new reality while simultaneously grieving their losses and preparing for the future. This well crafted story really does accurately portray the way parents will go to any lengths to protect the ones they love.

Can my teen watch it? There isn’t a whole lot of gore, but I did cover my eyes for one small scene involving a rusty nail. The story depicts a loving family who at times struggle to communicate with each other in their silent world. The father/daughter relationship is especially poignant to watch as both have to move past old wounds in order to move forward. While teens might really enjoy seeing the aliens (created by Industrial Light and Magic) this film ramps up slowly and takes time to get to the full alien onslaught. While I appreciated the slow lead-up which made me even more engaged in the story, I could see teens being impatient waiting for the “good stuff” to start. However, with a brisk run time of an hour and a half, even antsy teens will embrace the silence in order to experience the heart pounding thrills that lie ahead.