Home Entertainment It’s Oscar Time! Here is your Smarty Guide to the Best Picture Nominees.
EntertainmentThings To Do

It’s Oscar Time! Here is your Smarty Guide to the Best Picture Nominees.

It’s Oscar time! The Academy Awards have been around for 90 years—unbelievable. So many amazing films have been recognized over the years and now it’s time to add one more to the list. It’s been a tough year for Hollywood with the Me Too movement bringing to light so many wrongdoings in the industry. Hopefully next year we will see the results of changes that have been implemented. After last year’s envelope-gate debacle where the wrong Best Picture winner was announced almost nothing will come as a surprise this year. While there are some strong front runners for the top prizes, we won’t know anything for sure until the winners are announced this Sunday night! Here’s a review of the Best Picture contenders. Happy viewing! 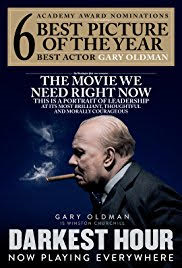 (Nominated for 6 Oscars)
If you are a fan of World War II history, have I got a movie for you. Darkest Hour depicts Winston Churchill’s early days as Prime Minister of the United Kingdom at a time when Hitler’s army was marching through Europe. The newly elected Churchill is quickly informed that 300,000 troops have been stranded on the beaches of Dunkirk and could be lost. He is also pressured to negotiate peace talks with Germany to prevent the Nazis from reaching their shores. Gary Oldman is completely unrecognizable as Churchill and does a masterful job of portraying this incredibly challenging time in the Prime Minister’s life. This is a dialogue heavy film that requires your full attention so I definitely don’t recommend watching it if you’re feeling a little sleepy. Still, it’s a great history lesson and fascinating to see the decision making process of this revered leader during the darkest of days. 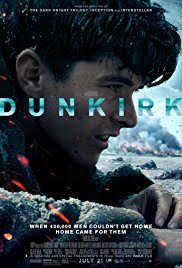 (Nominated for 8 Oscars)
I’m ashamed to admit that until this year I was unaware of the heroic events that took place in Dunkirk. Lucky for me, not one but two movies this year highlighted Britain’s amazing feat of courage saving so many soldiers from perishing at Dunkirk. While Darkest Hour depicts the planning behind the great evacuation, Dunkirk makes you experience it from several different perspectives. Writer and director Christopher Nolan is known for creating brilliant films that twist you into knots (like Memento, The Prestige and Inception) where you lose yourself in the plot as he bends time and reality effortlessly. He does the same here where you experience the horrors of war on all fronts. First you experience the soldiers’ struggle on the beach, where German planes fly overhead and drop bombs on the helpless young men (including pop star Harry Styles) with no means of escape. He then moves the action to sea where civilians (Mark Rylance) are headed to help evacuate soldiers. Finally, we experience the heroics of pilots (Tom Hardy) in the air as they shoot down enemy planes to protect their men. The film beautifully depicts the fog of war and the heroism of all involved during the action-packed sequences. Don’t be surprised if you get confused at times as the story is not told in a clear linear fashion. 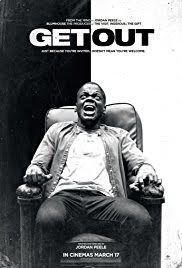 (Nominated for 4 Oscars)
A hybrid comedy/horror film, Get Out is one wild and crazy ride. It’s not your typical Best Picture flick and that’s a good thing. In the opening scene, a young black man is violently abducted as he walks along a nice suburban street late at night. We then meet Chris (brilliant newcomer Daniel Kaluuya), a photographer who is packing for a weekend getaway with girlfriend Rose (Allison Williams). Chris is hesitant to meet Rose’s parents as she hasn’t yet told them she’s dating a black man. Rose isn’t the slightest bit worried—her dad voted for Obama so it’ll be perfectly fine! During the trip, Chris gets a call from his friend Rod who warns him that it’s a bad idea to go visiting white folks. Undeterred, the pair arrive at the stunning suburban home and receive a warm welcome from Rose’s neurosurgeon dad Dean (Bradley Whitford) and hypno-therapist mom Missy (Catherine Keener). Chris also meets the hired help—groundskeeper Walter and housekeeper Georgina who just seem a little bit odd. It turns out there’s a valid reason why the pair is so strange and things only get stranger from that point on. Writer and director Jordan Peele has created a terrific taut thriller that highlights the very timely subject of race relations in a comedic yet terrifying way. 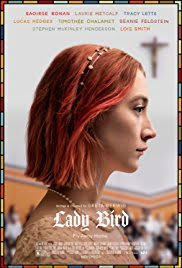 (Nominated for 5 Oscars)
In this fascinating semi-autobiographical story, writer/director Greta Gerwig shows us the tumultuous senior year of Christine, who calls herself Lady Bird (Saoirse Ronan). It’s 2003 and Lady Bird lives in Sacramento on the wrong side of the tracks with her mom Marion (Laurie Metcalf), out of work father Larry (Tracy Letts), older brother Miguel (Jordan Rodrigues) and his girlfriend. Lady Bird attends a Catholic school to spare her from the less than stellar neighborhood school. While the artistic Lady Bird aspires to attend a fancy liberal east coast school, her finances and grades don’t quite match up to that lofty goal. This leads to a long simmering feud between mother and daughter. First time director Gerwig completely captures the essence of what chaos exists in the mind of a teenager during this all important time of finishing high school and heading off to college. Lady Bird feels everything so deeply, from hearing the perfect song to finding the perfect dress, to falling in love and having her heart broken. She is self absorbed and selfish yet loving and caring—she’s a typical teenager finding moments of intense drama in a relatively mundane life. Saoirse Ronan is absolutely stunning as the flawed Lady Bird. It’s hard to imagine choosing a beautiful 24 year old raised in Ireland to play a tormented Sacramento teen, but she nailed it. 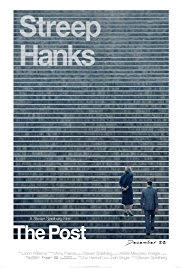 (Nominated for 2 Oscars)
All of the pieces are in place—you’ve got amazing director Steven Spielberg at the helm and two of America’s best actors in the lead roles. How can this picture possibly go wrong? Meryl Streep portrays Kay Graham, owner of the Washington Post during one of the company’s most tumultuous times in history. Kay has taken charge of the Post after the suicide of her husband Philip in hopes of keeping the paper in her family. The Post was originally owned by her father and he passed it along to her husband when he died. Kay relies heavily on editor Ben Bradlee (Tom Hanks) to manage all details of the paper. When secret documents are smuggled out of the Pentagon detailing government coverups regarding the Vietnam War, the New York Times is eager to publish the damning papers. When the Times is taken to court to prevent the document release, the Post has the opportunity to scoop the story. Kay must decide whether to risk a lawsuit and financial ruin by publishing the papers. The complex story is expertly told, but for some reason, the film is a bit flat. Still, it was compelling enough that I went right to the book store afterwards to buy Kay’s autobiography as she has led one fascinating life. And considering the current state of journalism in this country, The Post is definitely a story worth telling. 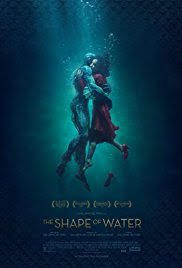 (Nominated for 13 Oscars)
Set in the early 1960’s, Elisa (Sally Hawkins) works as a cleaning woman in a top secret government laboratory. Elisa is mute, but able to communicate using sign language with her friend and co-worker Zelda (the always delightful Octavia Spencer). One night while cleaning they meet Colonel Strickland (Michael Shannon) a cold bully of a man who has brought a new asset to the facility. The asset is a fish/swamp creature that the Colonel has caught in the Amazon. Although the creature bites off two of Strickland’s fingers in gory fashion, Elisa is intrigued by the creature and decides to befriend it (say what?). Unafraid of losing body parts, Elisa brings the creature hard boiled eggs, then music, and soon Elisa is teaching the creature some words in sign language. This friendship quickly becomes a love affair (again—say what?) and Elisa decides to free her beloved fish man from the bad guys. I don’t care how many awards have been lavished on this beautifully filmed story, it still leaves me confused and a bit creeped out. 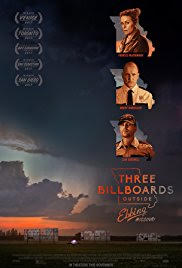 (Nominated for 7 Oscars)
What starts off as a brilliant concept turns dark very quickly as we visit Ebbing, Missouri. There we meet Mildred (Frances McDormand), a completely broken shell of a human being. Mildred is barely functioning months after the horrific murder of her daughter. Furious at the lack of progress in the case, Mildred takes a bold step by purchasing three billboards that criticize town sheriff Chief Willoughby (Woody Harrelson) for not doing enough to catch the killer. Her actions anger many townspeople, including Officer Dixon, a morally questionable guy who is loyal to the Chief. This initially clever billboard idea spirals into something much more damaging and nobody will ever be the same as a result. While the acting is absolutely fantastic, the actions of Mildred, Dixon and Willoughby become so over the top that you know they can’t possibly hope to find redemption. One flashback scene between Mildred and her daughter literally took my breath away as one of my worst nightmares. Without any hope for these characters, it’s hard to keep watching. The end result is that I would never, ever want to visit this extremely depressing town again.

Call Me By Your Name 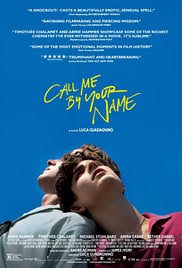 (Nominated for 4 Oscars)
Based on a novel by Andre Aciman, this is the story of 17 year old Elio (Timothee Chalamet), who lives in Northern Italy with his parents in the early ‘80s. Elio’s father is a professor of archaeology and each summer a graduate student arrives to help with research. When 24 year old American Oliver (Armie Hammer) arrives, Elio quickly becomes smitten with him. The story details the summer of Elio’s first love set in the beautiful Italian countryside. Unfortunately, because this was a limited release, I’ve only managed to see the previews of this film so far. I’m way too old to go to a movie at 10pm and the only other showtimes always happen during carpool! Sadly I’m going to have to wait until this one comes out on demand before I actually get to see it. 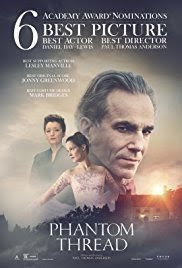 (Nominated for 6 Oscars)
In 1950’s London, Reynolds Woodcock (Daniel Day-Lewis) is an acclaimed dressmaker. With the help of his sister Cyril (Lesley Manville) the pair dress the elite—from royalty to Hollywood. Reynolds enjoys the company of many women until he meets Alma (Vicky Krieps) who becomes his lover and muse. Ooh la la! Unfortunately, this film also fit into the limited release category and while I hear Daniel Day Lewis is outstanding in what is reported to be his final acting role, I was unable to see it! Again, if I can’t see it before carpool and my ridiculously early bed time, I’m going to have to see it at home! Shame on me!

Fitness Friday: A week of FREE classes at CycleBar Waverly

Will this be your family on Thanksgiving? Thx,...

5 Reasons We Did Swim Team

Looking to ‘pay it forward’ this holiday season?...