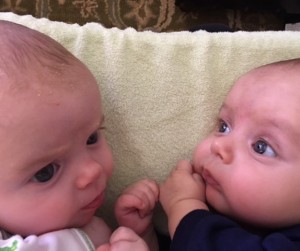 After spending the better part of two years breastfeeding – 6 ½ months with my now 2-year-old son Wade and five months with my twin sons Johnny and Wes – I’m weaning. With one week to go and the end in sight, I can say it: I’m ready to dropkick breastfeeding to the curb!

My husband gets credit for the “bye, bye boobies” headline, as well as the runner up: “Aloha,breastfeeding!” He knows it’s been harder for me this go-around and how hard it is in general. I tandem feed my twins, which means I breastfeed them at the same time. It’s the only way I have time to do anything else, and it also makes me a “breastfeeding beast” as my OB-gyn affectionately coined me.

Look, I’m all for breastfeeding. It’s great for your baby’s health and well-being and it’s something only you, as a mother, can give your baby, which is priceless. I’m damned proud that I breastfed all three of mine. And if I had to do it all over again, I’d do the exact…same…thing.

But in this blog, I’m acknowledging the bear that breastfeeding is and paying my respect to all the women who do it or have done it. In the process, I felt like I can pass on a little wisdom to the gals who are preparing to go down this path because I can tell you now, you’re going to need it. Breastfeeding seems like it should be the most natural thing in the world. It isn’t. It’s one of the hardest things I’ve ever done.

I’ve run two marathons. They’re over in four or five hours. I’ve covered a Major League Baseball team in the pressure-cooker of a 24-hour news cycle and a 162-game season. You get off days.

The sleep deprivation breastfeeding requires alone can bring you to your knees. You’re up every three hours to breastfeed or pump for weeks on end, and nobody else can do it for you. I asked a friend who’s an officer in the Navy who gets more sleep, a soldier at war or a nursing mother and he said, without hesitation, a soldier at war. They get pulled back from the line on occasion, for R and R.

OK, that last one isn’t a fair comparison. Breastfeeding doesn’t put your life at risk, but your baby’s livelihood is certainly on the line. And because you can’t see or readily quantify what your baby is taking in, you are going to panic at times and wonder if you’re starving your own child. But if somebody else suggests your baby is hungry, it’s going to hurt your feelings. Get ready for the emotional roller coaster of your life.

There are times when breastfeeding is physically grueling too. I had my first blocked duct with my son Wade. They’re a little weird and gross, but there are ways – quite literally – to work them out. After I had two little latches to focus on (or more accurately, lose focus on) I got my first milk blebs, which are blisters on your nipple, and as wickedly painful as they sound.

As a result of my second bout with milk blebs, I got my first case of mastitis, the dreaded breast infection. The trouble with mastitis, in addition to the flu-like symptoms and the fever, is there’s no time to rest, and the best way out of it, and every other breastfeeding issue, as you’ll hear over and over, is to keep nursing.

So when you’re in the throes of a “keep nursing” moment, be it mental, physical or hormonal (!!), I hope it’ll help to remember these 10 things…. and most importantly to keep your head up. You are a breastfeeding badass. You will get through it!

1. Be patient if you and your baby struggle to learn how to latch and don’t be afraid to supplement with formula, if need be, in the meantime. After a week of non-stop feeding and pumping sessions, Wade drank a measly 4 milliliters off my breast in front of a lactation consultant. Based on that number, another consultant told me I should consider other feeding options. But after all the time and effort I’d put in, I wasn’t ready to quit. A week later, Wade drank 114 milliliters in front of that first lactation consultant, and she was hugging and high-fiving me by the end. Wade had needed a little formula in the meantime, but he always preferred my milk and in no time at all he was strictly breastfeeding.

2. Find a lactation consultant you trust. You’ll meet plenty in the hospital, and in the clinic, if and when you go back. You won’t click with all of them. Some take it too seriously. Some don’t get it when you have got to find a way to get an extra hour’s sleep here or there. Some grab your boob one too many times to demonstrate feeding your child a “breast sandwich.” But you’re going to find one or two who speak your language and when you do, lean on them to the end.

3. Rent a scale if you need to. Weighing your baby before and after feedings is an easy way to see how much milk your baby is getting, and it will ease your mind instantly. I rented one for a week with Wade, and less than two days in, I had my confidence. By the time I had twins, I took them to the clinic twice for weigh-ins and I was good to go. 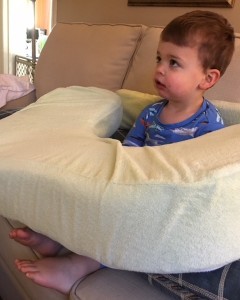 4. Some practical matters: boppy pillows have the cutest covers but get a Brest Friend pillow. It gives you and your babies the best support. For twin moms, the Brest friend comes in extra large that makes tandem feeding easy. Twin moms, rent a hospital grade pump. For milk blebs, get a prescription for Dr. Jack Newman’s All-Purpose Nipple Ointment. When you’re engorged or in pain and your milk supply is not an issue, use cabbage leaves to sooth your breasts. Don’t ask me why it works but it does.

5. You’re going to need your partner’s support. No way could I have breastfed all three of my sons without my husband behind me every step of the way. He’s the one who’s going to cheer you up when everybody else sees the grumpy mess you are and is ready for you to quit. He’s the one who’ll tell you you’re doing fine when you don’t know up from down. And he’s going to be there to moo at you when you’re chained to a pump and need a reason to smile.

6. Find another cheerleader and confident. Your husband is going to get tired of hearing about it too, so you need somebody you can call when you need to have a good cry, and you will. For me it was my friend Anne, who had breastfed her three children. She never let my calls go to voicemail, and she always had a sympathetic ear and encouraging word. I understand now why people have breastfeeding support groups. She was mine.

7. Your mom, mother-in-law, aunt, grandmother, or somebody from the breastfeeding-is-for-hippies generation might not get your decision to breastfeed at first, but she will. My mom raised five children on bottle-feeding and we turned out fine. I get it. She wanted the chance to bottle feed her grandbabies and who can blame her? Once she saw the time, effort and love I put into breastfeeding, she came around and yours will too. If you’re lucky like I am, she’ll clean your pump parts and change diapers, and in return, whenever the opportunity to bottle feed arises, whether it’s supplementing with formula or feeding pumped milk, let her do it.

8. If you get mastitis, you will survive. At the first signs of it (www. kellymom.com is a great place to read about symptoms and everything else breastfeeding-related) call your doctor and start an antibiotic. My fever got as high as 103 and it scared me like crazy, but within a couple of hours it started to drop and by the next day, the fever was gone.

9. Take your time weaning, if you can. I was advised to drop one feeding and/or pumping a week, and that’s worked so well. I think it makes the transition easier on both mama and the baby.

10. Give breastfeeding everything you absolutely can. Then when you know deep down it’s time to stop, stop, with no regrets. The American Academy of Pediatrics recommends breastfeeding for one year. That’s a long time. Things come up, whether it’s going back to work, getting pregnant again, whatever. There’s only one voice that can tell you when it’s time to stop, and it’s yours. The first time I stopped was because I was trying to get pregnant again. The last time, it came to me one morning when my 2-year-old leaned against me snuggling in our bed and I winced in pain.

Now with a week to go, I can hug all three of my babies with no hesitation. And I can smile. We did it! Now it’s on to the next challenge of motherhood.

From the Charlotte Mecklenburg Library: Get involved and change lives with Active Reading

From the Smarty Health Corner and CEENTA: How...

A poverty simulation that will motivate you to...

great blog, tips are great for first time moms!
Glad and am honored to be, and will always be your bosom buddy 🙂