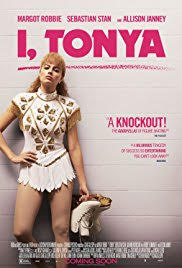 In honor of the Olympic Winter Games, I felt compelled to spend even more of my free time watching competitive figure skating. As I’ve probably mentioned on more than one occasion, I love the Olympics. I was lucky enough during a semester abroad to finagle tickets to the 1992 Men’s Figure Skating Finals in Albertville, France and it was an amazing experience. I watched Paul Wylie (now a Charlotte resident) win the silver medal with a phenomenal routine and have been fascinated with skating ever since. But who knew that two years later this beautiful competition would become a blood sport?

Full disclosure—I’m Team Nancy. It still ticks me off that people mocked the poor gal for sobbing “Why me?” over and over after the attack. Call me crazy, but if you’ve dedicated your entire life to being an Olympian and weeks before the competition some big nut job attacks you with a lead pipe and bashes your landing leg you might wail and moan too! Putting that aside, I was curious to hear Tonya’s perspective on the whole nightmare and I hoped to gain some insight into her frame of mind.

Right off the bat (or lead pipe as the case may be) a disclaimer is put on screen that the film is “based on irony-free, wildly contradictory, totally true interviews with Tonya Harding and Jeff Gillooly.” You know instantly that you will leave the theater without knowing the absolute truth—and that’s ok. Instead, you’ll spend the next two hours living in Tonya’s turbulent and troubled world as she and her ex-husband recount it.

We first meet Tonya as a young child who is itching to skate. Her terrifying and crass mother LaVona (fearlessly portrayed by Allison Janney) rudely insists that her daughter receive lessons and Tonya quickly proves to be a skilled skater. LaVona is relentless with Tonya and constantly pushes her to toughen up. We then fast forward to a teenage Tonya (Margot Robbie) who is desperate to escape her abusive mother and falls for an equally abusive Jeff Gillooly (Sebastian Stan). At only 20 years old, Tonya marries Jeff much to her mother’s dismay. Tonya’s greatest accomplishment happens the following year when she lands a triple axel at the 1991 Nationals. This is a turning point for both Tonya and Jeff—she becomes even more dedicated to winning and he becomes jealous of her success and even more abusive. The pair eventually split up after the Albertville Olympics where Tonya places fourth behind bronze medal winner Kerrigan. Alone and defeated, Tonya begins waiting tables after her Olympic loss. However, this is also the year that the Winter and Summer Olympics began alternating so in only two years they will be held again instead of the usual four. Tonya reunites with her coach and ex Jeff since she doesn’t think she can win without his help. Bad idea!

Here’s where each story really veers off into completely different realities of what actually happened. Did Tonya only consent to a hoax death threat against Nancy to scare her? Was Jeff only a part of the death threat idea but not the knee whacking? Was the attack actually planned by Jeff’s friend Shawn Eckardt (Paul Walter Hauser)? Shawn, a slovenly guy who lived in his mom’s basement served as Tonya’s bodyguard but also imagined himself an espionage expert. What role did he play in plotting the crime? With three disparate and unreliable stories at play the truth only gets more muddled.

Instead of historical accuracy, the film actually seeks to explore the story of class in society. Figure skating is a beautiful and graceful sport where skaters act and dress appropriately. Judges expect that and seek those qualities in their champions. Tonya felt like “trailer trash” and assumed that her garish homemade costumes, foul temper and potty mouth kept her from winning. She knew that she didn’t embody the judge’s vision of an ideal skater and wanted to fight her way to the top regardless. Tonya skated with a huge chip on her shoulder as an outcast who didn’t fit in. Of course on the flip side Nancy Kerrigan is portrayed as a Disney princess who was handed everything but in reality she came from a blue-collar background as well.

This so-crazy-you-can’t-make-it-up story really does present a unique and fascinating look at the world of figure skating according to one admittedly underprivileged and victimized athlete. Margot Robbie is mesmerizing as volatile outsider Tonya and if Allison Janney didn’t have such stiff competition this year she’d be guaranteed an Oscar for her portrayal of LaVona. The screenplay does a fantastic job of weaving in and out of each character’s story and you will find yourself completely engrossed in this crazy, sad, violent, twisted tale as long as you can get past the barrage of never ending foul language.

Regardless of the undisputed hardships that Tonya faced, only she can take responsibility for her life and decisions. No matter how many tears she sheds or how many excuses she makes, I will always remain firmly on the side of Team Nancy.

It’s a Great Time to Buy a Home

This movie made me desperate to have back the 2 hours that I used to watch it not to mention the $15 ticket price. It ranked at the top of a very short list of worst movies I have ever watched. And yes, the use of “F*&K” was insane.