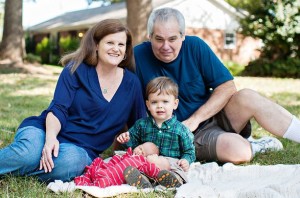 Smarties, we are absolutely THRILLED to welcome Carroll Rogers Walton to the Smarty team. Carroll is a mom to three adorable boys, an almost two-year-old and newborn twins (ummmm, yea, she’s got a little goin’ on ;-)). Carroll is a former sportswriter, which makes her not only the best “boy mom” in all the land, but totally qualified to be a stellar addition to our pink-n-green tribe.

Carroll is the real deal – she’s genuine, funny, articulate, and has some amazing stories. Get to know her better right now and be on the lookout for her unique outlook on #momlife in the future!

Tell us a little bit about your background in journalism.

I was a sportswriter for 22 years – five at the Macon (Ga) Telegraph and 17 at the Atlanta Journal-Constitution. I started out covering high school sports, then Georgia Tech football and basketball, then the Atlanta Braves, a progression I made at both newspapers. About the time I was ready to move back to Charlotte and get married, I was working on a book called “Ballplayer” with Chipper Jones, the former Braves third baseman, and that has allowed me the flexibility to stay home with my boys for a while. 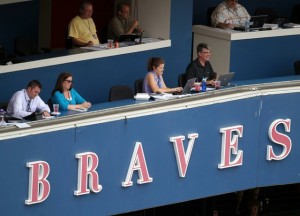 What was it like being one of the only women in the “man’s world” of professional sports?

Most of the time I liked it. I grew up with three brothers, playing outside with the boys in the neighborhood, and loving sports, so in a lot of ways it was natural to me. There were some instances, especially in the mid-90s, where being in a locker room was an uncomfortable place to be, but I had it so much easier than the female baseball writers who came before me. Luckily for me, the Braves were a class organization and made sure their players were respectful of women. If they weren’t, they generally didn’t stick around long. I can count on three fingers the number of times I felt singled out and wanted to run screaming. (Thankfully I held it together!) I liked being different from other baseball writers, and I didn’t mind having to work a little harder to earn players’ respect. I approached the clubhouse like the seventh grade: get in good with the cool guys and you’ll be all right. Luckily for me, the Braves’ cool guys – Greg Maddux, Tom Glavine, John Smoltz, and Chipper Jones – also happened to be nice guys. Once I felt like they had my back, I knew I was all right. 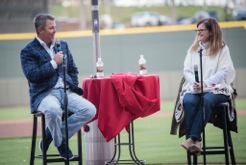 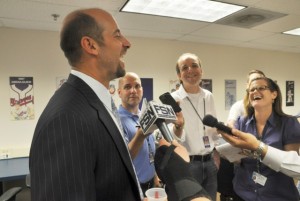 Do you see yourself as someone who broke barriers?

In my own little world, yes. I was the first female Braves beat writer. There were women in TV and in part-time writing roles but I was the first (and only to this point) beat writer to cover the team full-time, which means you cover most of the 162 games and you are responsible for the news of the team. I did it for the AJC for three years from 1999-2001 and then for another eight years as the backup before I left the paper in 2014.

You’re a Charlotte native. What do you love most about your hometown? What makes this city unique?

I was actually born in Dallas, TX but my Dad grew up here and moved our family back when I was 4 so I’m almost a native. I love the friendliness of people here and how pretty and clean a place it is. I love how Charlotte can feel like a big city and a small town all at the same time. It does crack me up when people talk about how bad the traffic is here. It’s nothing compared to Atlanta!

How did you and your husband meet?

Through my best friend from Duke, Liz. Her husband Andy worked with Gus at Graybar Electric in Raleigh, and they got to be really good friends. Gus and I had heard each other’s names for years – the name “Gus” definitely stood out – but we’d never met. He lived in Raleigh, Washington, then San Diego while I was in Georgia. In the summer of 2006, I was in the mountains on a girls’ trip with Liz, and we were literally in our pajamas, scrapbooking – about the last place I expected to stumble upon the love of my life. She was scrapbooking a trip she and Andy had taken to San Diego to visit Gus. I saw his picture for the first time, and I was like “That is Gus?!” He was super cute. She’d been holding out on me! Andy came up to the mountains that weekend and we all went out to play golf. Liz quit after nine holes, so I spent the back nine riding in the cart with Andy, grilling him about Gus. It took Gus three weeks – I learned that he does things in his own time – before he looked up my work e-mail on the internet and reached out. He wrote that he was a friend of Andy and Liz and that it was a shame we’d never met. That was the beginning of a life-changing relationship! 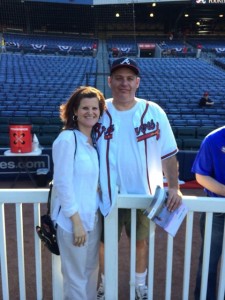 Carroll with Gus right after he proposed

You’re pretty open about your struggles with fertility. Tell us a little more about your journey to motherhood.

Well, this is something I could spent four hours and a bottle of wine talking about, but in a nutshell, I struggled because I waited until my 40s to get married. I’d always wanted a family but it took me a while to meet Gus and to pin him down! We dated long distance for eight years before we got married. My sister is an OB-GYN here in Charlotte, and she always gave it to me straight. Just because celebrities had babies into their 40s didn’t mean I could. I knew I wasn’t going to get pregnant after age 42 without significant help, so I got significant help. We went through IVF four times and walked away with three children. I know I’m one of the truly lucky ones. I never thought I’d have the chance to be a mom – I literally mourned the idea when I was still single in my late 30s – and now I have three boys. Nobody is as surprised and as grateful as I am. 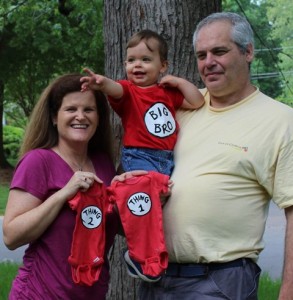 How has life changed since having twins?

Well, my house is a mess, I’m lucky to wash my hair three times a week, and I hardly know who is who on Duke’s basketball team this year. Ha! I used to exercise five times a week – even when I was pregnant – and right now breastfeeding is my exercise. I’m living a new kind of busy. But thankfully, my life is still sane and I’ve been able to be a human being to my boys because I have a ton of help. My mom and my sister both moved into my neighborhood so they could help me with the twins. And thanks to my sister’s generosity, we were able to get a night nurse several nights a week for the first three months which was an absolute lifesaver. I also have a part-time nanny who helps me look after the boys. It’s still a big job with both of us there! And my husband is a real champ. He is a hands-on father who shares in parenting duty when he’s not at work.

How’s it stayed the same?

I still find my way to Starbucks almost every day; it’s a serious addiction! I try to keep my older son Wade on his same routine as much as possible and make 1-on-1 time with him daily. And I write at night to keep up my freelance obligations and to remind myself of who I was before all the boys showed up! Slowly but surely I’m returning to a sense of normalcy, just a new version of it.

We are SO excited to have you on our Smarty team. Tell us a little bit about your voice on CSP and what you hope to bring readers.

Being so late to motherhood gives me a unique perspective and some life experience to draw on that some younger moms might not have. I hope to bring that sense of gratitude and perspective to my writing. But really, if I’ve learned anything over the past two years, it’s that moms experience so many of the same things regardless of age. That’s been reassuring to a gal who has to get to the hair salon (ahem) a little more often than some of my younger mom friends!

Favorite mom gear? Lately it’s the miracle blanket. I’m terrible at swaddling and this blanket is the difference right now between our babies sleeping through the night or not….

Favorite twin gear? City Select double stroller. It was recommended to me by another twin mom for its versatility, and it has a running board so Wade can jump on the back and ride like a big boy. 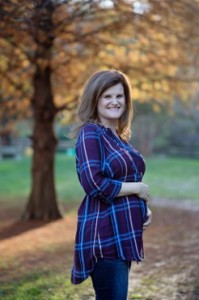 Best date night? I’m pretty easy. Give me a good movie, a steak and red wine or maybe Mexican and a margarita with my husband and I’m good!

Best part of being a mom of all boys? I’m set on hand-me-down clothes and toy trucks! It’ll be a natural fit for me if they grow up loving sports. And I’m hoping I get to avoid a lot of the drama girls go through in middle school.

Last book read? It’s kind of sad to say but “Healthy Sleep Habits, Happy Child,” and it has saved me. Trying to figure out sleep patterns and schedules is tough and this book has guided me through the wilderness!

Finish this sentence: I hope my boys…grow up to be respectful, kind, smart, and loving boys and know beyond everything else, how much I love them. Part of our bedtime routine with Wade is dancing to Anne Murray’s “Could I Have This Dance.” I used to dream about dancing to that song at my wedding. Now my dream is to dance to it with each of my sons at their weddings. Of course, Wade has already heard it so much he might despite it by then! 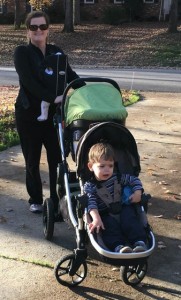 Carroll with her tribe

Fitness Friday: Top 5 Reasons this Teenager is Addicted to CycleBar

From the Smarty Education Corner and CCDS: Prepare...

Meals With A Mission

Smarty picks for the best planners to keep...