Home Food Booooo! When Halloween isn’t so fun
FoodHealthParentingSmarty Health CornerThings To Do

I’m learning, as a parent, that at a certain age, Halloween becomes frightening in most households. I’m not quite sure what age that is, but at some point, the Great Pumpkin Charlie Brown gives way to skeleton bones buried just above ground level and “Beware of the Zombie” placards in the front yard. I have a five-and-a-half-year-old and a three-and-a-half-year-old, and at Party City this past weekend, the younger would only look at things that screeched and/or had fangs. Preferably, screeched and had fangs. Halloween has officially become scary in our household. 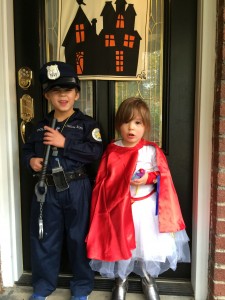 But, truth be told, Halloween has been terrifying for me almost from the moment I became a parent. At nine weeks, my son – who is now in Kindergarten – developed a shell of eczema that covered his entire body. As a nursing mother, I tried everything – take out dairy and soy and wheat, then slowly add it back into my diet when seemingly nothing cleared up his skin. When he was a year old, bloodwork confirmed the eczema was caused by a tree nut and peanut allergy, as well as a host of seasonal allergies. Every year since then, his bloodwork has shown a steady increase in the numbers that correlate to the severity of the allergy. Experts at hospitals like Johns Hopkins, who are known for their cutting-edge food allergy research, have confirmed that the likelihood of my little guy having a life-threatening reaction after ingesting a nut is greater than 95%. I suppose, in some ways, we are lucky – my husband and I have never witnessed our son go into anaphylaxis. We’ve never had to administer an epi pen or rush him to the hospital. Because he was so young when the allergy was discovered, we never exposed him – accidentally or on purpose – to a peanut, walnut, cashew, almond, pistachio, pecan, chestnut, pine nut in any form. So far, we have kept him…safe. But as he grows older, enters school, makes his own friends, and develops his own likes and dislikes, I realize more and more that his allergy is expanding out of my control.

Holidays pose a special challenge – specifically, Halloween. In a world where most holidays mean an onslaught of candy and treats, I worry about every little nibble and nugget that comes into contact with my son. And even if it’s not candy, the fact that our society trends toward “healthy” treats is even worse for us – in many cases, “healthy” means nuts are included, in the form of granola bars, baked goods and even smoothies (our little guy can’t have almond milk, or even coconut water). I fear Halloween functions and school parties. I fear trick-or-treating. I fear the well-meaning person who offers him a Halloween treat, I fear that my son will forget to ask if the treat has nuts in it, I fear that on days like Halloween, my son realizes he is different – glaringly, painfully, life-threateningly different.

As parents, my husband and I work really hard to make sure our son feels less different. But this, too, is a struggle. In our son’s case, realizing and acknowledging that he is different could very likely save his life. So as much as we want him to enjoy Halloween festivities like his friends do, we make sure he realizes that we all have to be vigilant – we have to read every ingredient, we have to say no to every homemade treat, and we have to be aware of the signs of an allergic reaction should he accidently eat a nut. But it is one of my least favorite parenting moments to have to say “no,” “nope,” “not that one either” to a five-year-old after he unloads a pillow case full of candy on the kitchen floor. Because we have been living with his allergies for years, our son is relatively accepting of the fact that he can’t have most candy, but that doesn’t mean we don’t have our share of Halloween meltdowns when the candy that has or potentially could have nuts (and it’s A LOT of what’s out there) gets collected for the Switch Witch. You read that right: the Switch Witch: 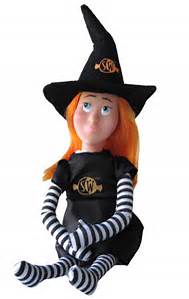 Do you know this red haired relative of the Elf on the Shelf?? Apparently, she and her witchy squad are fueled by candy that kids like mine (and yours…if you’re not smart enough to turn around and RUN LIKE HELL when you see her sitting on the shelf at Target) collect at Halloween. Their brooms and cauldrons and pointy hats don’t work unless they have chocolatey, gummy, nutty fuel from Halloween night. On Halloween night, my kids put all their candy (save a few carefully chosen pieces) outside their bedroom doors, and the Switch squad takes it away, leaving a large, not-from-the-dollar-bin toy in its place. Clever – and no doubt helpful if you are managing a food allergy and need a way to soften the blow of candy confiscation – but also so much work, especially the month before the Elf makes his appearance at creative places around our house. Confession time: I didn’t actually read the book that comes with the Switch Witch until I started hiding her. In the book, she is a stationary witch – obviously, because she has no candy to fuel her. So between the witch and the elf, I hide a doll around my house for the three months between Halloween and Christmas. Should you get a Switch Witch, heed my warning: park her on your mantle for the month of October and put all your energy into Pinteresting creative places to hide your Elf on the Shelf.

And thanks to organizations like F.A.R.E. (Food Allergy Research and Education) and their Teal Pumpkin Project, F.A.R.E.’s mission to “make the joy of trick-or-treating available to as many kids as possible” is becoming a reality. If you see a teal pumpkin on a porch this Halloween, you can be certain a non-food treat is being given out, so a child with ANY kind of food allergy has something fun to take home on Halloween night. Food allergies are becoming mainstream in other areas of life, and it is my hope that through awareness, and acceptance, and the Teal Pumpkin Project and even the Switch Witch, children with food allergies can be included in one of the most enjoyable holidays of childhood, even if it’s one of the scariest for their parents and caregivers.

Smarty Review: Children’s Theatre of Charlotte gr-ACED it with ‘Grace for President’

Smarty FLASH Giveaway: Family 4-Pack to the NASCAR Hall of Fame’s Hall-O-Ween at the Hall

Meeting invite: Pick up the kiddos