CSP team note: This giveaway is held through Smarty Kimmery’s Web site http://www.kimmerymartin.com, where she posts book reviews and author interviews. Make sure to subscribe to her newsletter to get all the latest (subscribe at the bottom of her web site). Thanks, Kimmery, for sharing the giveaway with CSP readers!

You gotta love our civil, logical political system. Wait, no! I have that exactly backwards. But here’s an unanticipated benefit to our national dysfunction: it provides for some interesting behind-the-scenes reading. Exhibit A: Jennifer Close’s fresh, smart, realistic portrayal of two young Washington couples is a must read for West Wing junkies. In the aftermath of Obama’s first campaign, newlywed Beth is reluctantly uprooted to D.C., where her husband lands an administration job. But when Beth and Matt meet a charismatic Texan couple with intense political aspirations, everything is suddenly at risk: their marriage, their careers, their friendships. 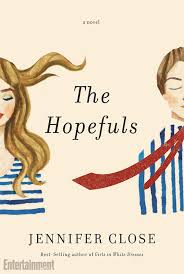 I recently had the pleasure of interviewing Jennifer Close about her book, one of the buzziest new novels of the summer. If you’d like a FREE copy from the publisher, Penguin Random House, please visit www.kimmerymartin.com and leave a comment at the bottom of the review of The Hopefuls. Three winners will be chosen on July 30th.

KM—Like your protagonist, you moved from New York City to Washington, D.C. resulting in an unsought exposure to the world of politics. How did your characters emerge in your imagination, and was there any concern that your acquaintances might attribute them to real people? Have you had any feedback from politicians?

JC—When my first book—Girls in White Dresses— came out, everyone assumed (as they often do about debut novelists) that it was based on me. And like most debut novelists, I had to reassure everyone: it’s fiction, it’s fiction. Because the beginning of this novel mirrored my own experience —the switch from New York to D.C., the proximity to a political campaign—I knew the same questions would come up, but the temptation to write this story was too great to ignore. I thought people would find the intricacies and backstories of D.C. to be interesting, and there’s an inherent drama in political campaigns that was too good to pass up. The novel is inspired by my move to DC, but completely fictionalized. I haven’t yet run across anyone who thinks it was about them.

I was able to translate some of the experience of D.C. into the story: the scene where Beth lists the things she hates about the city—the acronyms for where you work (for the D.O.D, for POTUS, I’m an LA), the carpeted Metro, the lanyard-wearing, baby-faced, ultra-earnest staffers, the helicopters and the humidity—that scene was one of the first I wrote, and it seems to have really struck a chord.

KM—Speaking of that, many reviewers have commented on your realistic portrayal of Washington: it almost functions as a fifth character in the book, with its own quirks and dynamics and idiosyncrasies. How does living in D.C. compare to other cities now that you’ve been there awhile?

JC—I loved New York–there’s a million great things about it, but there’s also so much about living there that’s hard. It took me a little while to adjust to DC, but I’ve learned to appreciate a lot about it. Here I have a great group of nonpolitical girlfriends, and the city itself is quieter, easier to live in. It’s more like a town. And it’s also become much more vibrant place, with new restaurants and cool places to go. I can honestly say that I like it here now!

KM—The character of Beth seems to function as a foil to the busier lives of the other characters, allowing the reader a second-hand behind-the-scenes glimpse of political and marital intrigue. Why did you write from her perspective? What is your perception of her?

JC—The original drafts ofThe Hopefuls were written in the third person. But I realized as time went on that having a political outsider tell the story in the first person was funnier and edgier. Beth has a purposeful passivity about her—she’s a contrast to how driven the other characters are. And she’s able to describe the actions of multiple other characters without me having to dive too deep into the weeds of their day-to-day experiences.

KM—Matt, Beth’s husband, and Jimmy, their friend, have a dichotomous relationship in which they both have strengths necessary for political survival. But in your portrayal, Jimmy’s charisma is rewarded with more success than Matt’s competence (which is especially interesting in this political cycle.) How intentional was this message?

JC—Well, I wrote the novel quite awhile ago—and was somewhat inspired by the Obama/Hillary face-off—so it isn’t a direct commentary on this election. But I do think it’s a very interesting question, how the skills needed to run for office are often very different from the skills needed to serve in office. We get swept up in someone’s charisma and speaking abilities. And this was so frustrating and sad for Matt, in the novel, because he was driven and intelligent and thoughtful when it came to policy, but Jimmy just outshone him with his big personality.

KM—Without giving anything away, something startling happens at the end of the book. Do you have any plans to write a sequel so we know what happens to the characters in the future?

JC—No! This was a hard novel to write! It required a lot of research. Originally, I spent a lot of time talking to DC acquaintances and friends about their jobs and campaign experiences. I didn’t have any personal knowledge of the complexities of running a campaign, especially a local campaign, as the characters do when they move to Texas so Jimmy can run for Railroad Commissioner. I interviewed someone who had run for the Railroad Commission and relied on him for a lot of information.I didn’t want to get things wrong, so I spent a lot of time researching esoteric political details. My next novel will include less-specialized subject matter.

KM—So tell us what you’re working on now. And I know you teach creative writing at George Washington University… how would you describe your own voice as a writer?

JC—I write very differently now than I did when I was in grad school. I like dialogue and I think it’s a strength in my writing—I use a lot of dialogue exercises with my students, because it can be a hard thing to do naturally. I also like a touch of humor in my books.

For my next work, I am thinking of a setting in a family-owned restaurant outside Chicago, which is where I grew up, incorporating shifting perspectives from the characters. And I think it will be funny.

KM—How about a few more nerdy writer questions… Do you have a particular writing process that works for you? And please share some of your favorite or most inspiring authors.

JC—Oh, authors: I like Curtis Sittenfield, J. Courtney Sullivan, Ann Patchett. The Girls Guide to Hunting and Fishing, by Melissa Bank—that was hugely inspirational to me.

In terms of a writing process, I’m really particular about what I do. I don’t go to coffeeshops or out in public—I like to hunker down in my office. I have some coffee, answer some emails, and then I dig in and write. And actually, in the beginning, I handwrite: I’ll fill up several notebooks before I switch to my computer. Nothing is as terrifying as an empty word doc—it helps me to organize some thoughts on paper first. I also try to write a good bit before re-reading anything.

Jennifer Close is the best-selling author of Girls in White Dresses and The Smart One. Born and raised on the North Shore of Chicago, she is a graduate of Boston College and received her MFA in fiction writing from The New School in 2005. She worked in New York in magazines for many years. She now lives in Washington, DC, and teaches creative writing at George Washington University.

From the Smarty Health Corner: Mammograms and Breast Augmentations

First time away from the kids is the...